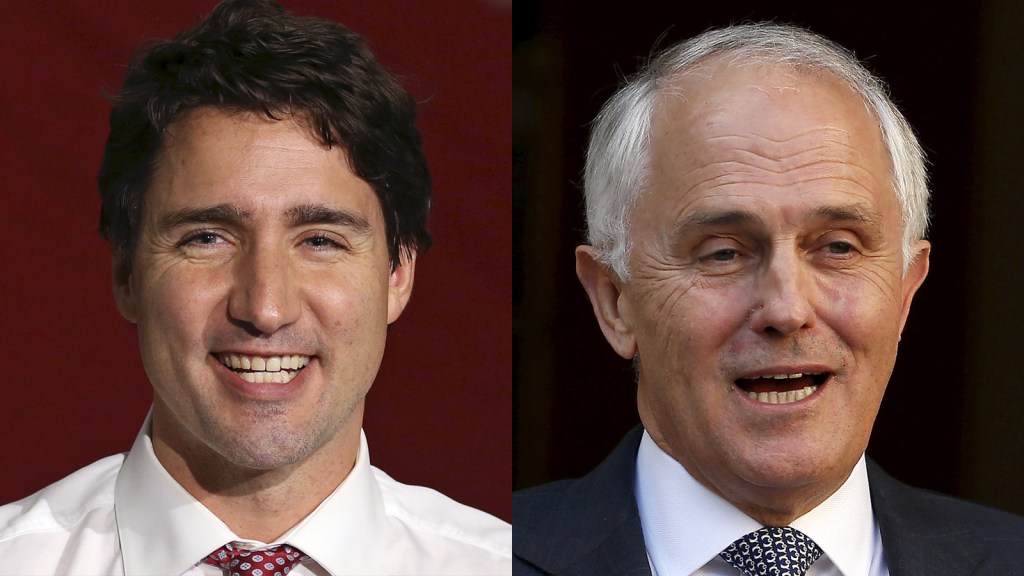 For the last several years, as the U.S. has grown more serious about addressing climate change, two of our staunchest allies have moved in the opposite direction. Australia and Canada have been governed by their respective conservative parties and they’ve been obstacles to global progress on climate change.

Thanks to their vast fossil fuel reserves and sprawling development patterns, Canada and Australia are the 10th and 18th biggest carbon emitters and among the highest per capita. As in the U.S., these countries’ fossil fuel–heavy regions are among the most conservative and so they have a lot of sway with the right-leaning party. Last year, Australia’s then-Prime Minister Tony Abbott tried to assemble an axis of inaction on climate change that would have included Canada and, he hoped, New Zealand, the United Kingdom, and maybe India. Canada was the only country to seemingly embrace Abbott’s message. At a joint press conference with Abbott last year, Canada’s then-Prime Minister Stephen Harper derided a carbon tax as “job-killing.” Both countries submitted underwhelming climate action pledges, known as intended nationally determined contributions (INDCs), ahead of the U.N. climate negotiations in Paris.

But just in time for those Paris talks, which begin on Nov. 30, Canada and Australia have traded in their right-wing prime ministers for more moderate ones who are likely to take a more cooperative approach to international climate policy.

In Australia, the new prime minister, Malcolm Turnbull, belongs to the same party as Abbott (the right-of-center party confusingly named the Liberal Party), but he’s not as right-wing as his predecessor. In September, with the Liberals trailing the left-leaning Labor Party in the polls, Liberal members of Parliament voted to dump Abbott and replace him with his more moderate rival Turnbull. Abbott last year declared that “coal is good for humanity.” In what Australian journalist Julia Baird called, in The New York Times, “one of the most ignoble moments in our history,” Abbott scrapped his country’s carbon tax. He made faint attempts at greenwashing with little substantive improvement in policy. As The Guardian noted last year, “Tony Abbott now claims to take climate change ‘very seriously’ but his position on the issue has barely moved since he described the science as ‘crap.’”

Turnbull is potentially a lot greener than Abbott, even if hasn’t offered any new domestic climate policies. Back in 2009, Turnbull attacked Abbott’s failure to address carbon emissions, saying Abbott’s climate policy was “bullshit.” Turnbull has supported carbon emissions trading in the past, and his promotion to prime minister prompted speculation that he would promote something similar again, but he said he would be sticking to Abbott’s climate policy, or lack thereof.

Turnbull could get more serious during the Paris talks, though. He plans to attend the U.N. conference himself — a significant change of approach from Abbott’s, whose administration snubbed previous climate talks. And the new environment minister is hinting that Turnbull might have a significant announcement to make on the first day of the talks.

The other, potentially bigger, shift is in Canada where, on Oct. 15, the voters elected a new prime minister, Justin Trudeau, leader of the center-left Liberal Party. He campaigned on a more pro–environmental protection platform than his opponent, Conservative Stephen Harper. Of course, it’s not hard to be greener than Harper, who has spent years rolling back environmental regulations and undermining climate action and climate scientists.

Trudeau has been vague on what his climate policy will consist of, pledging only that he will meet with the leaders of Canada’s provinces to come up with a climate action plan. During the campaign, he vowed to phase out fossil fuel subsidies and shift hundreds of millions toward clean technology. But he also supports the controversial tar-sands oil industry and has backed some of the pipelines it wants to get built, including Keystone XL. He proposes tougher environmental regulations for the tar sands, but that won’t make up for the fact that they produce some of the dirtiest, most climate-damaging oil in the world. This, and criticism from Canadian environmentalists, led The Guardian’s Suzanne Goldenberg to conclude that “it would be a mistake to see Trudeau or the Liberals as climate champions.”

Still, Trudeau too says he’ll attend the Paris conference personally, and he has encouraged Canada’s provincial premiers to do the same. That’s notable, though his new government won’t have put forward a new action pledge by then, he’ll just be coming with Harper’s weak INDC.

So climate activists are more optimistic about Canada and Australia than they were before the countries’ leadership changes. “With Harper and Abbott, we felt like we were banging our head against a brick wall,” says Jamie Henn of climate action group 350.org. “Maybe now it feels like the wall is made of a more malleable substance.”

“There’s no question that getting Harper and Abbott out of the international negotiations is a positive development,” says Anthony Swift, a staff attorney with the Natural Resource Defense Council’s international program and an expert on Canadian climate politics. “The reason is their efforts to undermine climate progress internationally. The second question is, ‘Will Canada and Australia become leaders on reducing emissions?’ That’s more of a question mark.”

The Canadian government, not unlike our own, could continue to pursue an all-of-the-above energy policy domestically while offering more positive leadership internationally. “They will definitely approach Paris differently than Harper would have,” says Keith Stewart, climate and energy campaign coordinator with Greenpeace Canada. “The Liberal Party is very committed to multilateralism, to the U.N. The Harper government was very disdainful of the U.N. and multilateral processes. [Trudeau’s government] will go and say they support the process.”

Trudeau has hinted at an approach to international climate negotiations that would combine modesty with more detailed commitments to keep its promises than past Canadian governments have produced. Canada never lived up to its emissions-reduction commitments in the Kyoto Protocol, for example. “Canada has a long history, especially under Liberal governments, of making these commitments but not bringing in policies to achieve them,” says Stewart. “So [Trudeau and his team] say it’s more important to deliver on policies, not [to make new] commitments.”

In Copenhagen in 2009, Canada made the same pledge as the U.S.: to reduce emissions by 17 percent from 2005 levels by 2020. Doing so would keep both countries on track for the 80 percent reduction by 2050 that scientists say is necessary to avert catastrophic climate change. But while the U.S. is on pace to keep its Copenhagen pledge, Canada is actually headed toward more emissions, not less, by 2020. Unlike most growing emitters, that’s not due to increased demand for electricity or gasoline. Canadian city and provincial governments are largely doing a good job of increasing energy efficiency, building mass transit, and reducing consumer emissions. It’s entirely because of the tar-sands boom.

“The tar-sands emissions have been growing so much that it’s really overwhelmed the decline in the rest of the oil and gas industry and in other provinces,” says Swift. “Canada cannot meet its targets without doing something to address expanding emissions from the tar-sands sector, and Trudeau has been weak on clarity on what he’s going to do [about it]. It’s more important that Canada offer a plan to meet the targets than that it offer stronger targets.” And consulting with provincial governments before making any big new pledges, as Trudeau says he will do, makes sense because Canadian provinces control many of the land-use, transportation, and resource-extraction policies that affect emissions.

Climate activists also note that, unlike the Conservatives, Liberal governments in Canada can be moved by leftward pressure. And so that pressure is being applied already. “If anything, having Trudeau gives us more reason to push hard,” says Henn. Trudeau is assuming office today, and climate activists will be there to greet him. “On Thursday, we’re kicking off our climate welcome: four days of sit-ins in Ottawa. We’ll be doing civildisobedience in front of Trudeau’s house. The point is to say, ‘It’s good you got elected, it’s good we got Harper out of there, but we want to see action.’” 350.org’s policy demands, says Henn, are a freeze on tar-sands developments, to block any expansion of the sector, and “a plan for a just transition to a renewable energy economy.”

Even if Trudeau disappoints on those issues, he’ll still be a huge improvement over his predecessor. “The Harper government went on a campaign to muzzle scientists who raised climate change as an issue and strip environmental regulations that might slow tar-sands expansion,” says Swift. “Trudeau is going to reverse a lot of those stances. We’re going to see more open discussion of climate in Canada. Much of the damage that Harper did to Canadian environmental review is likely to be undone.”