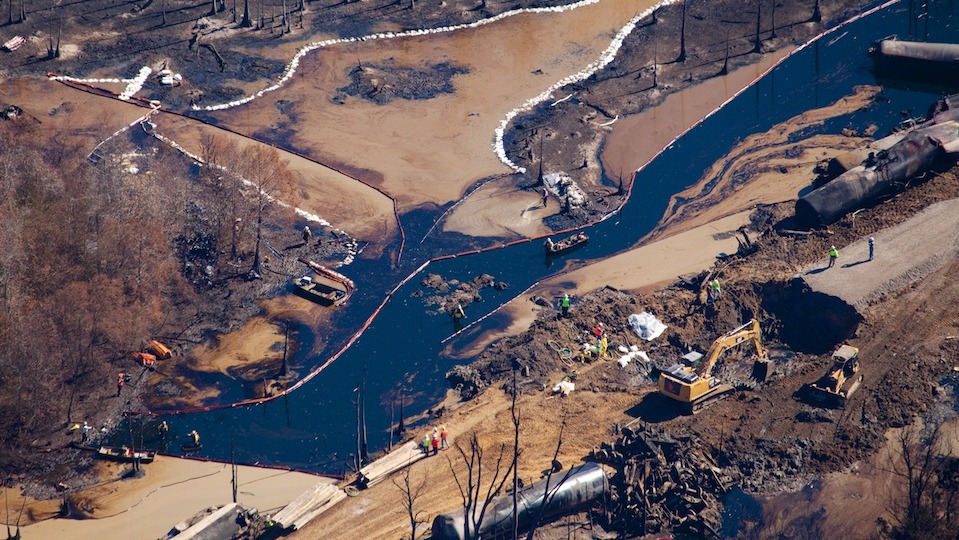 Today, the U.S. Department of Transportation proposed new rules for improving safety standards around transporting large quantities of flammable materials by rail. The chief concern here is the movement of crude oil and ethanol, which the federal government has been ramping up through recent decisions to expand the exploration and extraction of domestic oil and gas.

In a recent review of data from the Pipeline and Hazardous Materials Safety Administration, Politico found that train wrecks have done more than $10 million in damage as of mid-May this year, which is nearly triple the damage for all of 2013.

In a press statement, Department of Transportation Secretary Anthony Foxx called the proposal “our most significant progress yet in developing and enforcing new rules to ensure that all flammable liquids, including Bakken crude and ethanol, are transported safely.”

The Bakken oil mention is in reference to the train explosion last year in North Dakota, worsened by the fact that Bakken crude is more flammable than most all other oils. The Transportation department anticipates an increase in the volume of Bakken oil being shipped throughout the U.S., and across longer distances. On average, Bakken crude oil shipments travel over 1,000 miles from point-of-origin to refineries on the coasts.

Given that many of those trains pass through or near communities of color and low-income, environmental justice organizations have long been concerned about the movement of goods by rail, especially chemicals and volatile liquids.

“For African Americans, we’ve gone from the ‘underground railroad’ being a route to freedom, to today’s railway system being a source of pollution and hazard,” said Jacqueline Patterson, director of the NAACP’s Climate Justice Initiative. “Coal trains come through communities of color leaving a trail of coal dust on our cars and in our lungs.”

The U.S. spilled more oil from trains in 2013  than in the previous four decades combined.

Including major derailments in Alabama and North Dakota, more than 1.15 million gallons of crude oil was spilled from rail cars in 2013, according to data from the Pipeline and Hazardous Materials Safety Administration.

By comparison, from 1975 to 2012, U.S. railroads spilled a combined 800,000 gallons of crude oil. The spike underscores new concerns about the safety of such shipments as rail has become the preferred mode for oil producers amid a North American energy boom.

In light of this, “Any effort to regulate one of the threats facing oft-vulnerable communities — in this case trains carrying oil that are like ticking time bombs — is stridently welcomed,” Patterson said.

The National Environmental Justice Advisory Committee (NEJAC) has advised the federal government on how to improve its “goods movement” infrastructure for years. It released a report offering recommendations on this in 2009. The report focused not just on the goods moved, but also on the impacts of rail and freight transportation itself, as it moves through communities beset by poverty and poor access to quality healthcare. Reads the report:

[Goods] movement related‐ activities can have negative impacts on air quality and public health. Adjacent communities bear the burden of such activities resulting from the growth and demand for goods. Across the country there are many communities near goods movement infrastructure that consist of large populations of low‐income and minority residents.

NEJAC recently sent a letter to Environmental Protection Agency chief Gina McCarthy imploring her to check on whether the other federal cabinet agencies, including the Department of Transportation, are meeting with residents of the communities where trains are moving materials through, and asking for the agencies to create strategies to protect the health of those communities.

The Transportation department’s proposed rules focus more on the hazardous materials being carried. But they would also require carriers to perform a new analysis for routing trains that would be based on 27 safety and security factors. They would also require existing rail tank cars to be retrofitted to meet new performance requirements; those that can’t be retrofitted would be retired or repurposed.

The rail industry, of course, is freaking out about the new safety proposals. From Amy Harder at The Wall Street Journal:

Railroads, oil companies and railcar owners have been expecting new federal rules meant to improve the safety of oil shipments in the wake of several fiery train accidents. The proposed regulation could impact several industries. The railroads have been worried that slower speed limits could cause major gridlock, while oil companies have fretted that new rules about tank car volumes might prevent them from shipping all the crude they wanted.

I guess, but business as usual could mean more explosions and spills, which communities would pay for with their health and lives. It’s the same bellyaching the oil and gas industry had when the Obama administration imposed new safety regs after the BP oil disaster. These industries have to understand that it’s healthier and less expensive to be safe than it is to be sorry.