Why exploding trains are the new Keystone XL 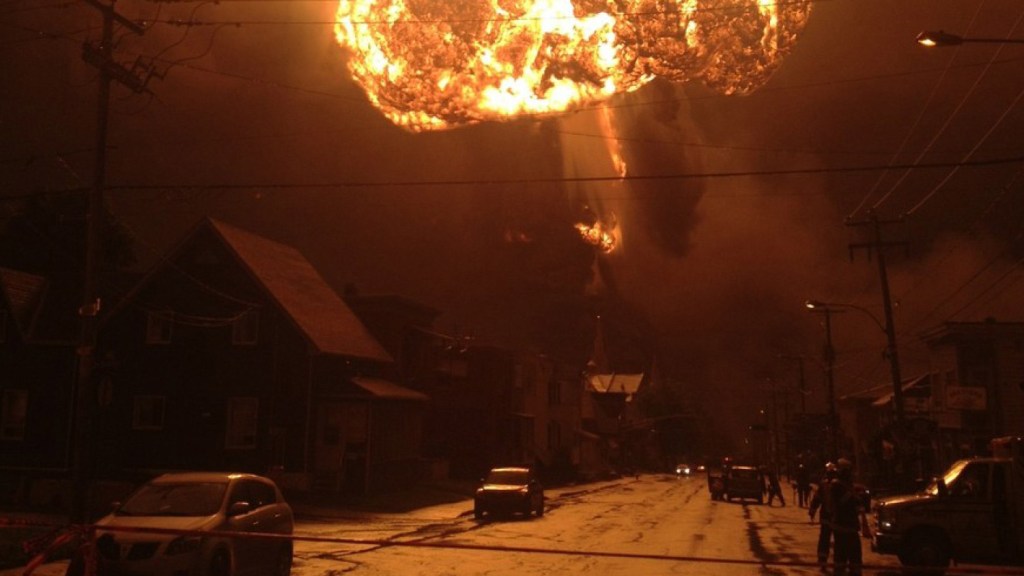 Why exploding trains are the new Keystone XL

Back in the olden days of 2011, when America was young and LMFAO’s “Party Rock Anthem” was a song that not everyone had gotten sick of yet, one of the most compelling criticisms leveled against the Keystone XL pipeline protesters went like this:

There is oil in the Alberta tar sands. Pretty cheap stuff – about $30 less a barrel than what you can buy overseas. There are people in the U.S., which is not far from this oil, who will pay money for it so they can drive to their jobs or the grocery store or wherever else they feel like going, probably while listening to “Party Rock Anthem.” And for this reason, even if Keystone XL or some other pipeline isn’t built, people will figure out how to move the oil anyway, because there is a market for it.

Did this happen?  James Hansen, the climate scientist who first emphasized that Keystone XL was a really big deal, still calls it “the big spigot” and maintains that its delays have slowed down the Alberta oil boom, by making it more complicated and expensive to ship extracted crude to refineries.

But the delays in building Keystone also led to a glut in crude oil that energy companies, in their hubris, had expected to be able to load into a pipeline, and couldn’t. And so they loaded the crude onto trains.

At that point, the game of Whac-A-Mole that is modern fossil-fuel activism moved into its next phase.

The trains were three times as expensive, but they had the key advantage of existing in the present moment. Railroads had already been built, which meant they had already been approved. “A big part of the popularity of rail is that the president can’t veto it,” Eric Smith, associate director of the Tulane University Energy Institute, told the Kansas City Star. In 2008, according to the Association of American Railroads, 9,500 carloads of crude oil were shipped by train. In 2012, that number was 234,000 carloads. Last year, it was estimated to be around 400,000.

In June of this year, Kinder Morgan, one of the largest energy companies in the West, canceled plans for a pipeline from Texas to California, named “Freedom,” which they once had high hopes for. “The cancellation,” wrote the Wall Street Journal, “underscores the growing difficulty pipeline companies are having in selling new large-scale projects as oil producers and refiners increasingly rely on railroads to ship crude oil. Once seen as temporary necessities to deliver oil from emerging oil-producing regions in Alberta, Texas, and North Dakota, rail cars have become a permanent fixture of the North American energy landscape.” Warren Buffet’s investment firm, Berkshire Hathaway, which had been buying up railroads and rail car manufacturers, reported that it was doing quite well for itself.

Then trains started to crash. There were a variety of reasons for this. Rail infrastructure in both the U.S. and Canada was old and not in particularly good repair. The DOT-111, a style of tanker car that made up 70 percent of the nation’s tanker fleet, turned out to puncture easily if the cars slid off the tracks, which they did. And tank car manufacturers didn’t have the infrastructure of their own to keep up with demand — the wait for new cars was over a year long.

And then there were the explosions. The crude that was being shipped from the Bakken shale field in North Dakota, which was sent almost exclusively by rail, seemed to explode a lot. Normally, crude, for all its faults, was not prone to doing this. But crude from the Bakken Shale was implicated in explosions in Lac-Mégantic, Quebec, the Alabama wetlands, and eastern North Dakota.

It’s still not entirely clear how this has come to pass. Bakken crude is light, which means it has frisky hydrocarbons. But also, possibly, the fracking chemicals used in its extraction were making it extra-flammable and corroding train cars from within.

In 2011, when Keystone XL first emerged as an issue, there were 35 train accidents involving crude — well over triple the yearly number in the decades before. In 2012, the number of accidents was almost 90. Critics of Keystone activists accused them of inadvertently exposing the environment to additional danger. An oft-cited report from the Manhattan Institute argued that pipelines are much safer, on the grounds that they’ve killed fewer people.

Even with this year’s bumper crop of train accidents, though, trains have spilled less oil than pipelines — meaning they’re still more dangerous than they should be, but, if you happen to be an ecosystem, they’re arguably safer than a pipeline. It’s also true that one consequence of digging up energy on our own turf is having more accidents here. Pollution that was once outsourced now occurs closer to home.

The pipeline fights are far from over, but as shipping oil by rail has expanded, so have measures by environmentalists to outmaneuver it. Railroad networks may have been built already, but the boom in transporting crude by rail has meant that railyards have needed to build new terminals to accommodate the increased traffic, and it’s getting harder to win permits for these terminals. Plans are in the works to enable at least six locations in California to refine crude brought in by train, but a proposed terminal in Pittsburg, Calif., has become a protest magnet. So has one in Benicia, which was expected to be approved this September, and instead is awaiting an Environmental Impact Review. Residents, concerned about the nearby Suisun Marsh, wanted to know whether the terminal would handle tar-sands crude; the spokesperson for Valero would only say that the crude would come from “North America.”

Toughening safety standards for transporting oil by rail has emerged as a priority in the Sierra Club’s Beyond Oil campaign. “These rail cars are destined for refineries or for export terminals, many of which are being proposed, and we’re going to fight those every step of the way, with every legal means available to us,” Michael Marx, director of the program, told Greenwire.

His words echoed, almost precisely, James Hansen’s rationale for fighting Keystone XL: “If we can block the approval and construction of new terminals that are intended to facilitate the exports of raw or refined crude, we can create a disincentive to actually produce this oil in the first place.”

In Albany, N.Y., which has emerged as a massive hub for oil by rail transport, local environmentalists have focused on opposing permits for even small things, like air-quality permits for a boiler that is being added to an existing rail terminal. Meanwhile, the California budget plan released by Gov. Jerry Brown this month increased allocations for the state’s Office of Oil Spill Prevention and Response by $6.7 million and added 38 staff members.

Crude oil has very little value until it can be shipped to a facility that can refine it. So it’s unlikely that this environmental game of one-upsmanship — between those who seek to dig up oil and sell it and those who want to drain the profit out of that practice — is going to end anytime soon. It could also, as an extra bonus, tighten up safety standards and oversight of rail travel in the country overall, which would be a good thing, since it looks like there’s going to be a lot more goods traveling freight in the future, oil or no oil.

And then, if activism manages to drain the profits out of rail travel, energy companies will move to another form of transportation. Until something large — a big idea, big legislation, a new technology — comes along and shifts the game entirely, Whac-A-Mole is the game as it is played.