Northwest wildfires: We broke the forests, now we need to fix them 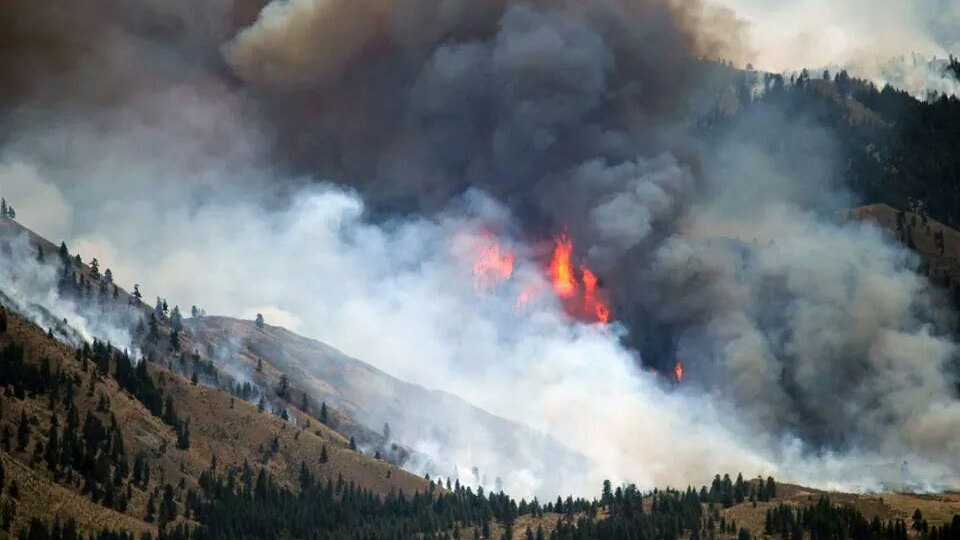 Northwest wildfires: We broke the forests, now we need to fix them

The Northwest is ablaze. Both Washington and Oregon are in official states of emergency as dozens of fires burn on forests and rangelands. Rainy weather in some areas has helped firefighters in the past few days, but according to the federal government’s InciWeb website, there are still 22 large fires burning almost a million acres in the two states. The half-contained Carlton Complex fire in north-central Washington alone has torched 150 homes and burned more than a quarter million acres, making it the largest in state history.

Welcome to the hot, flammable future, America. We’ve been setting ourselves up for these fires for a long, long time.

David Freedman has a strong piece on the past, present, and future of wildfire in America in the latest issue of Men’s Journal. Here’s a snippet starring Dave Cleaves, an economist and former professor who now advises the chief of the U.S. Forest Service:

In the late 1980s, Cleaves found himself wondering: Why was the U.S. being hit by more and more uncontrollable fires? Up until then, increasing investments in firefighting seemed to have rendered wildfires tamable. But in 1989, 873 structures burned down in California wildfires. In 1990, 641 structures were lost in a single fire. In 1991, more than 3,300 homes were torched in a firestorm near Oakland. Throughout the 1980s, an average of 3 million acres had burned each year in the U.S.; by 1991, the number exceeded 5 million acres. “Large parts of whole counties in the West were going up in single fires,” says Cleaves. “We’d never seen fires like that.”

Cleaves pored over the data and came to a disturbing conclusion, one that seemed almost preposterous at the time: A slow but accelerating rise in average temperatures in the West was tipping the wildlands into a state of unprecedented vulnerability that would render fires increasingly uncontrollable. Today, we call it climate change.

Turns out you don’t have to crank up the thermostat very far to make already flammable forests downright explosive. A 2009 study by the Forest Service and the universities of Washington and Idaho found that the area of Washington burned by wildfires is likely to double or even triple by the end of the 2040s, as trees are stressed by heat and drought, and succumb to bark beetle invasions.

But it’s more than just climate change that’s stoking these flames. More than a century of logging turned forests that were built to survive fires into tinderboxes of small, tightly packed trees. And many of our fire fighting efforts have only exacerbated the problem by allowing the fuels to build up further. Add a few hots days, a spark, and a little wind, and all hell breaks loose.

That’s exactly what we’ve seen in Washington over the past two weeks. Late spring rains spurred grass and shrubs to grow tall. Then a streak of hot days sent the mercury up over 100 degrees, turning it all into kindling. Lightning and high winds quickly blew up an inferno.

“Our fire behavior specialist told us that the rate of spread during that fastest period — we saw approximately 20 miles of movement in 6 hours,” says Glenn Hohler, a public information officer with the Washington State Incident Management team working the Carlton Complex fire. “That’s almost unheard of.”

There are some things we can do to reduce the threat of these massive fires. We can stop building homes in flammable forests, for starters. We can also send loggers into those forests to thin them out, clearing out brush and other so-called “ladder fuels” that allow fires to roar into the tree canopies. We can also set small “prescribed fires” to clear out understory in relatively controlled situations.

I saw some remarkable examples of this kind of work on a recent trip through north-central Washington. My wife, kids, and I camped on the Okanogan-Wenatchee National Forest, and spent a day hiking through a thinned out forest of stately larches. A handful of the trees were what the greenies like to call “old-growth” — hundreds of years old, and so broad at their base that the four of us, stretching fingertip to fingertip, couldn’t get our arms around them. Many of the other trees were second-growth, just a couple of feet in diameter — but standing at a good distance apart, thanks to crews that had come through with chainsaws and thinned the forest out.

To my knowledge, the fires haven’t touched those woods, but if they did, chances are good that they would burn through the undergrowth, lick at the thick, fire-resistant bark of those larches, and move on. The unmanaged private lands nearby, crowded with small trees, on the other hand, would go up like fireworks on the Fourth of July.

Hohler, whose day job is as a forest entomologist for the Washington Department of Natural Resources, says he’s seen just that where the Carlton Complex fire has burned. In some areas, he says, stands of big, dispersed trees have survived the flames. In another spot, where a thick, overgrown forest burned, he says, “an ATV — there’s literally nothing left but the metal frame. The ash layer looks like snowfall. It’s completely black, the most intense fire you can imagine.”

Sadly, in the aftermath of these current fires, we’re apt to see more of the later, and less of the former, as flames rage through thousands of acres of forests that have been subjected to logging — and deprived of natural fire — for decades. Meanwhile, funding for forest thinning and fire prevention is hard to come by, while we continue to throw millions at “fighting” fires that are far beyond our control.

The proposal is facing fierce opposition. Rep. Steve Pearce, a New Mexico Republican, has been a particularly outspoken critic of the administration’s intention to downplay firefighting in favor of forest management and fire prevention. He and some other politicians from the West want to keep all-out firefighting as the top priority – harking back to the 1930s, when the Forest Service’s so-called “10 am policy” promised to extinguish new fires by the next morning. They also want to bring in more logging and grazing as a self-funding form of thinning. “I want you to go back to the 10 am policy, ” Pearce said in one congressional speech.

But the war on wildfire, like the war on drugs, is a losing proposition. The harder we fight, the more we get burned.

Instead of fighting, we need to get serious about fixing. We broke these forests. Now we own them.