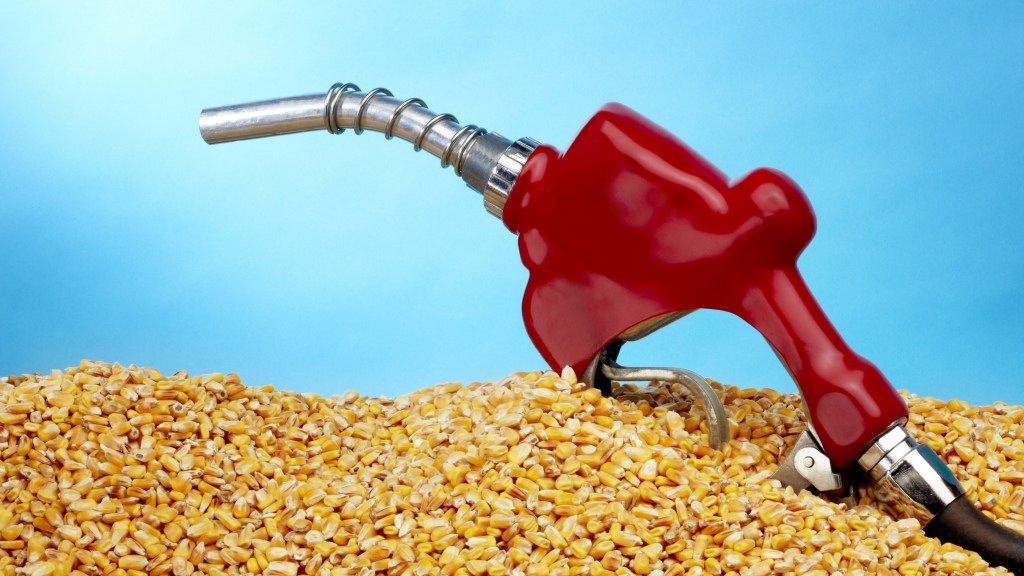 Here’s a riddle: When is the oil industry on the right side of a public policy fight? I know what you’re thinking: “Never.” But actually there is a potential exception: when their adversary is an equally selfish industrial complex.

On Friday, the EPA proposed to reduce the amount of biofuel required to be blended into gasoline to 15.2 billion gallons in 2014. That’s down from 16.55 billion gallons this year, and it is 14 percent lower than the goal Congress laid out in its 2007 expansion of the Renewable Fuel Standard program.

Powerful Midwestern agribusiness interests are not happy. But the oil industry is pleased — and so are environmentalists.

The EPA’s decision is a byproduct of good news: Americans are using less gasoline. If gas consumption were rising, it wouldn’t be hard to keep increasing the total amount of biofuels blended into the gas supply. But it turns out that U.S. gasoline consumption began a downward trend in 2007, thanks to shifts toward urban living, telecommuting, mass transit use, biking, and more efficient cars. So to keep up with rising biofuel requirements, refiners have had to increase the percentage of ethanol in gasoline. It’s currently at about 10 percent, which is considered by many to be the safe upper limit, or the “blend wall.” If the percentage goes any higher, it could damage cars currently on the road. The EPA disputes that, but car companies say their warranties won’t cover cars that use gasoline with 15 percent ethanol. Oil companies have been whining about the impracticality of the biofuel mandate and requesting relief.

The beneficiaries of the mandate are ethanol producers and corn growers, as corn ethanol is by far the most prevalent biofuel produced in the U.S. They benefit from consumers being forced to buy their product, especially since the inflated demand for corn drives up prices. So they are complaining about the EPA’s decision, attacking it as a setback for the environment and the renewable fuels industry. Here’s a typical quote, via Politico:

“EPA is proposing to place the nation’s renewable energy policy in the hands of the oil companies,” said Bob Dinneen, CEO of the Renewable Fuels Association, a major ethanol industry group. “That would be the death of innovation and evolution in our motor fuel markets, thus increasing consumer costs at the pump and the environmental cost of energy production.”

But don’t be fooled — there is nothing green about corn except the stalks. Corn-based ethanol is not reducing our carbon footprint. As Alex Rindler, policy associate at the Environmental Working Group, noted in a recent blog post, “An Environmental Protection Agency analysis showed that lifecycle [greenhouse gas] emissions from corn ethanol in 2012 were higher than from gasoline — and will be for years to come.”

Also, when you increase the price of corn, you cause farmers to fill in wetlands, cut down trees, and plant in sensitive areas. Sure enough, as the Associated Press reported last week, we are losing carbon sinks and increasing dangerous fertilizer runoff because of the ethanol mandate. The results are more net carbon emissions, more localized pollution, and more contamination of our waters. From the AP:

As farmers rushed to find new places to plant corn, they wiped out millions of acres of conservation land, destroyed habitat and polluted water supplies …

Five million acres of land set aside for conservation — more than Yellowstone, Everglades and Yosemite National Parks combined — have vanished on Obama’s watch. …

Sprayers pumped out billions of pounds of fertilizer, some of which seeped into drinking water, contaminated rivers and worsened the huge dead zone in the Gulf of Mexico where marine life can’t survive. …

The consequences are so severe that environmentalists and many scientists have now rejected corn-based ethanol as bad environmental policy.

Conservative organizations, such as the Competitive Enterprise Institute think tank, are praising the EPA’s decision while complaining that it does not go far enough. They would like to see the ethanol mandate eliminated altogether.

And they are right. The Renewable Fuel Standard is an example of good intentions gone awry. The American government already incentivizes environmentally irresponsible industrial agriculture through farm subsidies. We don’t need yet another program that distorts the free market, transfers wealth from everyday Americans to a handful of big corn growers, and contributes to land degradation, water pollution, and climate change.

Even if ethanol were marginally better for the environment than conventional gasoline, the ethanol mandate is based on a false premise. Better gasoline is not the solution to reducing CO2 emissions. Driving less, and driving more efficient cars, is the way forward. And Americans are already doing it. Instead of creating competing subsidies to undo the damage caused by our subsidies for gasoline and driving, we need to make cars pay their own social cost and put different transportation modes on an even playing field. That would be achieved through eliminating subsidies for oil in the tax code, raising taxes on gasoline consumption, and shifting transportation infrastructure investment toward biking, walking, and mass transit.

Conservatives and the oil industry will fight those reforms with all their considerable political power. But even a stopped clock is right twice a day, and conservatives are right about corn-based ethanol.