President Obama kicked off a three-day climate-centric tour of Alaska on Monday with a speech that had him sounding more apocalyptic than ever. Appropriately apocalyptic. Here’s a bit from that speech, delivered at the GLACIER Conference in Anchorage:

If we were to abandon our course of action, if we stop trying to build a clean-energy economy and reduce carbon pollution, if we do nothing to keep the glaciers from melting faster, and oceans from rising faster, and forests from burning faster, and storms from growing stronger, we will condemn our children to a planet beyond their capacity to repair: Submerged countries. Abandoned cities. Fields no longer growing. Indigenous peoples who can’t carry out traditions that stretch back millennia. Entire industries of people who can’t practice their livelihoods. Desperate refugees seeking the sanctuary of nations not their own. Political disruptions that could trigger multiple conflicts around the globe.

He pointed out the alarmingly rapid pace of change in the Arctic, employing some vivid imagery:

One new study estimates that Alaska’s glaciers alone lose about 75 gigatons — that’s 75 billion tons — of ice each year. To put that in perspective, one scientist described a gigaton of ice as a block the size of the National Mall in Washington — from Congress all the way to the Lincoln Memorial, four times as tall as the Washington Monument. Now imagine 75 of those ice blocks. That’s what Alaska’s glaciers alone lose each year.

Obama stressed the importance of reaching a global climate deal in Paris later this year, and of the U.S. providing leadership toward that goal: “I’ve come here today, as the leader of the world’s largest economy and its second largest emitter, to say that the United States recognizes our role in creating this problem, and we embrace our responsibility to help solve it.”

Though he noted that climate change is already well underway, he emphasized that there’s still time to avert the worst effects if we act aggressively now. He told conference attendees, “ask yourself, are you doing everything you can to protect [our planet]”?

Climate activists wish he would ask himself the same thing. If he did, he’d find that the answer is “no.”

Demonstrators made that point outside the conference venue while Obama was speaking, painting him as a hypocrite for calling for all-out climate action just weeks after his administration gave final approval to Shell to drill for oil off the coast of Alaska. As The New York Times reports, “Protesters lined the streets outside the conference center on Monday, holding a yellow flag with Shell’s logo that said ‘Hell, no!’ along with a giant banner that said ‘Save the Arctic.'” 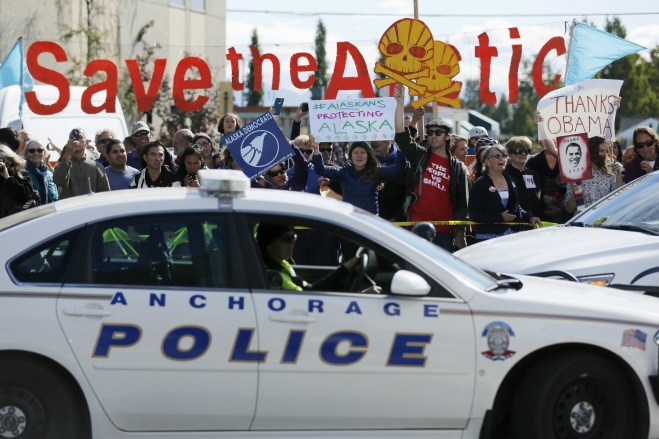 Obama’s speech made no mention of Shell and its drilling efforts, and also no mention of new policy plans to address climate change. He did say, though, that he intends to “announce new measures” in “the coming days.”

One of those measures might be rejection of the Keystone XL pipeline proposal, which is rumored to be coming soon. That wouldn’t make up for allowing Arctic drilling, but it would be another big sign that Obama is taking climate change — and the climate movement — seriously.