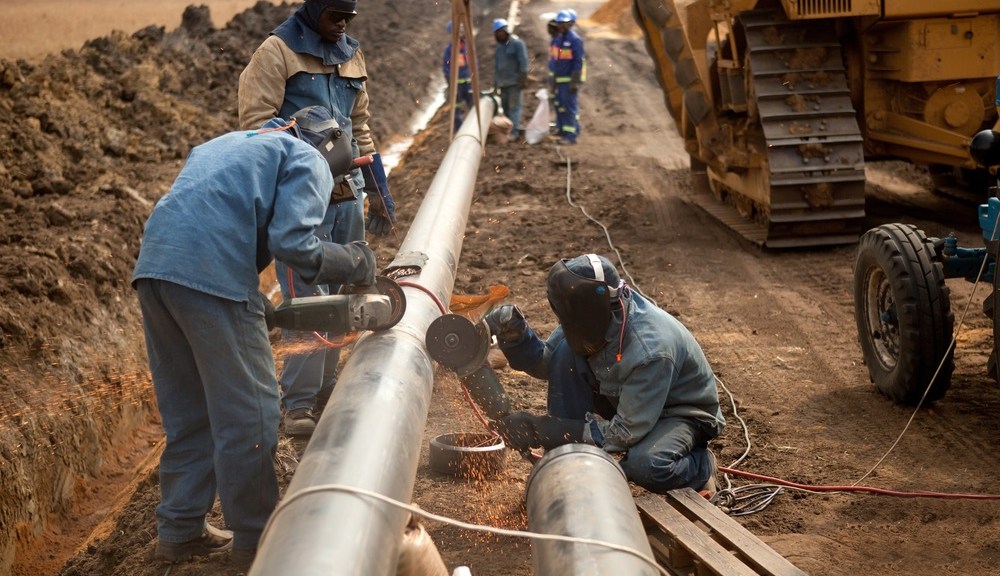 So many pipelines are being built and expanded in the U.S. that refiners have stopped caring whether TransCanada's receives approval Shutterstock
Climate & Energy

Wednesday at 10:45 a.m., Keystone XL South was supposed to begin piping tar sands crude from  Cushing, Okla. to refineries in Texas. That’s what the pipeline’s builder, Transcanada, had announced.

The pumps that keep crude moving through the pipeline were running last Thursday, as TransCanada performed last-minute tests of the system. But on Friday they went silent, according to observers in the area, and so far it looks like they haven’t started up since.

“Last week we heard info from two different sources that they had a major leak,” says Kathy DaSilva, of Nacogdoches, Texas, who has been involved in the fight around KXL South for the last three years. “But we have not been able to verify or find where the leak was.”

Leaks are a big concern for DaSilva. While the national campaign against Keystone XL was framed as a climate change issue, regionally, it was about water. When TransCanada split Keystone into two pipelines — North (which crossed the Canadian border, and which Obama has yet to approve) and South (which crossed several states, but no borders, and therefore needed no presidential approval, but then somehow mysteriously got it anyway) — attention shifted to the Obama/Romney race, and KXL arguably became a regional issue again.

But: It’s a big region. The Carrizo-Wilcox aquifer, which the pipeline passes through, supplies drinking water to 60 counties in Texas. This summer, people living along the path of the pipeline noticed that segments that had been completed and buried six months ago were being dug up and replaced.  The replacements were impelled by “an abundance of caution” at Transcanada, a spokesperson said.  TransCanada’s CEO Russ Girling called it “the safest oil pipeline built in America to date.” DaSilva has her doubts.

In September, the Pipeline and Hazardous Materials Safety Administration (PHMSA), which is charged with regulating the pipeline, posted two notices of violation about contractors working on the pipeline. DaSilva asked that the pipeline be retested before it reopened, but the PHMSA turned her down. She later found that the agency closed both cases the day that the letters were sent, with no signs of enforcement. “It was a case of covering their asses,” she said.

Later that night, DaSilva was planning on going out with NacSTOP (Nacogdoches County Stop Tar Sands Oil Permanently) and the Autonomous Light Brigade, setting up LED signs in front of the Nacadogches Memorial Hospital. “It’s considered a ‘green’ action or ‘safe’ action,” DaSilva said. “People who might not be so comfortable in participating in what might be an arrestable action, this is a way to participate.”

The tar-sands pipeline campaign has been a recent example of just how much Homeland Security has complicated direct action protests in the U.S. A waitress and youth pastor in Oaklahoma faced threats of felony terrorism charges from local police after they unfurled a handmade Hunger Games-inspired banner (The Odds are Never in Our Favor) inside the headquarters of Devon Energy. In Michigan, four protesters go to trial on felony charges later this month for locking themselves to construction equipment that Enbridge, TransCanada’s main competitor, was using to replace and increase the capacity of 6B — the pipeline that once, notoriously, dumped 800,000 gallons of tar sands crude into the Kalamazoo River.

During the Kalamazoo river leak, Enbridge employees responsible for watching remote sensors were monitoring data from multiple pipelines, working 12-hour shifts. After the spill happened, 16 separate alarms went off. But with these sensors, false alarms are so common, and so expensive, that the monitors assumed that what looked like a leak was just a large bubble working its way down the line. It was 17 hours before Enbridge realized it had a spill.

According to data from PHMSA, between 2002 and July 2012, remote sensors detected only 5 percent of the nation’s pipeline spills. Pipeline company employees who arrived at the scenes of accidents reported 62 percent. The other 22 percent were reported by the general public. Enbridge is responsible for $3.7 million in damages for the Kalamazoo river spill. Still, its stock is going gangbusters. Its five-year average return has been 133 percent, while TransCanada’s has been 45 percent — a circumstance that the Financial Post credits to the delays and regulatory uncertainties that still surround KXL.

TransCanada has tried to diversify away from Keystone and focus more on Canadian pipelines. It also renamed KXL South as the Gulf Coast pipeline right around the time the pipeline was split, possibly hoping a new name would lift the taint of controversy. Meanwhile Russ Girling, TransCanada’s CEO, argues that after five-plus years of regulatory scrutiny of Keystone XL, TransCanada is better equipped “than anybody in the marketplace” to get pipelines approved.  “I’m comfortable we can get there,” he said.

“I never, ever wanted to know this much about pipelines,” says DaSilva. Now that KXL South is complete, that knowledge has shifted from how to stop the pipeline to how to live with it as safely as possible. The Kalamazoo leak could have been detected hours earlier if police who responded to a 911 call about a petroleum smell near the river had investigated more closely. Warning signs posted along KXL South identify it as a crude oil pipeline, with no mention of its carrying heavy, rather than light, crude. You need a very different approach to cleaning up a heavy crude spill than a conventional oil spill — so the next step for DaSilva and her allies is to pressure TransCanada to change the signs so a spill’s first responders know what they’re dealing with.

Even now that the Keystone XL South is complete, lawsuits filed against its construction by landowners continue to work their way through the court system. The lawsuits argue that the eminent domain used to build the pipeline violates court rulings that say that eminent domain can only be used for infrastructure projects that benefit more than one company.  “I don’t know if they’ll ever see their money,” says DaSilva, of people who rejected payouts from TransCanada and went with litigation, “but their trees are gone and the pipeline is there.”

Meanwhile, DaSilva and other pipeline activists will be looking for people along the route of KXL South, talking to them and telling them that if they notice patches of dead vegetation or any other signs of an underground leak, they should relay that information to the newly formed Texas Pipeline Watch, as well as to the EPA. “We know the reality,” says DaSilva. “If we are not out watching, we are going to have a contaminated aquifer. We’re going to have to police this ourselves and document it ourselves.”

It is at the point where she mentions the pipeline’s neighbors that her voice unexpectedly brightens. She has met so many wonderful people, she says: “That’s one positive from being in this three-and-a-half-year fight.”