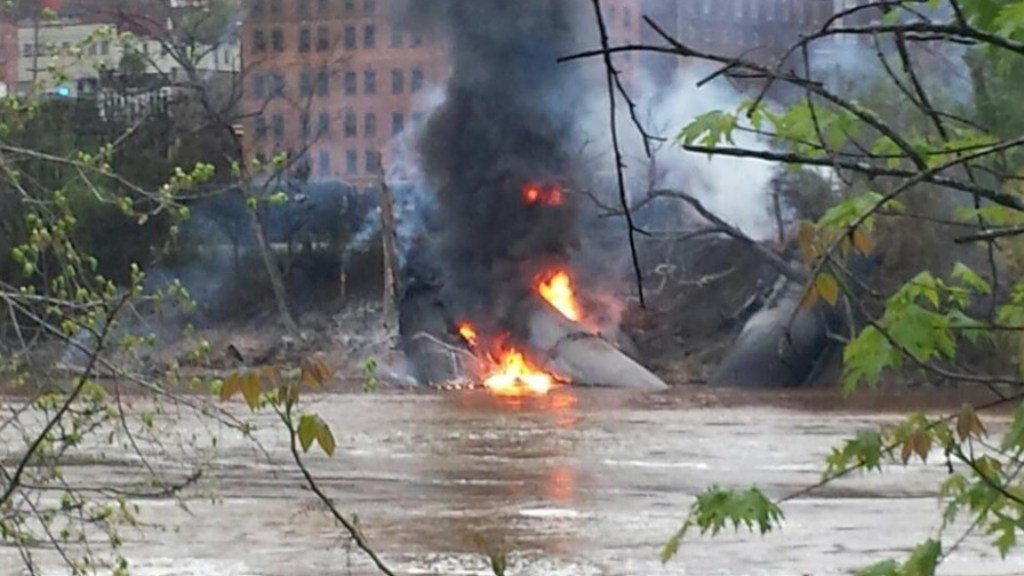 Oil trains keep exploding across Canada and the U.S.  Canada has at least started making moves to get the most dangerous, puncture-prone cars off its rails. The U.S., not so much.

So now we have the latest oil-train disaster: a derailment and explosion in Lynchburg, Va., which contaminated a source of drinking water and triggered the evacuation of hundreds of people.

Rail company CSX said that 15 cars of its freight train, which was traveling from Chicago to Virginia, derailed Wednesday afternoon in downtown Lynchburg, a city with a population of about 75,000. Three cars laden with oil exploded and tumbled into the James River, which feeds into Chesapeake Bay. Officials estimate they were carrying 50,000 gallons of oil. “The ensuing conflagration ignited oil on the surface of the river, sent flames and smoke hundreds of feet into the air, forced evacuations of downtown businesses and homes and rattled the nerves of hundreds of downtown workers,” reports the Lynchburg News & Advance.

No injuries were reported, and the flames were extinguished within a couple of hours. Emergency responders are trying to contain the oil using floating absorbent boom.

Here’s one of the eyewitness accounts published by the News & Advance:

Travis Uhle came out of the kitchen at the Depot Grille, at the bottom of 9th Street, when he first heard a loud, harsh squeal.

“We noticed that the train sounded a lot louder than usual,” he said. “The whole floor shook.”

The manager-in-training peered out the window to find a car lifting off two wheels before tipping on its side.

“That’s when flames just started going up,” Uhle said. “The train and the rails are toast.”

The local CBS affiliate, WTVR, reports that a number of cities draw their drinking water from the James River:

Richmond will consider using an alternate water source due to the train derailment, [said Bob Steidel with the Department of Public Utilities], if needed. They will continue to monitor the situation and test the water.

Henrico is not switching from the James River, said William Mawyer, Assistant Director for Henrico Public Utilities. He said that intakes are well below the surface of where crude oil resides. He said that they would inform residents of any changes to the water supply, and are taking precautionary measures by filling its water storage tanks as a precaution.

Chesterfield gets water from the city, Swift Creek Reservoir and Lake Chesdin. They are isolating and shutting down the lines that come from Richmond and will service the entire county using water from the other two sources.

Here’s a glimpse of the mess this latest pyrotechnic shit show left behind: