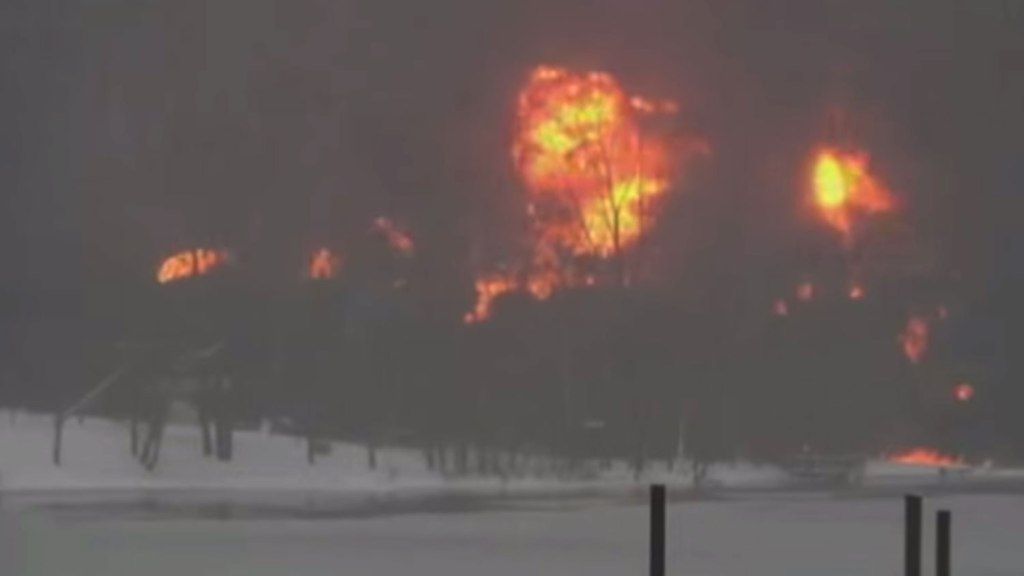 Two tanker trains full of crude oil have derailed and burst into flames in the last few days, one in West Virginia and one in Ontario. They’re the most recent examples of a phenomenon that’s increasingly common as fracking for oil becomes a top American pastime.

The West Virginia accident happened on Monday — and the aftermath stretched well into Tuesday. The AP reports:

Fires burned for hours Tuesday after a train carrying 109 tankers of crude oil derailed in a snowstorm alongside a West Virginia creek, sending fireballs into the sky and threatening the nearby water supply.

Hundreds of families were evacuated and two water treatment plants were shut down after dozens of the cars left the tracks and 19 caught fire Monday afternoon, creating shuddering explosions and intense heat.

Part of the formation hit and set fire to a house, and one person was treated for smoke inhalation, but no other injuries were reported, according to a statement from the train company, CSX.

The train was carrying crude from North Dakota’s Bakken shale and was on its way to a terminal in Yorktown, Va., not far from where another train headed to the same terminal derailed last April.

The West Virginia derailment was the second in 48 hours — the first occurred Sunday in a remote area of Canada. The CBC reports:

The Transportation Safety Board and environment officials were investigating Sunday at the scene of a derailment of a Canadian National Railway train near Gogama, in Northern Ontario.

The train, heading to eastern Canada from Alberta, derailed shortly before midnight about 80 kilometres south of Timmins, Ont., a CN spokesman said. Canada’s largest rail operator said 29 of 100 cars were involved and seven had caught fire.

An unknown amount of oil spilled into the snow at the site of the derailment.

Oil shipments by rail have increased by more than 400 percent since 2005, and with the trains have come many minor disasters and a few major ones. The worst yet occurred in 2013, when a derailment in Lac-Mégantic, Quebec, killed 47 people.

Since then, U.S. and Canadian officials have started moving toward requiring railroads to switch from 1960s-era tanker cars to sturdier, less accident-prone ones, but a timeline for the shift hasn’t yet been set. Even when it is, the new rules may not be effective enough — Reuters reports that the train that derailed in West Virginia was pulling newer, supposedly tougher railcars.

The West Virginia derailment is also the latest in a series of fossil fuel-related disasters to affect that state’s water supply. The biggest recent example came a year ago when Freedom Industries dumped 10,000 gallons of MCHM — an industrial chemical used in the coal-cleaning process — into the Elk River. A month later, more than 100,000 gallons of coal slurry poured into Fields Creek, a tributary of the Kanawha River that swallowed up an oil-filled railroad car yesterday.

*Correction: This article originally misstated the increase in crude oil shipments by rail in recent years. Shipments have risen by more than 400 percent since 2005, according to the Association of American Railroads’ annual report on hazardous materials, as reported by the National Transportation Safety Board.