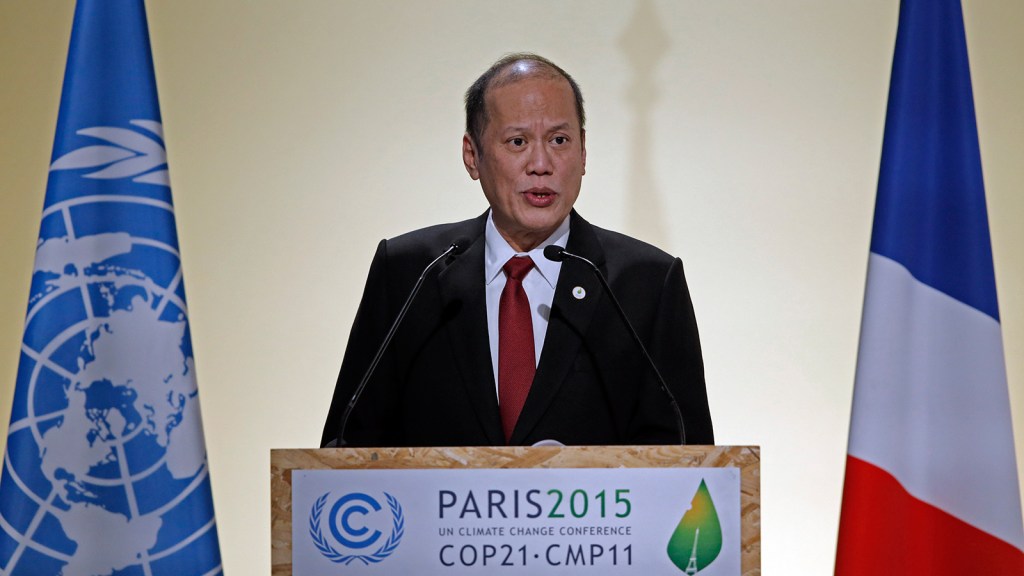 The Climate Vulnerable Forum (CVF), a group of 20 developing Global South nations that are most susceptible to the impacts of climate change, is also meeting in Paris this week. While world leaders are seeking a 2 degree C temperature increase target, the forum, along with the Alliance of Small Island States, is seeking 1.5 degree C increase. The stricter the warming limit the Paris summit agrees on, the better protected these most vulnerable nations will be.

Philippines President Benigno Aquino, the CVF chair, addressed climate justice straight on at a forum gathering in Paris on Monday. The Philippines, he explained, has a wet season and a dry season; that wet monsoon season typically ends in October but has been creeping later into the year, including into Christmas. More frequent and powerful storms not only displace residents and run up costs; they kill people. He also pointed out that the Philippines is not alone:

In this, our country is not an isolated case. Those of us who compose this Forum, and many others who are also exposed to a high concentration of risk, experience climate change in the starkest possible terms. For example, since 2010, in the CVF-member countries, an average of more than 50,000 deaths have occurred every year due to climate shocks. Up to 40 million people may potentially be displaced due to rising sea levels, which threaten to engulf entire nations in the Pacific.

Even beyond such phenomena, we are all aware of how the discourse on development and inequality, within and among nations, is intertwined with climate change. Invariably, those who have the least bear most of the burden. We are getting better at adaptation. However, the reality persists: People still die and whole communities are displaced; businesses are affected, thus stunting economic activity. Funds that could otherwise be used for other development needs and services are channeled towards the costly efforts involving relief, rehabilitation, and reconstruction. By some estimates, annual losses amount to at least 2.5 percent of GDP for us in the CVF — this, despite the fact that we collectively contribute less than 2 percent of current greenhouse gas emissions.

Without exception, as Aquino points out, those people who have the very least are bearing the very most when it comes to climate change. And only diligent commitments to alter the way we approach social and economic inequities will change that.

The Paris talks are all about what individual nations will contribute when it comes to lowering emissions. But for the CVF, which now represents about one billion people, a single nation’s actions aren’t enough — it’s going to take shared sacrifice all around. Aquino wrapped up his remarks by stressing collective responsibility:

In the Philippines, we have as one of our core philosophies the idea of “bayanihan.” Loosely translated, it means communal action borne of communal responsibility. Back home, we have been harnessing the energies of bayanihan towards national transformation: In instituting good governance, in engaging the engines of economic growth, and in creating a more compassionate and inclusive society. We have called on the spirit of bayanihan to lift up our countrymen during every storm that has made landfall within our islands.

This spirit of bayanihan, dear colleagues, is exactly the same spirit that informs the Climate Vulnerable Forum. It is also at the core of what we launch today: the Manila-Paris Declaration, which embodies our shared aspirations for a world that is more just and more sustainable. Individually, we are already survivors; collectively, we are a force towards a fairer, more climate-proactive world. Many of us have already been taking pioneering action, particularly in terms of climate finance. Let us not only enhance and intensify such work, but also fully leverage our solidarity in ensuring that the remaining barriers towards concerted action and knowledge sharing are broken down — so that we may in turn link arms and march on together towards a more resilient, more inclusive future.

You can read Aquino’s remarks at the gathering in full, and be sure to check out the Manila-Paris Declaration while you’re at it.