Shell brought its enormous Polar Pioneer drilling rig into Seattle’s port on Thursday — and Seattle is not happy about it.

The oil giant intends to use the city as a staging ground for its drilling operations off the northwest coast of Alaska this summer. If the company’s disastrous Arctic drilling attempts of 2012 are any indication, we can expect a big, fat mess. Even if Shell somehow manages not to spill huge quantities of oil in the rough, icy waters of the Chukchi Sea, then that oil will just get burned, worsening the climate crisis.

Shell is coming to town over strong objections from the mayor, the entire city council, and many of Seattle’s famously liberal residents. Even the city’s port commissioners, who originally gave the OK for Shell to use the port as a base, voted on Tuesday to ask the company to delay the rig’s arrival until questions about permits could be resolved.

This illustration from Randy Poplock pretty much nails the company’s attitude: 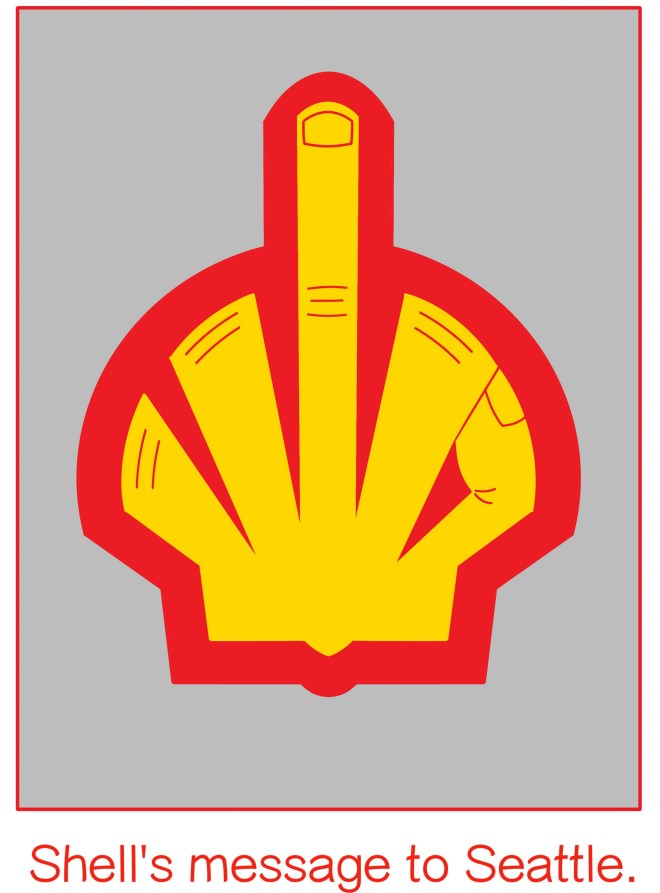 Seattleites and climate activists from around the Northwest are flipping the bird right back.

A handful of activists in kayaks greeted the rig on its arrival:

Many more “kayaktivists” will be taking to the water on Saturday, and landlubbers will be protesting too. From the sHellNO activist group:

From May 16 to May 18, join us in Seattle for three days of creative, people-powered resistance to Shell and the climate crisis. We will converge on the Seattle waterfront by land and sea, transforming Terminal 5 and Harbor Island into a festival of resistance that will nonviolently block Shell’s preparations for Arctic drilling. …

These events will build to a day of Mass Direct Action on Monday, May 18, when we will use nonviolent action to SHUT DOWN SHELL and all operations related to their Arctic expedition. …

Fifteen years after the WTO protests, we will remind the world that corporations like Shell that abuse human, environmental, and labor rights are not welcome in Seattle.

Even the sea lions are protesting:

If sea lions had middle fingers, both of this guy’s would definitely be raised.