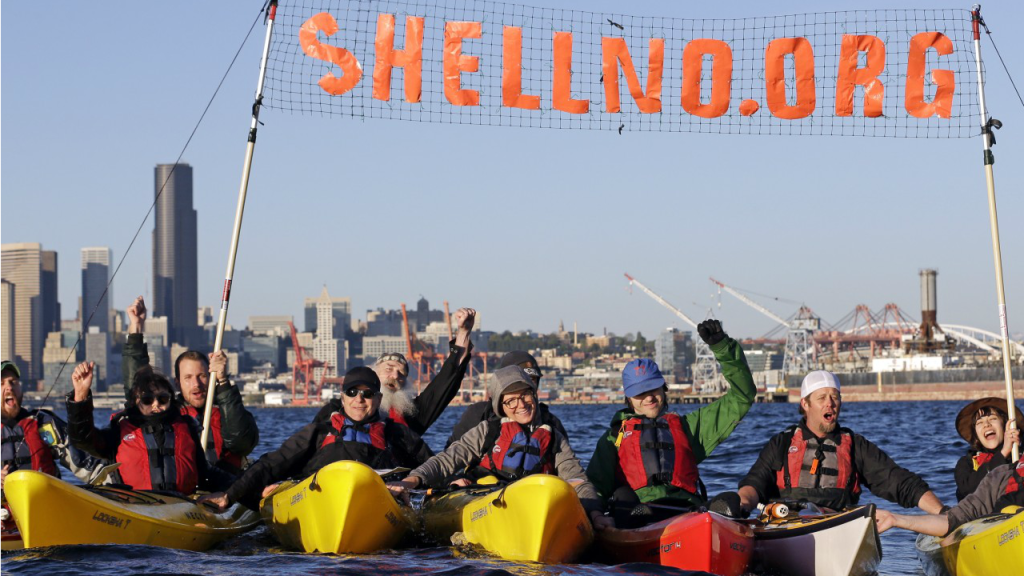 Location, location, location — the realtor’s mantra holds true, even in this virtual age. And right now, this weekend, the white-hot center of the environmental world is Seattle, Wash., because it sits on some of the most crucial real estate on planet earth.

Seattle has long had a strong green tradition (why else would Grist make its home there?). It grew, perhaps, from the fierce attachment to the remarkable natural beauty of Puget Sound, of Mt. Rainier looming over the skyline. In any event, world-class local groups like Climate Solutions and the Sightline Institute have helped the Pacific Northwest move toward a low-carbon future more quickly than most of the world.

And those intellectual roots have produced strong activist blossoms: News came yesterday that the University of Washington had decided to begin divesting from coal, after passionate student campaigning. It’s the richest public university anywhere on earth to take that step, and the school with the biggest student body to divest so far — and others are right behind. Faculty at Seattle University, for instance, recently released a powerful letter calling on their Jesuit institution to divest. It’s all a tribute to former mayor Mike McGinn, who made the city itself the first municipality on earth to start down the divestment path.

But Seattle grew into a major city not just because of its beauty. It was, and is, strategically placed, a great port that opened the interior of the continent to the Pacific and to the far north. It was the Klondike gold rush that really made the city, as it swelled in size and wealth to support the army of gold miners scurrying north. It’s always been a place to load and unload: My uncle was a longshoreman on the Seattle docks, and I can recall him taking me as a boy to the union hiring hall, filled with men waiting to see if they’d get a day’s work loading timber or wheat.

That strategic location has made Seattle central in the battle to keep coal in the ground — you can’t endlessly mine the carbon of the Powder River Basin if you can’t send it off to Asia, and you can’t easily send it off to Asia without heading through the general vicinity of Seattle. The fight over Washington’s railroads, and over proposed coal ports at places like Longview and Cherry Point, are ongoing epic battles.

But even they can’t quite match this weekend’s symbolism, as the ugliest symbol of the old era — Shell’s giant Arctic drilling rig — floats past Discovery Park and into the port of Seattle. That rig represents everything wrong with the world we live in, every misplaced priority and squandered opportunity. Never forget the history: Shell watched as rising global temperatures melted the Arctic. The loss of one of the planet’s biggest physical features didn’t convince the company it was time to move into, say, the solar business. Instead, it saw an opportunity — a melted Arctic was now drillable. For more oil. So maybe it could melt the Antarctic too.

Washington — the other Washington — has been complicit in this scheme, granting Shell the license it needs to get to work. Which is why it’s so important that this weekend Seattle will remove Shell’s social license: The sight of thousands of “kayaktivists” blockading the grim drill rig is a joyful reminder of who really owns the future. Already they’ve persuaded Seattle’s new mayor, Ed Murray, to try and block Shell’s use of the port. This rig needs to be hounded from harbor to harbor, treated like the plague-carrying beast that it is.

Seattle has demonstrated how to build the future: Its economy today rests on moving data more than moving stuff. Now it will act in defense of its prosperity — to keep its snowpack from melting further, or the seas that surround it from rising higher. And in so doing it will, this weekend, galvanize the rest of the planet.