I wrote yesterday that coal country is largely lost to Democrats, and that’s fine; they don’t need it to put together consistent national majorities.

Lots of people (via Twitter and email) complained that of course those voters are going to the GOP, since at least the GOP offers them sympathy on culture-war issues, while the Democrats offer them nothing. Why should they vote Dem?

Often paired with such complaints is the notion that Dems ought to propose some kind of large-scale federal program to ease the transition of miners and their families away from coal — a bold, populist, New Deal-style development program that would show coal miners (and other rural whites) that Dems care about them.

I was going to do a deep dive on this, but it turns out there aren’t many details or concrete proposals out there, and this kind of thing has a snowball’s chance in hell of passing Congress in a time of (ill-advised) fiscal retrenchment, so I’m not going to do a multi-thousand-word geek-out. Instead, just some idle musings.

When it was first created in 2010, ARDI sought input, which yielded a set of recommendations from a coalition of social groups called the Appalachian Transition Initiative, including the Mountain Association for Community Economic Development and Kentuckians for the Commonwealth. (I found it via Ken Ward Jr., your go-to guy on coal in Appalachia.)

This reminder toward the beginning of the paper is worth remembering:

Appalachia as defined by the Appalachian Regional Commission is a very large and diverse area, and should not be conflated with Central Appalachia. Over the last fifty years, there has been real improvement in economic status for much of the Appalachian region. While absolute improvement has also been made in Central Appalachia, the gap between that region and the rest of the country is as large as ever, and the region remains a large pocket of economic distress. … Additionally, coal mining and in particular mountaintop removal does not characterize the economy of the entire region—only a targeted subregion located in Central Appalachia.

Here’s a map from ARC of all Appalachian counties, with the economically distressed ones shown in red: 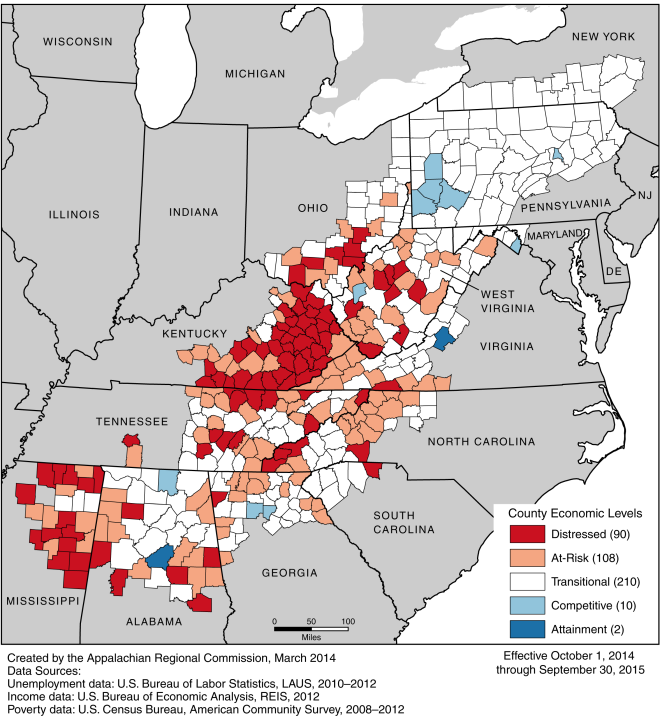 The paper’s recommendations are a great deep dive into the kinds of programs and initiatives that would help the region’s hardest hit and build social and entrepreneurial capital, focused mostly on sustainability — renewable energy, environmental remediation, local food.

For a glimpse into what state leaders and officials are thinking about diversifying Appalachian economies, check out this account of a West Virginia discussion forum from Ward Jr. All sorts of analysts and advocates have good ideas about wealth creation and diversification, but it turns out that state officials don’t have much to offer. They’re giddy over the natural gas fracking boom in the north of the state, but when asked about dying coal counties, they wave their hands at education and public-private partnerships.

Well, not all of them: last month, Reps. David McKinley (R-WV) and Peter Welch (D-Vt.) proposed some legislation: “the Healthy Employee Loss Prevention Act, a bill to provide assistance to miners with retraining, job searches and relocation.” There’s some precedent for this kind of thing, though it seems somewhat meager relative to the scale of the problem.

So … all this raises a few questions and issues for me.

What can the feds do without reliable partners?

The kinds of things proposed by the Appalachian Transition folks are great. But the largely Republican local and state officials in these areas hate Obama and the federal government (despite living off its largesse for years). I doubt they would welcome a grand Big Government plan to completely reshape the region. I doubt Limbaugh-listening Appalachians would welcome it either. Remember, Obamacare helped hundreds of thousands of them immeasurably, especially via Medicaid expansion. But they still think it’s a socialist plot; they still vote for politicians who vow to repeal it. What federal assistance program could possibly survive the distortion field of right-wing media?

And there’s a lot of corruption in these areas too. (Unfortunately it tends to go along with poverty and attendant social ills.) How could even a well-funded and well-meaning federal program survive being filtered through the hands of officials who would undoubtedly funnel lots of the money to, ahem, public-private partnerships run by their buddies? How much of the assistance would reach those truly in need, or be spent on legitimate long-term economic development? After all, the region has a long history of being exploited for the benefit of a few wealthy oligarchs — and the oligarchs would be in charge of the money.

And even if it was passed and implemented well, what are the chances it would lay the infrastructure necessary for long-term economic development? Because …

The federal government can do lots of things, but directing the course of regional economies is not one of its strong suits. Read this grim New York Times account of the Workforce Investment Act, a $3.1 billion program meant to retrain workers for promising jobs. It’s a mess, leaving lots of people in debt and still unable to find work.

There’s a long history of economic development schemes not working very well, not only in the U.S. but in all sorts of countries. (Europe has its own problems with declining coal areas.) There’s lots of loose talk among state officials and others about creating a biotech cluster, or a cleantech cluster, or a high-tech cluster — every state says this — but creating one from scratch, especially in areas like Central Appalachia with little of the infrastructure or skilled workers needed, is extraordinarily difficult. Just dumping money into the area won’t do it. It’s not just a knob you can turn.

Of course the feds could radically simplify things and just write every coal miner a big check, but then …

Why coal miners only?

The country is full of communities suffering after long-time supporting industries have moved out from under them. All over broader Appalachia, all over the South and Midwest, all across the country in rural areas and small towns, the manufacturing and other high-skilled jobs that sustained a middle-class life are vanishing. After the Lesser Depression, even in areas that returned to pre-recession levels of employment, the good jobs have gone, to be replaced by low-wage service jobs. (Read this story on Lima, Ohio. It tells the story in achingly, tragically human terms.) The gains of economic growth are going almost entirely to the wealthy, while for most workers, wages are stuck or declining.

We chose, more or less, to offshore manufacturing — or at least hurried it along with policy choices. In some regions new industries are moving in (like advanced batteries in the upper Midwest), but in most areas, people are just making do with crap jobs, temp jobs, “contract jobs,” all sorts of jobs that put upward mobility out of reach. So do we owe those workers a special debt too?

Coal-mining areas have it particularly bad, for sure. But I’m not sure I see a clean line between coal miners and the many, many other workers screwed by shifts in the modern economy. In fact …

My preference would be for universal programs, which are much cleaner and less prone to unaccountability and waste. For instance, rather than target one group of dispossessed workers, why not help all workers with a universal basic income? Even many conservatives are coming around behind the idea, as it’s a way of helping the poor with minimal government bureaucracy or paternalism. Why not institute a carbon tax and use part of the revenue to send checks to poor people? And while I’m dreaming, why not get rid of America’s monstrous, Rube Goldberg healthcare system and replace it with single-payer?

All these things would benefit all workers, including coal workers, giving them more freedom to seek education or start businesses or move to where there are better jobs. There are so many ways that workers get screwed in America. Shouldn’t we try to help them all?

Anyway, this is all pretty cursory, I realize. I hope it can prompt some discussion. Tell me in comments what you would like to see done for America’s suffering coal mining communities.