Our planet is heating up. The cause is in some ways simple: Humans add a lot of carbon dioxide to the air every year, about 40 billion tons of it. CO2 is a greenhouse gas: It lets sunlight through to heat the ground, but the infrared light the ground emits gets absorbed, and cannot escape to space. That warms us up, slowly but inevitably. By every measure available to us, we see the effects of this increased heat.

But there’s hope, at least a hint of it. A new study has some hopeful news about global warming: The global emission of carbon dioxide slowed substantially in 2014, and is projected to drop a little bit in 2015. This comes after over a decade of quite sharp growth in emission.

Better yet: This happened while the global economy underwent “robust growth,” and it happened in part due to switching to renewables (solar and wind power) as well as a drop in coal use.

Globally, over the past 15 years, we’ve been dumping roughly an extra billion tons of CO2 into the atmosphere every year, jumping from 25 billion tons per year to over 37. But the rate has slowed in the past couple of years; in 2014 the growth slowed dramatically, and according to the new research the rate is projected to drop in 2015 by roughly 0.6 percent, from 35.9 billion tons to 35.7.* 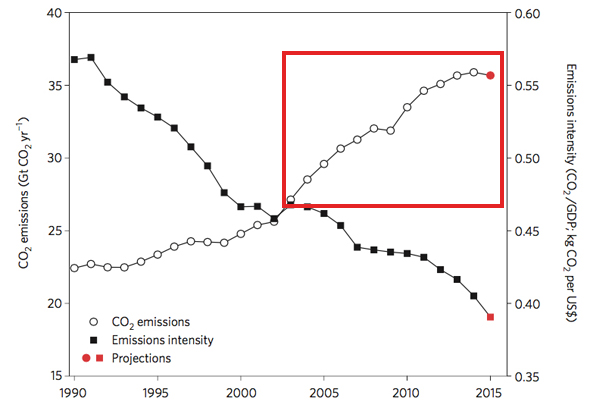 The key player in this is China. They lowered their coal use, and increased their reliance on renewables substantially. This dropped their emission CO2 by 4 percent, and it may actually indicate a trend:

Because 58 percent of the increase in China’s primary energy consumption from 2013 to 2014 came from non-fossil-fuel sources (hydro, nuclear, and other renewables), compared with 24 percent for increased natural gas and 17 percent for oil, China’s stabilization of, and even reduction in, coal use might be sustainable longer term.

In the case of China, their economy didn’t grow much during this time, which had something to do with this. But that’s not the case for the rest of the planet, where increased use of renewables didn’t appear to hurt the economy at all.

This is due to price installation incentives and a couple of breakthroughs in technology that allowed the price of manufacturing both wind and solar power systems to drop. In many places, they’re on parity with coal power on a dollar per kilowatt basis.

And this all happened as the global economy strengthened. As the researchers put it: “What makes the 2014 and 2015 data so unusual is the pairing of relatively stable CO2 emissions with continued global economic expansion.”

This is great news, but have a care here. Hitting a peak isn’t good, just better. Think of it this way: You feel sick, and take your temperature. Over the course of a day it keeps going up, hitting a peak of, say, 103 degrees. If it drops to 102.5 that doesn’t mean you can go out and play racquetball; it just means you’re on the mend. You can breathe a sigh of relief once it’s back down to normal.

We’re nowhere near normal, at least not as measured by average CO2 emissions, CO2 levels, and temperatures over the past few decades. As long as we produce any CO2, the level in the atmosphere will go up — CO2 is a long-lived molecule compared to other greenhouse gases — and temperatures will go with it. The goal is to become CO2 neutral, so that we no longer put any of it in the air, and the levels can stabilize, or even drop. 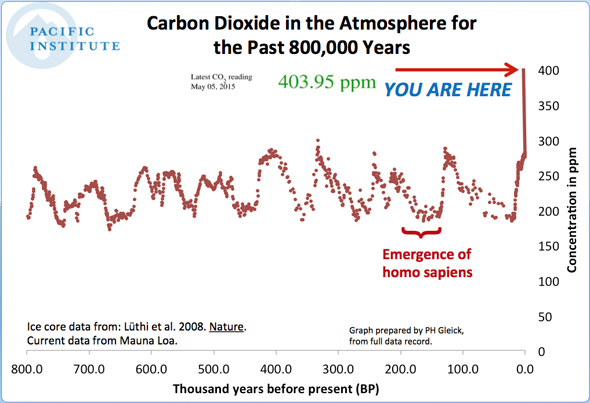 As it stands, we’re still dumping it into the air faster than any time not just in recorded history, but going back hundreds of thousands of years. It’s not just the amount that’s hurting us, it’s how fast it’s going up. We live in a delicately balanced system, and this huge rate of increase is throwing it grossly out of whack. The Earth’s atmosphere and biosphere are being kicked, hard, and don’t have time to react properly. This is why global warming is so dangerous: It’s changing our climate more rapidly than the Earth — and the life on it — can compensate. At the same time, we rely critically on the environment to feed 7 billion of us … and that number is going up all the time as well. Droughts in one place, torrential rains in another, rising sea levels, and extreme weather all around are like setting off an explosive in a China shop.

So again, this slowdown in emission is good news.

It also puts the lie to the standard doom and gloom Republican claim that moving away from coal and using more renewables will hurt our economy. I’ve always thought that investing in new technologies was an excellent way to help the economy — it spurs innovation and creates new jobs. That’s what we’re seeing here with investing in wind and solar, with the added benefit of reducing global warming.

So are we nearing peak CO2 emission? Maybe. A few years isn’t necessarily a trend, of course. As the researchers say in their report, “Time will tell whether this surprising interruption in emissions growth is transitory or a first step towards emissions stabilization.”

A lot of this depends on China, and also India, which has well over a billion people, with hundreds of millions off the electric grid. They need to increase their renewable use as well as install a robust power grid to deliver it. But I like what I see here: Switching to renewables, if done correctly, helps everybody. We don’t need to increase dirty energy generation at all. It’s time to turn away from it even more.

* The numbers quoted in the new study differ a bit from the 40 billion I’ve been using for a few months, which is from a paper published in 2013. This is because the new report looks at fossil fuel burning and cement manufacturing, the two largest sources of CO2. It doesn’t include biomass burning, deforestation, and other smaller sources, which together add an extra 3 GT/year. It looks like the total number including all factors is about 39 GT/year currently, but — hopefully — dropping. My thanks to the Orbiting Carbon Observatory Science Team Leader David Crisp for straightening that out to me.