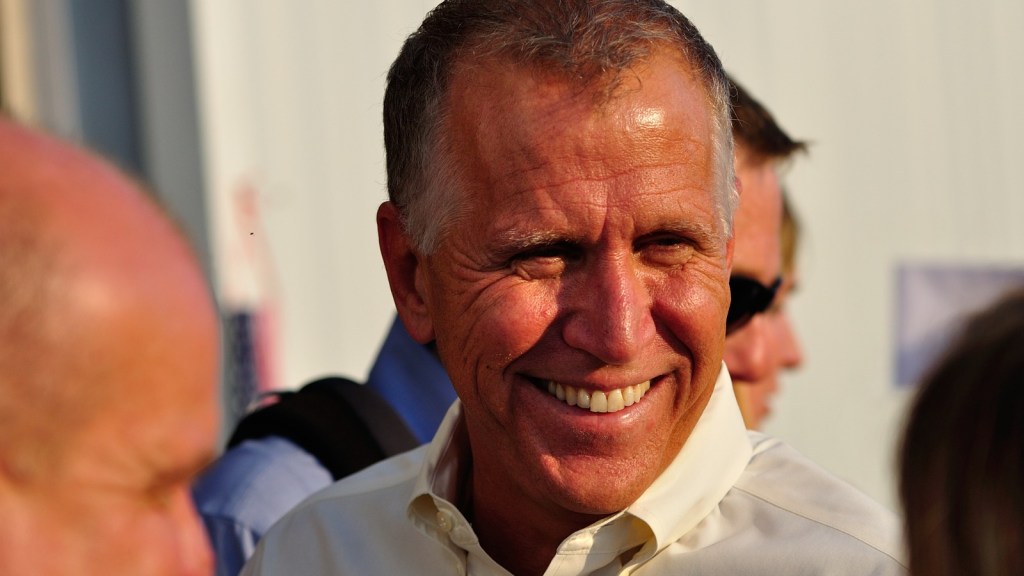 North Carolina Senate candidate Thom Tillis is making an unusual argument — for a Republican. In recent weeks, he’s accused his Democratic opponent, Sen. Kay Hagan, of sabotaging critical environmental regulations because of her “cozy relationship” with a powerful energy company. At the same time, Tillis has trumpeted his own role in fighting for what he claims are tough new rules that will clean up the coal industry.

But North Carolina environmentalists say he’s full of it. “That’s pretty bold, as a line of attack, considering the environmental record he’s got,” says DJ Gerken, an attorney with the Southern Environmental Law Center.

The back-and-forth is the latest skirmish in the political war over one of the worst environmental disasters in the state’s history. In February, a toxic waste dump at one of Duke Energy’s coal-fired power plants ruptured and belched up to 39,000 tons of coal ash into the Dan River. Thousands of people lost access to drinking water, and the river was polluted with toxins like lead and arsenic. In response to the disaster, Tillis — who leads the state’s GOP-controlled House of Representatives — is pushing legislation that ostensibly tightens regulation of Duke’s remaining coal-ash pits. But critics say the bill as written would actually leave North Carolina even more vulnerable to future spills than it already is.

Tillis and Hagan have both taken large donations from Duke Energy — an energy giant and the largest utility company in the state — and as the election nears, they are blasting each other’s environmental records. But North Carolina green groups are laser-focused on Tillis. They rush to point out that, under his leadership, Republicans passed a budget that kneecapped the state’s water quality regulators. Moves like that have earned him a League of Conservation Voters rating of 26 percent. (Hagan has a lifetime rating of 84 percent.) Public Policy Polling, a liberal firm, recently released a poll showing that North Carolina voters overwhelmingly disapprove of Tillis’ handling of the new coal-ash regulations. And earlier this month, the North Carolina League of Conservation Voters unleashed a $1 million battery of negative ads accusing Tillis of doing nothing to prevent the next Dan River disaster.

And so Tillis pushed back: “After 80 years of inaction in the General Assembly,” his campaign declared in a recent press release, “Tillis took leadership to cleanup the coal-ash spills and help prevent future accidents.”

In fact, environmentalists view the coal-ash bill supported by Tillis as a step backwards in the regulation of toxic coal waste. On Friday, the SELC warned that the legislation “inexplicably attempts to weaken our state’s existing groundwater protection laws in favor of Duke Energy.”

“Where do you want me to start?” asked Mary Maclean Asbill, an SELC lobbyist. “There are a million things wrong with this bill.”

For example, she says, Duke Energy maintains 33 coal-ash dumps at 14 coal-fired power plants across the state. Duke’s own records show that many of them have leaked contaminants such as arsenic, lead, and selenium. But the bill as written would only require Duke to close pits at four of its power plants — pits that Duke has already offered to clean up. At some of the remaining sites, Duke could simply cover the pits instead of emptying them, which means they could still pose a threat to waterways. “We always wanted a bill that requires full and complete closure of these sites and moves the coal ash to dry, lined landfills,” Asbill says.

Environmental groups also argue that the House bill, backed by Tillis, is significantly weaker than an earlier version passed by the Senate. House Republicans blew a hole through deadlines that the Senate bill established for cleaning up the coal-ash ponds, making it easier for energy companies to request additional time to comply with new rules. “The House bill basically says, ‘Meet this deadline, except if it’s going to take longer, it’s going to be hard, or it’s going to cost more money,'” says Asbill. Even Senate Republicans oppose the change. (The bill is currently in a conference committee, where negotiators are working to reconcile the differences between the two versions.)

Tillis’ campaign didn’t respond to Mother Jones’ questions about the coal-ash bill or the rest of his record. But his team has been working hard to portray Hagan as the real enemy of the environment.

The Tillis campaign charges that as a state senator, Hagan helped set the table for the Dan River disaster by voting to exempt Duke from key regulations. Tillis points to two specific bills: a 2006 moratorium on new landfills in the state, and a 2007 set of new landfill rules. The bills, which were aimed at blocking six “mega-landfills” slated for construction along North Carolina’s fragile coast, did indeed contain clauses saying that they didn’t apply to coal waste. It’s not clear why those exemptions were included, but there’s no evidence that Hagan was responsible for them. At the time, the Sierra Club hailed the 2007 bill — which passed with broad bipartisan support — as “the most important overhaul of the state’s solid waste laws in two decades” and a “major environmental victory.”

Hagan’s campaign is referring to a subtle change in state law — reportedly made at the urging of Duke lobbyists — that helped protect Duke from an SELC lawsuit that sought to force the company to clean up coal-ash ponds. (GOP Rep. Ruth Samuelson, the vice chair of the environment committee, says that lawmakers never intended to protect Duke from ongoing lawsuits.)

Despite their dislike of Tillis, some progressive say that Hagan’s environmental record isn’t exactly inspiring, either. Tills’ record is pretty dismal, argues Rob Schofield, the policy director of the liberal group NC Policy Watch, while Hagan’s record is nothing special. As a state legislator, he says, “It didn’t seem to be that she had any special affinity for environmental issues.”

The reality, says Schofield, is that Duke, which is headquartered in North Carolina and has thousands of employees in the state, enjoys favorable relationships with both parties. “It’s part of the reason why the coal-ash issue [is] one that everybody’s been very neglectful of,” Schofield says. “The power companies here really are equal opportunity givers.”

Indeed, the Duke Energy political action committee has donated $10,000 to Hagan and $12,000 to Tillis since 2012, according to a Duke spokesperson. (FEC records show Tillis has taken almost $30,000 from coal companies, all told.) The Duke spokesperson declined to comment on the new coal-ash regulations or the Senate race itself. He did add, “Our intent is to have a productive working relationship with all members of Congress and the legislatures where we operate.”