Time to march for the climate, then "Shmoney dance to the polls" 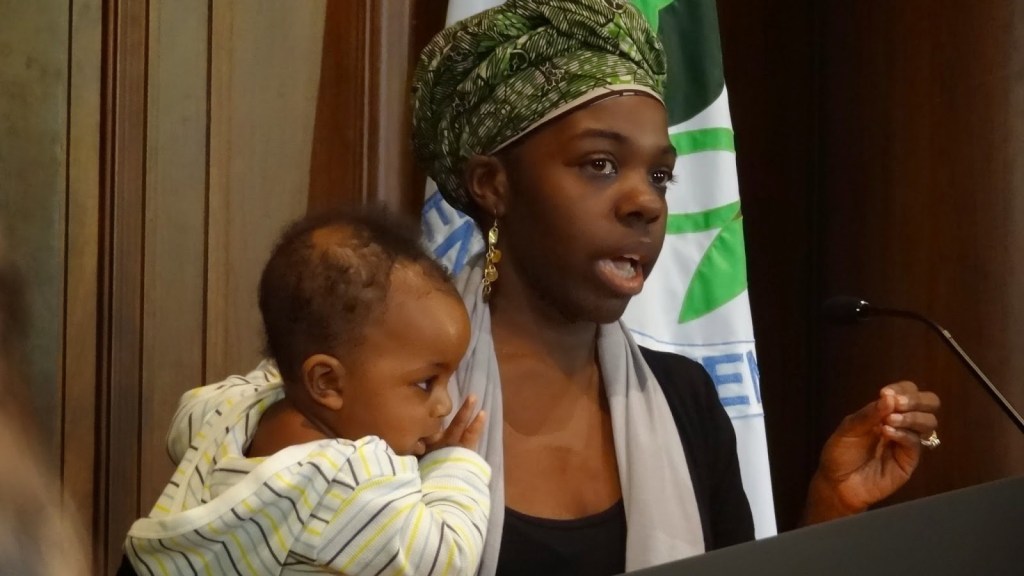 Time to march for the climate, then “Shmoney dance to the polls”

If we’re talking marches, especially those inspired by the civil rights demonstrations of the 1960s, we gotta talk about college students, and black college students in particular. They are the ones that helped set off the lunch counter sit-ins and Freedom Rides, and they continue leading demonstrations for voting rights today.

And they’ll be on deck for the People’s Climate March, determined not to be erased from the picture, as has too often been the case in green endeavors.

A caravan of black students and professors are joining with social justice advocates and faith leaders across the South for bus rides to the climate march, which goes down this Sunday in New York City. The coalition’s organizers have dubbed it the Southern Initiative on Climate Change. It’s an extension of the HBCU (historically black colleges and universities) Environmental Justice Consortium, spearheaded in part by environmental justice maven Beverly Wright of New Orleans.

Helping organize the D.C.-Baltimore legs of those climate bus rides is Kari Fulton, interim director of the Environmental Justice and Climate Change Initiative, a well-traveled climate activist who’s participated in a number of United Nations climate summits around the globe. She’s recognized widely as a youth leader on this front, a fixture at youth-focused conferences like Power Shift and other Climate Justice Alliance events.

Earlier this year, she spoke at the EPA’s Rachel Carson Green Room before a room full of long-entrenched civil rights activists, like Congressman John Lewis, and high-ranking environmental officials like EPA  Chief Gina McCarthy. They were all gathered that day to commemorate the 20th anniversary of the executive order on environmental justice. Fulton, easily one of the youngest in the room, delivered a moving speech that day about supporting grassroots green causes while holding her then newborn-son on her hip the entire time.

Fulton possesses the “ride or die” spirit that justice activist sisters Dorie and Joyce Ladner had 50 years ago when they gathered people to get on the bus in Mississippi. As Fulton often reminds people, the struggle for climate justice is intergenerational.

I sat down with Fulton a few days before she began loading up the buses to discuss the significance of the upcoming march, what it means for the relationship between environmental justice groups and the larger environmental groups, and, most importantly, how she plans to keep momentum from the march going. Read below to get a whiff of that “ride or die” spirit:

Q. Can you breakdown the bottomline for this march, especially for those not entrenched in climate activism?

A. The real reason we’re having this march is so that the rest of the world knows that there is a contingency in the U.S. that actually gives a damn about our planet. Because of how we’ve acted in these climate negotiations [in the past], the rest of the world believes that the U.S. is not ready to really make moves on climate for the global community, and that everybody in the U.S. is like how our government is, when that’s not the case. This summit is the first of its kind in the U.S. That’s why this is so important: to make sure the global world sees and knows that there is a large contingency of people here in the U.S. who care.

Q. People I’ve spoken with recently have said that a demonstration like this, bringing grassroots groups together with the mainstream green groups, couldn’t have happened 5 or ten years ago.

A. We’re creating something for the history books, not just because we’re having this big march, but because we have all these different groups from all these different backgrounds coming together to produce this epic moment, putting aside their differences and ulterior motives. There’s not even a direct ask. Everybody comes with their own ask to the table. The main thing we’re all saying, though, is that our house is messed up and we need to clean it up, brick by brick. And this is the big house — not just the black people’s house, or the Latino house, or first nation house, but the big house, three blocks down from the sun.

Q. So what happens the day after the People’s Climate March for you? What’s next?

A. The day after the People’s Climate March, there’s the People’s Climate Summit, which is being organized by the Climate Justice Alliance, of which the Environmental Climate Change Initiative is a part. I also hope people are advocating for matching funding. The funding that was put into this march — match that so you can have continued organizing on the ground, because that’s going to be the biggest thing. A lot of people working for these organizations were hired just on a temporary basis for this march. It will be a challenge for the funding world to make sure they can match those funds to keep people on, while they’re engaged. Lets not let that fire die.

Q. So how do you get the younger generation to the polls on climate, especially when issues like Ferguson are what’s on their minds?

A. I don’t look at it as a competition, like, “Oh, you are talking about police brutality, but I want to talk about climate change.” No, it’s the same thing, because at the end of the day, if your police force is terrible when and where there’s no natural disaster, what are they going to be like when there is a natural disaster, and they’re treating you all like looters when you’re really just trying to survive?

So taking it back to voting, all of these issues are local issues. When you look at what the Hip Hop Caucus is doing, with some extremely strong voter registration work, I think those are the types of organizations that we need. Like Black Youth Project and Dream Defenders — those are the groups that we have to bring to the table so that they can see that bigger picture. That can help a lot of things as far as getting people more engaged in voting, looking at progressive slates, and looking at, not just police brutality, but the whole gambit. Basically, we gotta Shmoney dance all the way to the polls.

Q. What steps can community-based organizations take to leverage the attention and resources from the march?

A. It’s going to be building the relationships with the larger [environmental] groups, especially if you didn’t have those relationships before, and making sure those relationships are equalized. I also see it as a great opportunity for groups on the ground like UPROSE and the New Jersey Environmental Justice Alliance and the New York City Environmental Justice Alliance. I want to make sure they get their names out there. It’s important for all small groups with banners, that they put their names on it. Us smaller groups are not always as blatant about our branding, but it’s important to get our name out there, to make sure people remember who we are after this, the biggest march on climate in history.

Q. What does a just and equal partnership look like, especially in the climate fight?

A. It’s like any relationship — the key is communication, which is key prior to any contracts being signed, so everyone can truly say what they want or don’t want out of the partnership. But sometimes what happens is, someone ends up with more than the other. Because of how funding works, there are situations where we [smaller groups] have to reach out to [larger ones], because … they have access to the kind of power that we don’t always have.

That doesn’t mean they’re better than us. It just means that at this point, because of certain dynamics, they have that access. In a partnership, we’re supposed to be making each other better. We help make that happen by helping each other reach our final goals of changing the world, making it a better place to live, having a healthier planet, a place where people can live, play, and worship happily. If we get back to those common goals and work towards that, that’s what partnership is about.