Toto, our wind turbines are safe for another year! 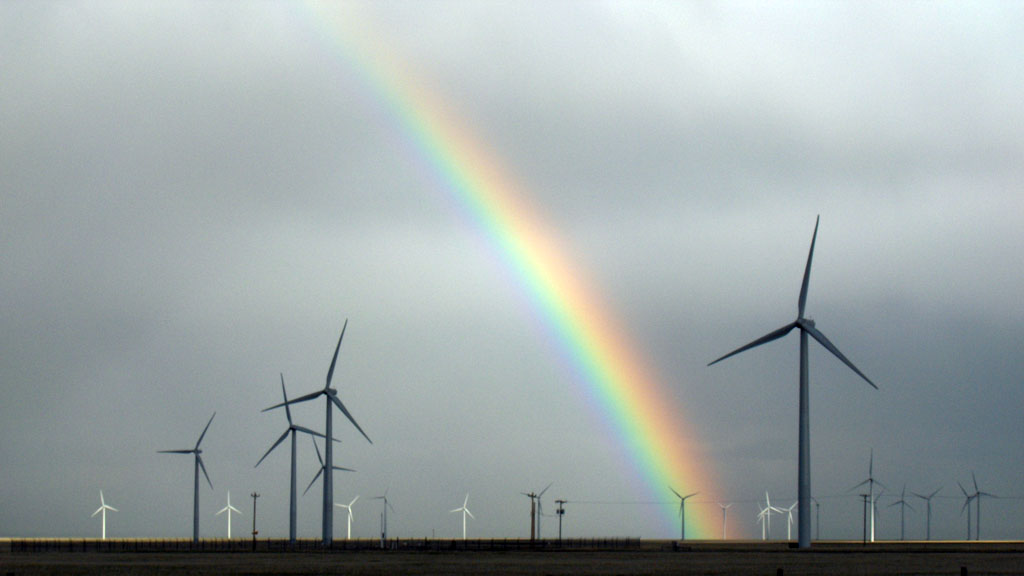 Toto, our wind turbines are safe for another year!

As we all know from that fine documentary film, The Wizard of Oz, Kansas has a lot of wind. Even when it isn’t sweeping away sullen little farmgirls into concussion-induced Technicolor allegory, it’s got enough windpower to put it smack dab in the area known as “The Saudi Arabia of Wind” — that lavender trough of higher wind speed that runs through the middle of the U.S. Department of Energy’s utility-scale wind resource maps.

For this reason, Kansas has become one of the test kitchens experimenting with shifting away from digging stuff out of the ground and burning it, and towards making that wind do something useful for once. In 2007, after a tornado wiped out the farm town of Greensburg, the city was rebuilt, with solar panels and wind turbines within the city proper and a wind farm five miles out of town. The whole setup produces enough power for the entire city and a few neighboring municipalities as well. In 2009, Kansas passed a renewable energy portfolio standard (RPS), which mandates that local utilities get 10 percent of their power generation capacity from renewables from 2011 to 2015, 15 percent from 2016 to 2019, and 20 percent by 2020.

The RPS was passed with bipartisan support as part of a compromise bill — approved by its opponents in exchange for the expansion of coal-fired power plant in Holcomb, Kan. But even with bipartisan support, the standard caught the attention of the American Legislative Exchange Council (ALEC) — a conservative think tank with close ties to the oil and gas industry that is opposed to just about everything to do with alternative energy.

ALEC seems to have a particular vendetta against RPS regulations across the country (about 30 states have them) and in 2012, ALEC wrote up a model RPS repeal bill that began to show up in state legislatures across the country, including Kansas. The coal plant expansion hasn’t happened yet; it’s still mired in an Environmental Impact Review that was mandated by a federal judge. Meanwhile, Kansas has been going gangbusters on the wind front and is already ahead of schedule on its RPS goals.

All the more reason to repeal it, according to state Sen. Rob Olson (R-Olathe) during an attempt to kill the standards in 2013. The state was relying too much on wind already. “It’s a fact,” he told the Topeka Capital Journal, “Wind doesn’t blow all the time.”

The repeal was unsuccessful, but the effort reappeared March 20, when the Kansas Senate Utilities Committee voted to repeal the RPS, again.

And once again, the state House shot down the repeal effort. “It certainly got windy in here,” Rep. Randy Garber (R-Sabetha) was heard to say.

And so Kansas has another year of wind power standards, which — the hope goes — will continue to lure wind entrepreneurs to Kansas as a proving ground for their ideas.

Will wind’s opponents try to repeal the RPS again next year? Probably. Will they lose? There’s a good chance they will. Ardor for wind power does not exactly break down along party — or even environmental — lines. The governor of Kansas, Sam Brownback, is a Republican who happens to be a big supporter of both wind power and drilling in the Alaskan National Wildlife Refuge (and, actually, anything else that you might be able to pull oil out of).

If anything, the story of Kansas and wind power is a story of how environmental goals, once accomplished, need to be affirmed over and over again. Which, at least for now, they have been. Little Dorothy Gale has her minimum wind power standards for another year.