What can John Kerry accomplish with his climate talk? 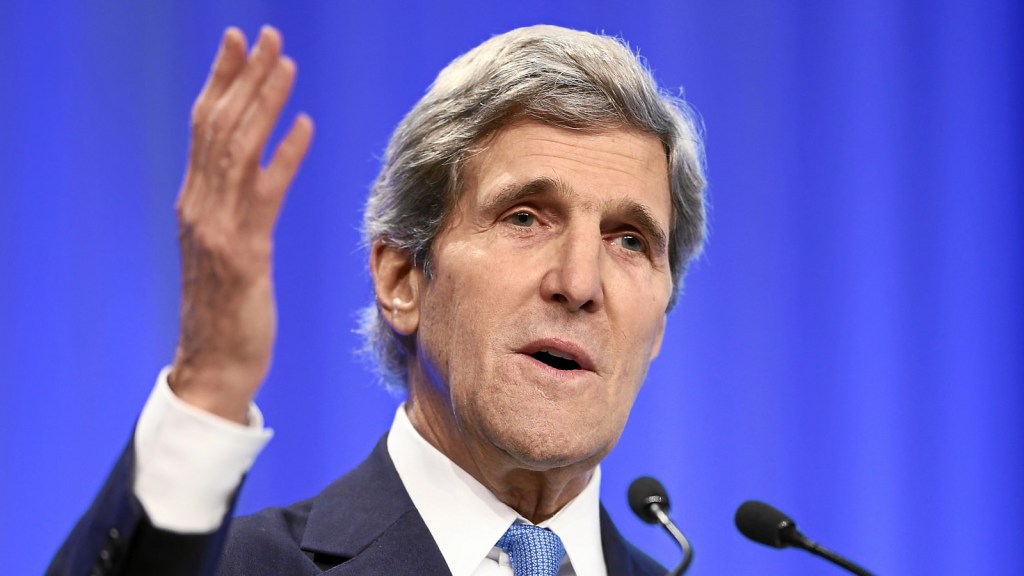 What can John Kerry accomplish with his climate talk?

It was an exciting moment for environmentalists Sunday when Secretary of State John Kerry gave a speech in Indonesia emphasizing the severity of the potential consequences of climate disruption. Kerry — who has been a climate policy leader since he was in the Senate — equated the threat of catastrophic climate change to that of nuclear weapons proliferation.

The latter has been the single greatest fear of American presidents since the dawn of the atomic era. It led us into war in Iraq, which demonstrated the foolishness of combating an international problem unilaterally. And now Kerry is applying that lesson to climate change,  arguing that the only effective course of action is multilateral cooperation. “Every nation on Earth has a responsibility to do its part if we have any hope of leaving our future generations the safe and healthy planet that they deserve,” said Kerry. He went on to imply that developing countries should agree to limit their emissions at U.N. climate negotiations in Paris next year.

From the Obama administration’s perspective, Kerry is sending an important signal: That they view global warming as a threat to human life and international stability, and combating it will be an organizing principle of U.S. foreign policy. This is certainly a break with Obama’s predecessor, and even with Obama’s first term, which was more focused on narrowly tailored actions to address immediate humanitarian crises and on decapitating Al Qaeda.

Critics, like The New York Times’ Andrew Revkin, worry that it is hypocritical — and therefore likely to backfire — for Kerry to tell residents of Indonesia, a poor country with vastly lower emissions than ours, that we all must sacrifice together. Some experts are more sanguine. “The strength of the speech, in my view, is that it tries to set aside the question of historical responsibility and focus, instead, on the common need going forward for all nations (notably the big emitters) to cooperate,” writes David G. Victor of UC-San Diego in an email to Revkin. “I doubt that effort will be fully successful because many developing countries make hay about historical responsibility and use it as a cover for demands of compensation and for inaction. But at least the US is making an articulate, serious and strategic effort to move the debate into a new and more productive space. And at least Kerry is doing what few others have tried seriously, which is the spadework with the big emitters to create a coalition of the willing.”

But will such a coalition come together? If it does, it won’t be because of Kerry’s speech, but rather because circumstances — such as the domestic political situations in other countries — allow it.

The power of the bully pulpit is vastly overestimated in the American public’s imagination. Great political speeches are remembered as watershed moments, but only in retrospect. They come to embody an already ongoing transition, or a shift in policy that they accompanied. As Ezra Klein explained in a 2012 essay in The New Yorker, even presidents are generally unable to persuade anyone who wasn’t on their side already.

Is there any reason to think speeches by a secretary of state are different? No, say international relations experts. “The bully pulpit generally is not effective,” says Aaron David Miller, a vice president at the Woodrow Wilson International Center for Scholars who spent two decades advising secretaries of state in both parties. “It raises expectations without means of meeting them, and into the gap goes American credibility.”

Kerry pleaded with developing countries to forgo the myopic appeal of dirty energy, saying, “I urge governments to measure the full cost to that coal and that oil, measure the impacts of what will happen as we go down the road.”

But why would we expect the government of, say, India or Indonesia to heed him? “No matter how big and powerful the U.S. is, we don’t rule the world, and we cannot simply order people about,” says Miller. “Talking big without out having something to back it up is almost always a prescription for the inability to accomplish anything.”

It’s especially true in the case of Kerry and climate change, in which he does not even control domestic American policy. As Grist’s John Upton points out, the U.S. should probably lead by example on greenhouse gas emissions before lecturing poor countries on what they should do. But Kerry controls neither the relevant federal agencies needed to curb oil and gas drilling, nor the Congress that would have to revoke fossil fuel subsidies or put an economy-wide price on carbon.

“Secretary of state speeches are influential because they announce some action they are going to pursue,” says I. M. (Mac) Destler, director of the University of Maryland’s program on International Security and Economic Policy, pointing to George C. Marshall’s 1947 speech announcing the European aid program as an example. “It’s often the action, not the speech.”

The real question, then, will be whether the U.S. can work the levers of power in multilateral negotiations to build international agreements and enforcement mechanisms capable of limiting carbon emissions. There are plenty of precedents, such as the nuclear non-proliferation treaty. Kerry’s speech alone won’t make it happen, but if the policy work over the next few years does, perhaps we will look back and remember his speech as a defining moment.