The rumblings are starting: There’s a big climate report on the way. But wait — you’ve heard this one before, right? The Intergovernmental Panel on Climate Change — its report already came out recently, didn’t it? More than once, come to think of it?

Well, yes, but there is still one more IPCC report coming out this Sunday, Nov. 2. It’s related to the others, but is also sort of different. For starters, a leaked draft uses stronger words to describe the climate threat we face if we don’t take strong action, words like “severe, pervasive and irreversible,” according to the AP.

The IPCC’s latest big survey of climate research has been unveiled in installments over the past 13 months, and what comes out on Sunday is the final summary, called a “synthesis report.” Its authors are meeting in Copenhagen this week to wrangle over the final wording and ultimately put the finishing touches on it.

The panel intends for this assessment report to guide international negotiators as they work, in the run-up to the big Paris climate summit in December 2015, to hammer out an agreement to reduce global greenhouse gas emissions. The U.N. hopes nations will find a way to squeeze through the ever-shrinking window of opportunity and cut a deal to keep the planet from exceeding 2 degrees Celsius of warming — the goal scientists have set to avoid the worst impacts of climate change — before we blow right past that target. 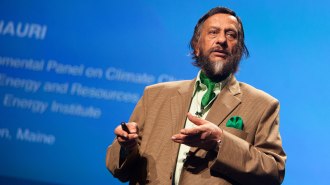 Opening the IPCC meeting on Monday, Rajendra Pachauri, the group’s chair, acknowledged that stuff doesn’t look super great right now. But he called on these U.N. negotiators to resist despair. The AP:

“May I humbly suggest that policymakers avoid being overcome by the seeming hopelessness of addressing climate change,” Pachauri said. “Tremendous strides are being made in alternative sources of clean energy. There is much we can do to use energy more efficiently. Reducing and ultimately eliminating deforestation provides additional avenues for action.”

Representatives of participating nations have been telling the IPCC what changes they’d like to see in the summary report before it becomes final. One leaked draft had more than 2,000 suggestions for changes. From the British news website Responding to Climate Change (RTCC), which got its hands on the draft:

The UK wants the Intergovernmental Panel on Climate Change (IPCC) study to focus more [on] the “risks of delaying action” as well as the “co-benefits of action”.

US comments say the study should stress how richer countries could be affected by future extreme weather events. “There are very few references to the vulnerability of wealthier countries to climate change,” they write.

The US also says the final IPCC synthesis report, which pulls together three 1,000+ page studies released in the past 12 months, needs to be more accessible to readers without deep technical knowledge of climate issues.

“This document should be prepared so as to be effective for the people who will only read the gray boxes. This report is a story, of what happens if we don’t act, and what can happen if we do … it should be an effective story.”

“I have zoomed 150% in the pdf and have a huge monitor. The [Figure SPM 4] has a low resolution which makes it hard to read on paper,” a Danish official writes.

You can’t get much past those Danes.

The IPCC, a group affiliated with the U.N., has been putting together reports since 1988. Thousands of climate scientists volunteer their time to summarize the latest and best research out there on climate change. The group put out its first assessment report in 1990, and then three more in 1995, 2001, and 2007. (See John Upton’s excellent “WTF is the IPCC?” for more background.)

The panel has been working for over three years on this latest report (they do take their time). The gargantuan assessment report (sometimes referred to by wonks as AR5, for “assessment report 5”) is made up of three working-group reports, which are each quite long, and then the big summary that’s due out on Sunday.

The first part, you may recall, came out last September. From the first of the three working groups, it reiterated that humans are the main driver of climate change, at least since 1950, and highlighted research indicating that oceans have been absorbing more heat since the 1990s than in previous decades. It put the target for total CO2 we could release into the atmosphere at 1 trillion tons — and we’ve already released more than half of that.

The second working group released its report in March of this year. It looked at vulnerable communities and adaptation, and found the world to be frighteningly underprepared. And the third working group’s report came out in April. It looked at mitigation — wonk-speak for cutting emissions — and methods of doing so justly through global cooperation.

There’s one more annual, high-level U.N. negotiating session on climate before the big 2015 conference, and it convenes in December in Lima, Peru. “The [IPCC] report will be a guide for us,” Peruvian Environment Minister Manuel Pulgar-Vidal told Reuters. At the Lima meeting, negotiators hope to lay the groundwork for a plan that will be put into action the following year in Paris. Many see that conference as the last chance to work out a deal that will keep the climate from spinning too far out of control.