On Wednesday, scientists from the National Oceanic and Atmospheric Administration and National Aeronautics and Space Administration released their combined study on 2019 weather trends around the world. The main takeaway was stark: 2019 was the second-warmest year on record, and the trend from Alaska to Antarctica has been one of steady warming. According to data from the two government agencies — collected independently, then presented in tandem — the last five years were the hottest in recent human history, with 2016 barely beating 2019 for first place.

The respective organizations covered much of the same ground, but both made some unique additions to the joint report. NASA, for example, contributed a global temperature uncertainty analysis — tracking margin of error — while NOAA added specific coverage of domestic heat and rain conditions for the year.

“Notwithstanding the potential for major disruptive events — a volcano, some sort of massive social action — if setting those aside,” Deke Arndt, chief of climate monitoring at NOAA, told reporters, “the chances are we’ll continue to climb at about the rate we’ve been climbing.” Though the report contained no predictions beyond that one, their data illustrates that even though 2019 may have been an anomaly on the grand scale, if the scope were narrowed to the last decade, it was yet another example of how the planet is moving towards a hotter future.

Here are some of the most striking charts from the report: 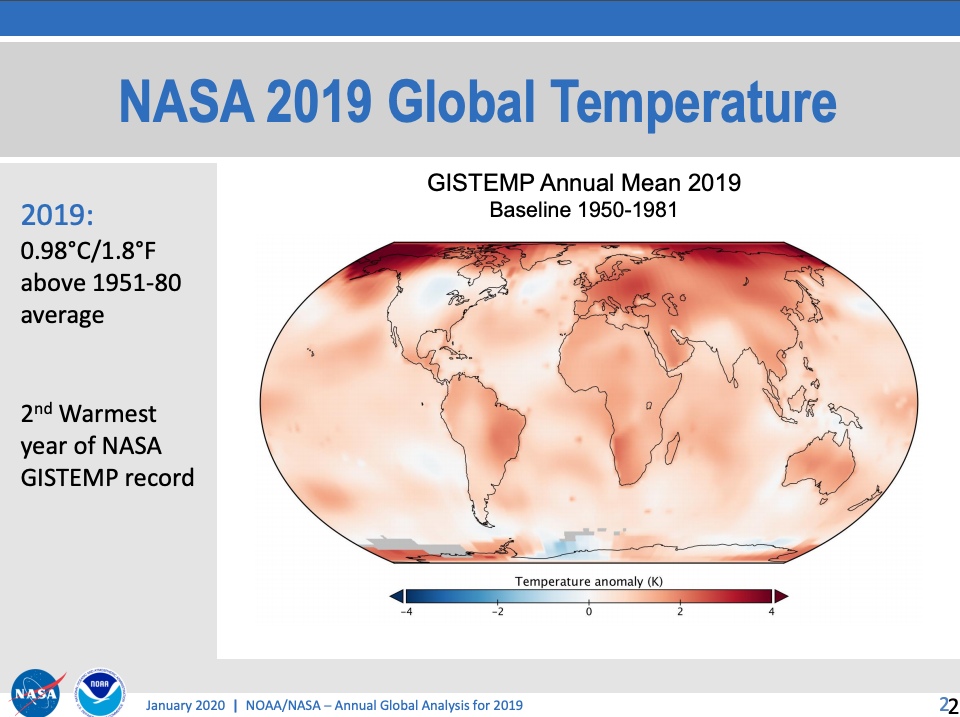 According to data collected by NASA, and corroborated by NOAA, 2019 was the second-warmest year ever recorded. That’s 1.8 degrees Fahrenheit warmer than the average temperature of the Earth between 1951 and 1980. 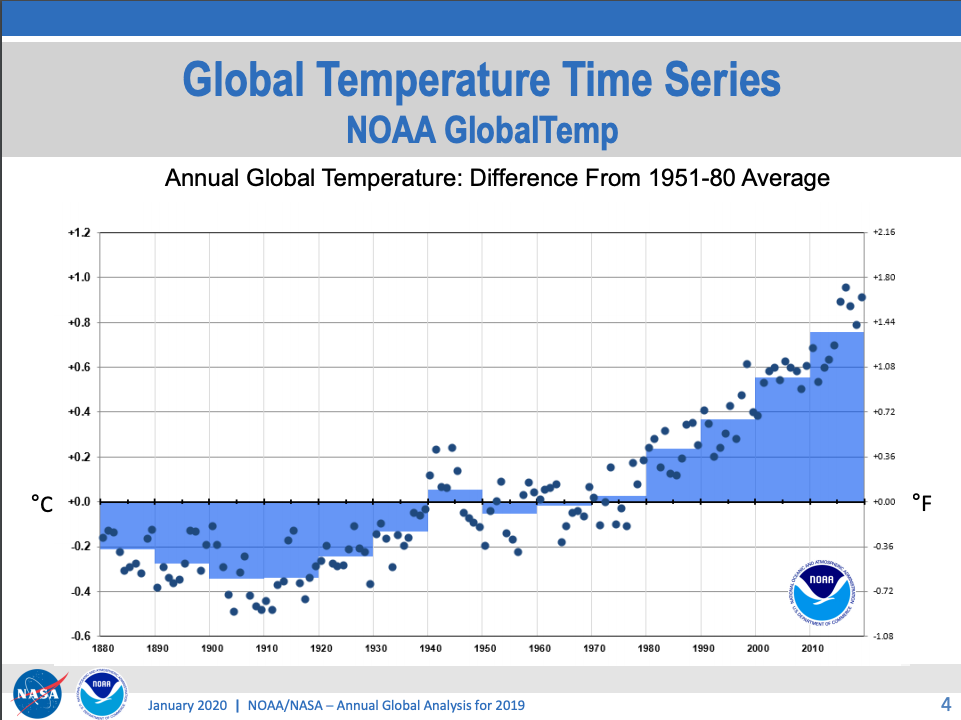 Despite being collected independently of each other, there is remarkable consistency between the findings. On a given year, it’s normal for there to be some discrepancy, but Arndt says the data from 2019 were “in complete agreement,” showing a consistent increase in global average temperature since at least 1980. By presenting that data side by side, he notes, the findings of both are reinforced. “We’re measuring the same planet, and we do have slightly different methods,” he said. “It actually helps that we have slightly different ways — in a checks and balances way — to make sure our methods are solid.” 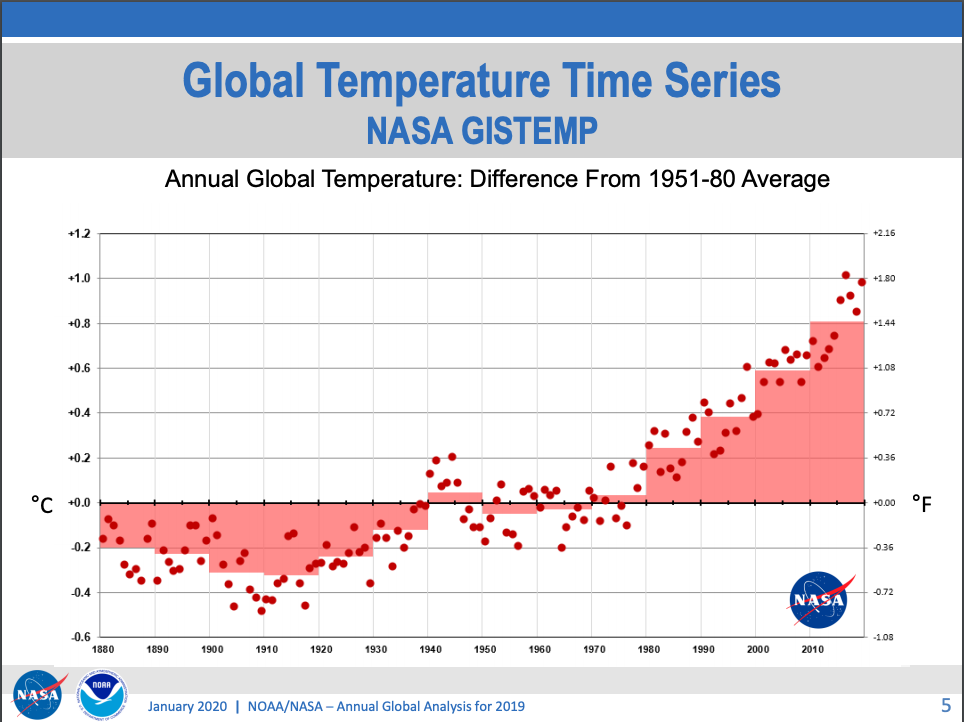 According to Gavin Schmidt, the director of NASA Goddard Institute for Space Studies, the Arctic sea ice levels oscillate between March and September, when seasonal ice melting and expansion take place. In recent decades, the measurements of sea ice taken at those times have dramatically fallen, uncovering sections of Arctic ice that haven’t touched the open air on the earth’s surface in 50,000 years. 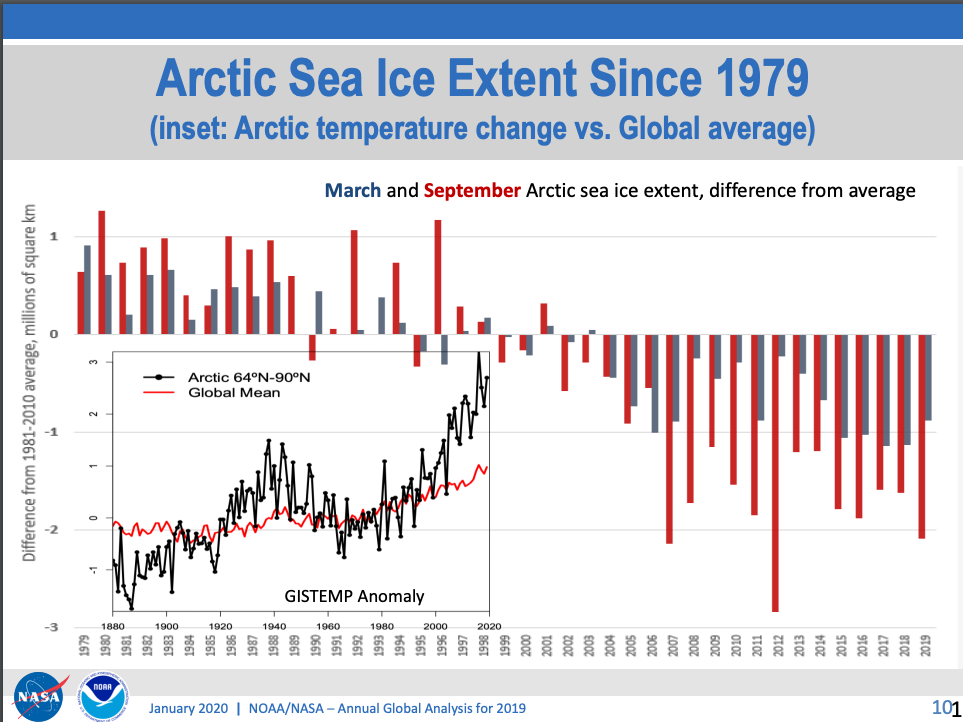 Across the United States, mean temperatures in 2019 also were above average. The differences were particularly dramatic in the American South, where large swathes of Georgia, Virginia, and North Carolina saw record heat. 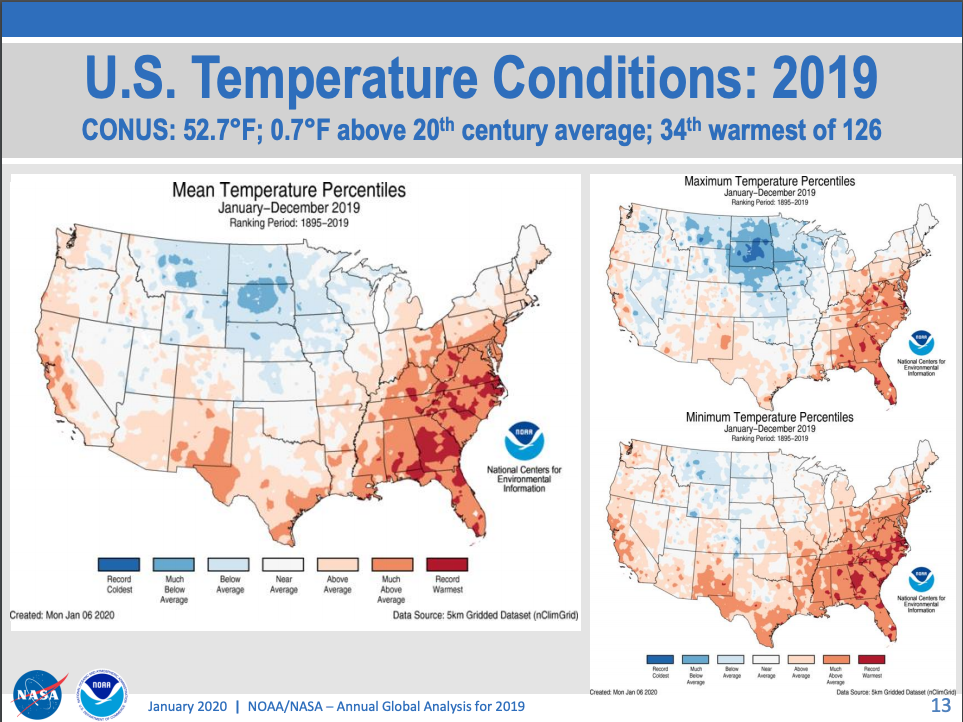 Yet it was Alaska that saw the most dramatic deviation from the norm. Average temperatures in the state in 2019 were 32.2 degrees Fahrenheit, more than 6 degrees higher than the cumulative average from 1925 to 2000. 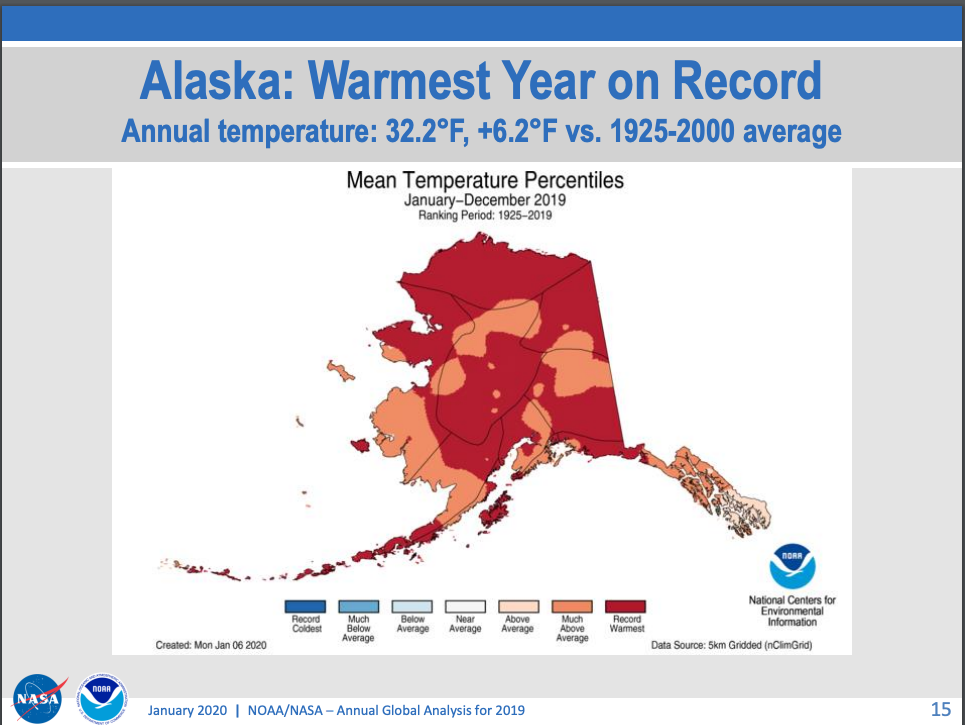 These findings are jarring and come during a long campaign of climate change erasure and denialism from the Trump administration. Though the organizations have been pulled onto the political chessboard in the past by President Donald Trump, both scientists were clear about the fundamental cause of the warming temperatures: Certainty that the trend is the result of human behavior is “at near 100 percent,” says Schmidt. “All the trends are anthropogenic at this point.”