Amazon told its workers not to criticize its climate policies. They didn't listen. 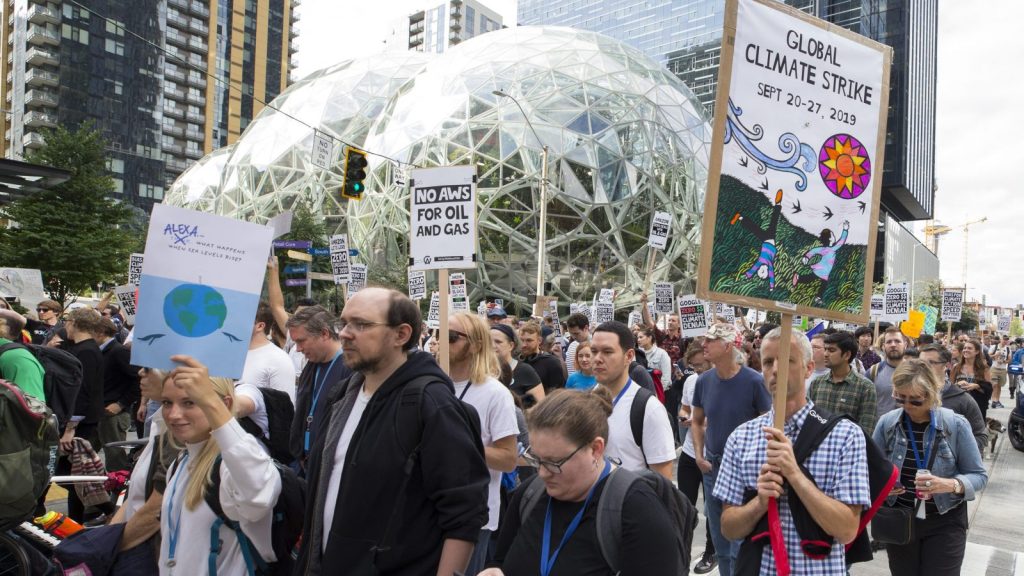 Amazon told its workers not to criticize its climate policies. They didn’t listen.

Hundreds of Amazon employees are risking their jobs to speak out about climate change. “We are scared,” an activist employee group said in a tweet on Monday. “But we decided we couldn’t live with ourselves if we let a policy silence us in the face of an issue of such moral gravity like the climate crisis.” That message accompanied a video in which dozens of current Amazon employees looked into the camera while holding up signs saying “We won’t be silenced” and “We need to speak out.”

1/ Hundreds of us decided to stand up to our employer, Amazon. We are scared. But we decided we couldn’t live with ourselves if we let a policy silence us in the face of an issue of such moral gravity like the climate crisis. #AMZNSpeakOut pic.twitter.com/zWIKku4LF6

The showdown between the tech giant and its employees began last summer, when the employee group, Amazon Employees for Climate Justice (AECJ), called on the company’s shareholders to adopt a climate change resolution that was ultimately backed by more than 8,700 Amazon workers. That resolution was swiftly voted down. In early September, AECJ members announced their intention to walk out of work on September 20 in solidarity with youth climate activists striking all over the world. The day after that announcement, Amazon updated its external communications policy to require employees to seek approval from management before speaking publicly about Amazon.

A couple of weeks later, Amazon CEO Jeff Bezos unveiled a climate plan that aims for net-zero carbon emissions by 2040 — a decade ahead of the deadline laid out in the Paris climate agreement. Though AECJ takes credit for pressuring Amazon to put out a climate plan, members said it wasn’t nearly comprehensive enough. Amazon employees around the world walked out as planned on September 20, with thousands of employees joining the protest in front of Amazon headquarters in downtown Seattle.

A few weeks after that, Amazon put out a “manifesto” explaining many of its positions on topics ranging from minimum wage requirements to climate change. Two AECJ members, Jamie Kowalski and Maren Costa, publicly criticized the manifesto, telling the Washington Post that it “distracts from the fact that Amazon wants to profit in businesses that are directly contributing to climate catastrophe.” According to the Post, Kowalski and Costa were subsequently warned by Amazon HR that they had violated Amazon’s external communications policy by speaking negatively about the manifesto. An Amazon lawyer warned the employees that speaking out again could “result in formal corrective action, up to and including termination of your employment with Amazon.”

In response to the threat of firing, Amazon workers decided to speak out en masse. On Sunday, AECJ circulated unauthorized statements about climate change from 357 employees, including their first and last names and positions at the company.

“It is unconscionable for Amazon to continue helping the oil and gas industry extract fossil fuels while trying to silence employees who speak out,” Amelia Graham-McCann, a senior business analyst, wrote. “Amazon already knows we are nothing without our customers — let’s do all we can to ensure there will still be people around to be our customers in 10, 20, 50, and 100 years,” wrote Brian Colella, a copy editor. “Hell, if Microsoft can do it (go carbon negative), why can’t we?” Austin Dworaczyk Wiltshire, senior software development engineer, asked, referring to the ambitious climate plan recently unveiled by another tech giant.

AECJ has demanded that Amazon speed up its decarbonization timeline from net-zero by 2040 to net-zero by 2030. The group also wants the company to stop providing web services and machine learning technology to oil companies and to stop funding lobbying groups and politicians who deny climate change is real. In an internal email to employees on Martin Luther King Day, AECJ explained that protesting the company’s policy was about more than just climate change. “It’s also about our ability to speak up on other issues like racism and sexism in tech, treatment of warehouse workers, donations to anti-LGBTQ politicians, and complicity with ICE,” they wrote.

In a statement, Amazon spokesperson Drew Herdener said employees are welcome to bring their concerns to company leadership internally, if they keep those conversations confidential. “While all employees are welcome to engage constructively with any of the many teams inside Amazon that work on sustainability and other topics, we do enforce our external communications policy and will not allow employees to publicly disparage or misrepresent the company or the hard work of their colleagues who are developing solutions to these hard problems,” Herdener said.

But, in an AECP press release, Paul Johnston, a former senior developer advocate at Amazon who parted ways with the company in no small part because of its climate policies, said bringing up the issue internally didn’t work. “When I raised climate change concerns while an employee, around AWS [Amazon Web Services] carbon footprint, I was met with very little support for change, and with the standard PR lines about how seriously Amazon was taking the issue,” he said. “Nothing changed until employees began speaking out.”