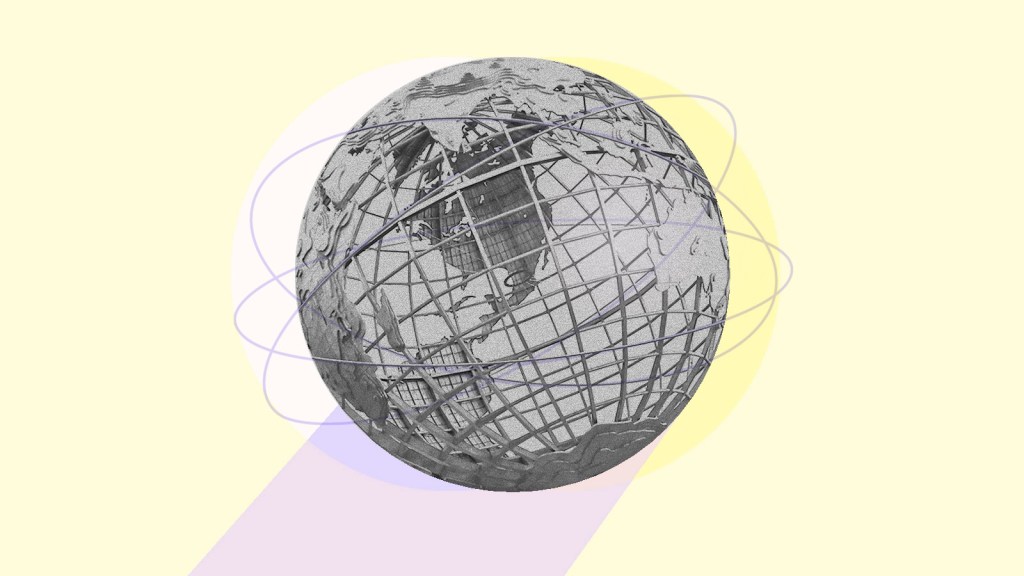 Last week I took a day off from work. For two months the pandemic had prevented me from going more than a few miles from my Brooklyn apartment, and I wanted to feel the freedom of travel and motion. So when I woke up I decided to bike about 10 miles to Flushing Meadows-Corona Park, the site of the 1964-65 World’s Fair. There’s not much left of the fair besides a couple of rusted, space-age towers that look straight out of The Jetsons. But one gleaming relic remains: a 15-story, 700,000-pound steel representation of the globe dubbed “the unisphere.”

What captivates me about the unisphere is, ironically, its utter irrelevance to my life now. The world map has never seemed like such an abstraction. I’ve been fortunate enough to set foot in more than half of the world’s continents, but when their shapes appeared in steel before me last week they might as well have been the indecipherable runes of a lost civilization. I haven’t been in a plane, train, or automobile in two months. And for the first time in my adult life, I don’t know when I’ll sit in one again. The only map of my world that has any tangible meaning now lies between the Long Island Sound and the shores of Rockaway Beach.

I guess I’m surprised that I don’t find this new limitation all that depressing. After all, the idea that “the good life” involves traipsing around the globe is relatively new — and intimately tied to the fossil fuel extraction that has made such travel widely accessible. The vast majority of people who have ever lived found meaning within much smaller maps. And if we want to limit climate change to levels that will mitigate catastrophe, we may need to get used to doing so once again.

This is not an argument that individual consumption choices could ever be reformed in such a way that they would avert climate catastrophe on their own, even on a massive scale. Indeed, as my colleague Shannon Osaka has pointed out, we are living through a natural experiment in that hypothesis, and it’s being disproved: The world is on track to emit more than 90 percent of its typical carbon dioxide emissions in 2020, even on lockdown.

Structural shifts in the way society produces and distributes goods, builds space for work and living, and generates electricity are the only paths to meaningful climate action. But that doesn’t change the fact that many of us have consumption habits — particularly when it comes to travel — that are simply incompatible with a world where we take global warming seriously. Why not use this moment, when those habits have been stripped from us, to imagine a life where we would willingly give them up?

Don’t get me wrong: I want to visit my parents in North Carolina, meet colleagues in Seattle, and climb boulders in pretty much every corner of the earth. But if I want to maintain with a straight face that I am personally doing something to limit global warming, I can’t go back to thoughtlessly fulfilling those desires when this pandemic ends. So I’m thinking about what it would take to make different choices. It might start with learning to live with smaller maps.