Could FOMO and peer pressure help save us all? - Grist 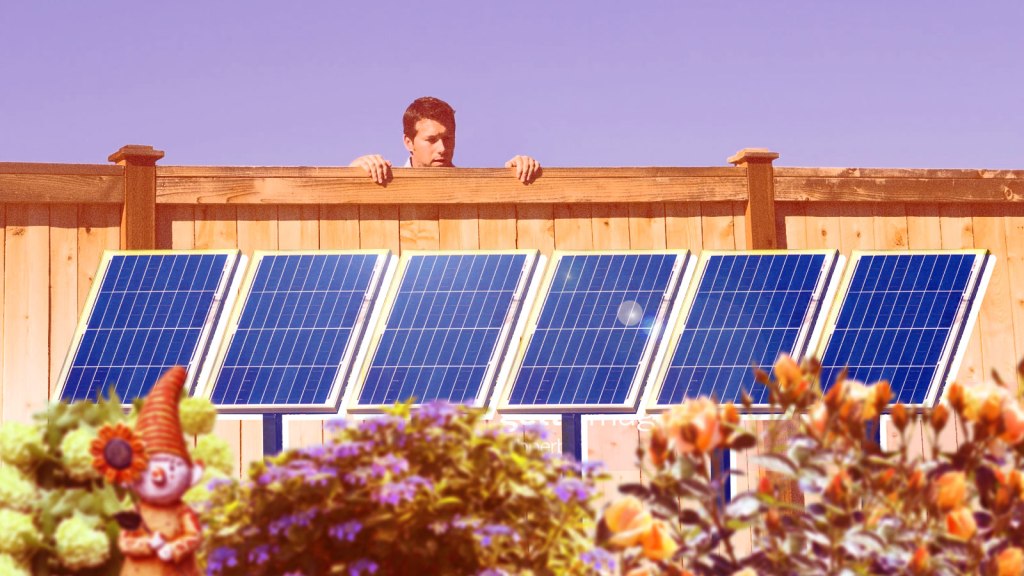 Could FOMO and peer pressure help save us all?

Thinking about installing solar panels, buying an electric vehicle, or eating less meat? You probably have your friends and neighbors to thank for that.

A growing body of literature suggests that our spending habits are contagious. When you see solar panels sparkling atop someone’s rooftop, for example, your roof suddenly looks barren by comparison. Likewise, when you receive a bill comparing your electricity usage to that of your neighbors, you’re more likely to adjust your energy usage up or down to match.

A recent paper in the journal Nature Energy reviewed the existing research on social influence and personal energy habits and concluded that peer pressure plays a major role in why we do what we do. “In some instances,” the authors write, “these social influences are even more powerful than cost or considerations such as convenience or effectiveness.”

Perhaps you’ve seen the black-and-white Candid Camera clip from the 1960s, where an unsuspecting man enters an elevator where everyone’s facing the wrong way — and eventually turns around to face the back. It’s kind of hilarious, but there’s logic behind people’s impulse to conform.

“Life is complicated,” said Robert H. Frank, an eminent economist and the author of the new book Under the Influence: Putting Peer Pressure to Work. “You don’t know anything, but nobody else knows anything either. But together, other people know a lot more than you do. And so if you see other people confidently taking some action, that’s at the very least a reason to investigate why it might make sense for you to do so too.” Following the crowd is an adaptive behavior; we’re hard-wired for it. If other folks in the cave are eating those red berries without dying, then the berries are probably safe to eat.

In the book, Frank shines a light on how that old instinct helped mess up the planet. “The behaviors that spawned the climate crisis are perhaps even more contagious than smoking,” he writes. Flying to destination weddings, driving oversized SUVs, building ever-expanding mansions: the main reason why people do these things is simple — their friends do them first.

These same social forces can also be harnessed to take on climate change, as individual decisions gather strength. “Flight shame” has recently taken off in Europe, reviving rail travel as people opt to take fewer flights. In the United States, the meatless Impossible Burger has surged in popularity, making its way to Burger Kings everywhere. The transportation industry is also susceptible to peer pressure, Frank writes in his book, and lucky us: Bike-share services and electric cars are on the rise.

Peer pressure can have a most powerful effect when people don’t have a strong opinion about the issue at hand, according to the recent Nature Energy review. If somebody’s already made up their mind that they’re a meat-eater and proud of it, they’re probably less likely to order the Impossible Burger at the counter, even if everyone else is doing it.

The messenger matters. A raving review from a new Prius owner will probably matter more to you coming from your best friend instead of from strangers. “Friends and family are often among the most trusted sources of information,” said Kimberly Wolske, the lead author of the Nature Energy study and an assistant professor at the University of Chicago’s Harris School of Public Policy, in a statement accompanying the study. “Policies and programs that seek to promote low carbon technologies may benefit from enlisting the help of peers who have already adopted them.”

The emerging research on the power of peer pressure might even lend some credence to the idea that individuals can make a difference. Economists who focus on climate change tend to scoff at the narrative of individual action, and for good reason — one study suggests that emphasizing individual solutions, like voluntarily cutting down on energy use at home, could diminish support for wide-scale policy solutions, like a carbon tax. Frank used to be one of those economists, but he’s changed his mind. When you do something good for the environment, he said, that’s not the end of the story.

Beyond that, small actions like biking or composting can add up to change your identity over time, Frank said. “When you change what you eat, when you bike rather than drive, you become a different kind of person,” he said. Eventually, those new behaviors become part of your personality. They might turn a reluctant recycler, say, into the kind of person who joins a climate protest or canvasses for candidates who support strong environmental protections. “None of those are things economists expect people to do,” Frank said, but people do them anyway.

Peer pressure and gentle nudges, of course, aren’t enough to take on a problem as big as the planet. That requires building a massive movement to force governments to take action. But that task would be difficult to accomplish without the energy of a bunch of motivated people roping their friends into the action.