In the fall of 2018, thousands of activists in London drew the world’s attention by blockading bridges, supergluing their hands to government buildings, and getting arrested by the dozens. Waving colorful flags with the “extinction symbol,” an hourglass inside a circle, demonstrators from Extinction Rebellion warned that time was running out to tackle the planet’s ecological crisis. They started staging “die-ins” and pouring fake blood made from beets all over the streets.

The point was to get attention, and it worked. In the summer before these protests, there were only 10 people in Extinction Rebellion, also known as XR; by December, the movement had spread to 35 countries. The Guardian declared it “the fastest-growing environmental organization in the world.”

The rebellion soon came to the United States — to a degree. “Until I saw what XR was doing in the U.K. in 2018, I didn’t realize that it was something I ever wanted to do,” said Christina See, now an organizer for the New York City chapter of Extinction Rebellion. The decentralized organization has about 70 local groups around the United States, and the offshoot organization XR Youth US has a couple dozen more. But in New York City, home to 8 million people, only a few hundred are active with XR, according to See. By contrast, protests in London, a city of nearly 9 million, brought out thousands in 2019.

Extinction Rebellion isn’t making headlines as often as it did in the past, partly because the COVID-19 pandemic has kept many at home, and also because racial-justice protests in response to the killing of George Floyd have taken center stage in the U.S. and Europe. But organizers say that the movement isn’t going anywhere. Extinction Rebellion now has more than 1,000 local groups spread around the globe, from Argentina to Zambia. Just this week, XR protesters in Adelaide, Australia, blocked rush-hour traffic by gluing themselves to the pavement and releasing smoke flares. “I don’t see XR fading away at any point,” See said. “I think it’s just going to grow.”

One possible reason XR has yet to blow up in the United States like it did in the United Kingdom: cultural and political differences. “The blueprint was created with England in mind,” said Daze Aghaji, a 20-year-old climate activist in the U.K. who was an early member of XR Youth, an offshoot of the movement. (Aghaji is currently taking a break from Extinction Rebellion for self-reflection, but expects to return.)

Aghaji said she’s worked with XR groups all over the world, and “some of them expect it as a ‘one glove fits all’” kind of situation. Instead, Aghaji said, groups need to adapt to local circumstances. For example, she said, laws around arrest are different in the United Kingdom from other places in the world. “If you do road-blocking in the U.K., you get warnings before they arrest you,” she said. “So if a new person comes in, they can feel comfortable to sit on the road. And then if they feel uncomfortable and don’t want to get arrested, they can get up when they get their warning.”

It’s not just tactics that need to be adapted — capturing the playful spirit of the movement also requires translation. In the U.K., protesters have danced in the streets, shown up in elaborate carnival costumes, and occasionally worn nothing (save for signs protesting fast fashion). “There’s a lot of jokes that a lot of Americans see on XR logos and XR banners that you don’t quite get,” Aghaji said. “It’s because it’s very British.” She pointed to how Extinction Rebellion UK has used the phrase “Eton mess,” the name of a traditional British dessert, to make fun of government officials that went to Eton, an elite boarding school famous for churning out prime ministers, like David Cameron, Boris Johnson, and some 18 others.“You have to use your own cultural expressions to get that funniness and quirkiness that the spirit of XR is,” she said. 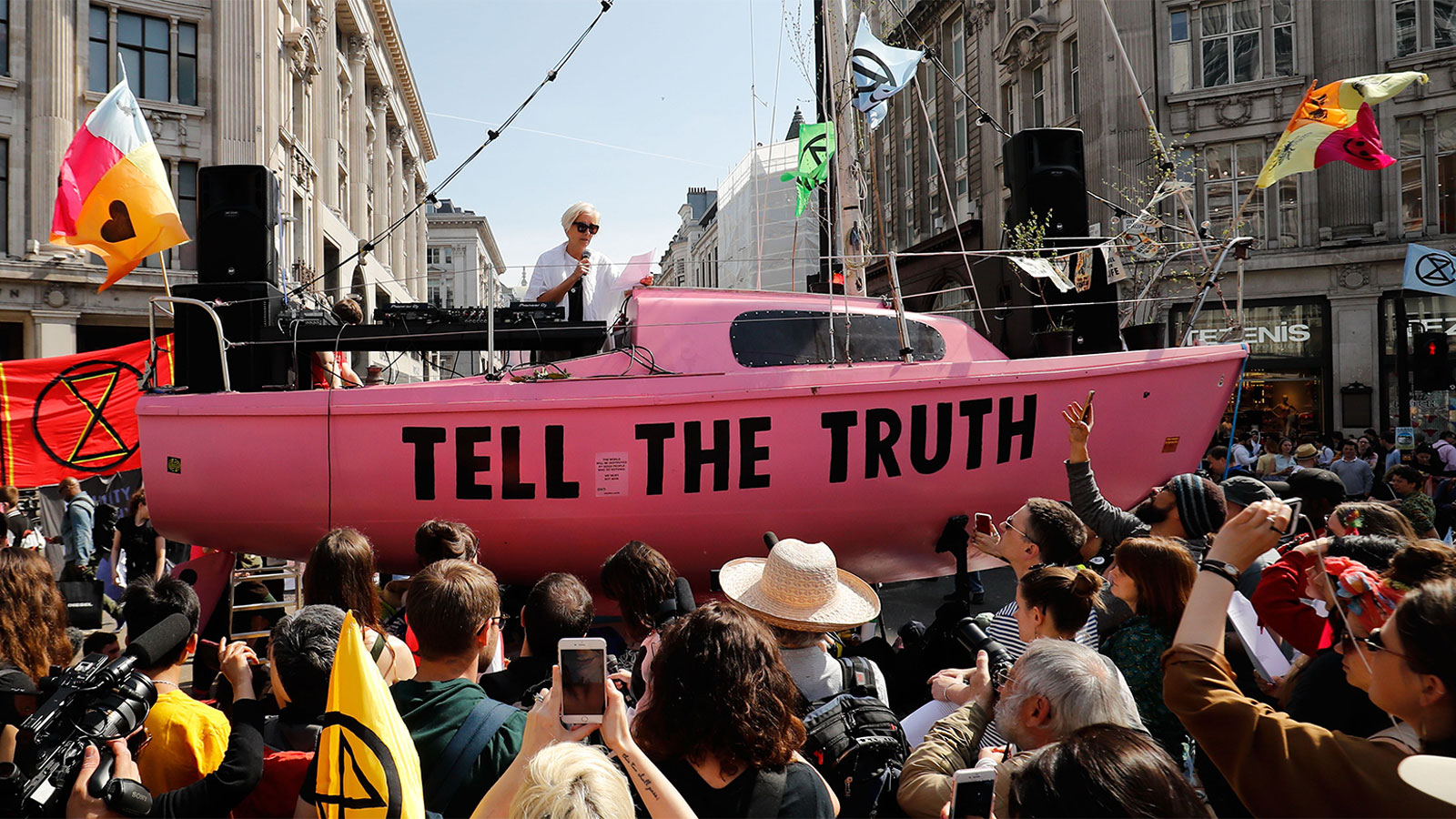 Extinction Rebellion simply isn’t very recognizable to the average American yet, said Dana Fisher, a professor of sociology at the University of Maryland. “I hate to use the term ‘brand’ to talk about an organization,” she said, “but they have a very clear brand loyalty and brand identity in Europe and in the U.K.”

XR’s U.S. wing declined interview requests for this story, saying that the national organization is undergoing changes. “The present interim team is serving in a caretaker capacity and does not feel empowered to speak in the name of our chapters,” XR US said in a statement to Grist.

To be sure, a lot was going on with American activism during the middle of the Trump era, when Extinction Rebellion arose. In the United States, progressive activists were busy protesting the Muslim ban, the Mexico border wall, federal attacks on science, and so much else. Among those protesting for climate action, the United States had an “extremely dense organizational landscape” of climate groups already, Fisher said; the youth-focused Sunrise Movement ended up catching on instead. Extinction Rebellion activists tend to lean older, she said, though they include organizers of all ages.

That said, Fisher thinks Extinction Rebellion still has a shot at taking off in the U.S. “A lot of groups are going to start to try to focus on how they can support the Biden administration as they work on specific issues,” Fisher said. That could create an opening for groups that want to push back at the administration’s policies, saying they aren’t going far enough — and the splashy protests that Extinction Rebellion became known for could provide a template. “If there’s an opportunity for nonviolent civil disobedience that people feel safe doing, they could then mobilize people,” Fisher said.

Extinction Rebellion organizers might have other things in mind. “A lot of our work with Extinction Rebellion isn’t just on the streets protesting,” See said. It’s also focusing on pushing the media and local governments to take the climate crisis more seriously. The movement has recently shifted to a new campaign on “financial disobedience,” taking aim at the investment giant BlackRock and banks financing fossil fuel infrastructure. This so-called Money Rebellion aims to use nonviolent direct action, “debt strikes,” and social media to “expose and disrupt the economic rules and institutions driving us toward societal collapse: growth, debt, banks, the government.”

The lockdowns last year really changed things, Aghaji said. “Our thing was about being physical, using your body as a tool,” Aghaji said. “We had to very rapidly go, how do we hold government accountable without physically doing what we’re so used to doing?”

Critics in the U.K. have argued that Extinction Rebellion hasn’t been sensitive enough to matters of race, an issue that led to a schism among XR activists in the U.S. Aghaji said that XR has done a lot of internal work around anti-racism that’s not reflected when outsiders see mostly white organizers blocking the road.

“I do think XR did make a lot of mistakes,” Aghaji said. “In all honesty, I think that we should give a little bit of forgiveness, because we’re a really young organization.” Being in XR, she said, felt like trying to build an airplane while you’re already flying it.

A Midwest pipeline promises to return carbon dioxide to the ground