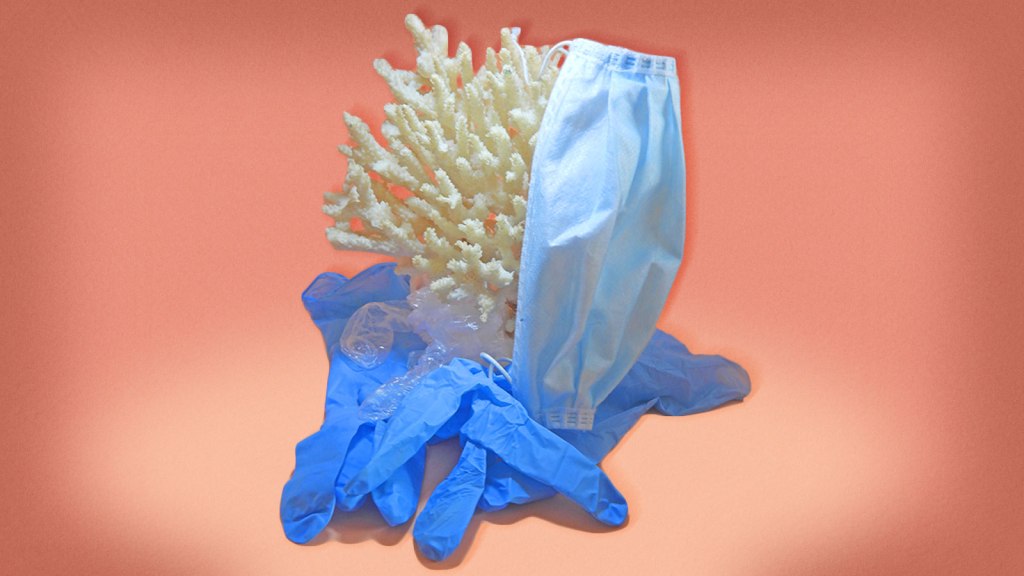 Are oil companies the true heroes of the COVID-19 pandemic? That’s sure what they’d like you to think. In a recent flurry of “corporate reputation advertising” highlighted by Emily Atkin in the newsletter HEATED, oil and gas companies, plus the American Fuel and Petrochemical Manufacturers (AFPM) — an industry group that counts Chevron, Exxon, Citgo, and many others among its members — put out a series of Twitter ads arguing that, since oil and gas companies supply petroleum to manufacturers of face masks, hand sanitizer, and protective suits, they are helping keep the population safe and healthy.

The industry is “supplying armor in the battle against COVID-19,” one ad from AFPM claimed. “The central role of petrochemicals in health care underscores why the U.S. government classifies the petrochemical industry as critical infrastructure.”

There’s validity to the claim that single-use personal protective equipment (PPE) is helping keep people safe from coronavirus-carrying airborne droplets. But some environmental advocates worry that increased plastic production will come with its own unintended consequences.

Most obvious is an uptick in plastic pollution. Already the oceans are inundated with a flow of 13 million metric tons of plastic annually, according to a 2018 estimate from the United Nations Environment Program (although the true quantity remains unknown). Considering the vast amounts of PPE products that countries are now calling for in order to protect their citizens — demand for face masks alone numbers somewhere in the billions — it’s easy to see why people are concerned.

Not much data has been released on the fate of “Covid waste,” but anecdotal evidence abounds: Around the world, environmental activists are finding gloves, masks, and empty bottles of hand sanitizer everywhere they shouldn’t be. In France, members of the nonprofit Opération Mer Propre (translated, “Operation Clean Sea”), which leads beach clean-up efforts along the Côte d’Azur, have been posting photos and videos of the litter online — masks cluttering up the rocky seafloor, divers wading through used gloves. “Soon we’ll run the risk of having more masks than jellyfish in the Mediterranean,” one member wrote on social media.

Gary Stokes, a campaigner with the advocacy group OceansAsia, told the Guardian he’s even finding them on desert islands. After recently combing the beaches of the uninhabited Soko Islands off the southwestern coast Hong Kong, he found 70 disposable masks on a slice of beach roughly the length of a football field. Ever since people started wearing the masks in response to the coronavirus outbreak, he said, they’ve been popping up all along the water’s edge. It’s “just another item we’re leaving as a legacy to the next generation,” he told the Guardian.

We’re facing the same problems in the United States. John Hocevar, oceans campaign director for Greenpeace USA, says PPE litter can be found wherever people are — and beyond, when it’s transported by wind and water. In Washington, D.C., he sees PPE being discarded on the streets, where it can easily be washed down storm drains and into the Anacostia River. “It only takes one rainstorm,” he told Grist. The Anacostia then carries the waste into the Potomac River, which flows into the Chesapeake Bay and eventually spills out into the Atlantic Ocean.

Pretty much all plastic in the oceans is bad news, but PPE pollution presents particularly difficult challenges for marine life. Turtles and other animals often choke on plastic debris, mistaking it for food. “I can’t think of a material better designed to look like a jellyfish than gloves,” Louisiana State University professor Mark Benfield told CNN. And masks with elastic bands can easily cause entanglements with marine animals.

Beyond that, there’s the risk of chemical contamination — as plastic debris slowly breaks apart into tiny fragments known as microplastics, it releases chemicals that may be harmful to the animals that end up eating it. Those animals include humans: Plastic ingested by smaller fish gets incorporated into the bodies of progressively larger animals, all the way up the food chain until it arrives on our dinner plates.

But Hocevar says there’s more to worry about than the glut of plastic face masks and sanitizer bottles making their way into the oceans. Plastic “is a huge hazard before it’s even created,” he told Grist. Petrochemical factories like plastic production plants are notorious for their disproportionate impacts on low-income communities and communities of color. Toxic air emissions from these facilities have been linked to a litany of health problems, including cancer, heart disease, and reproductive and developmental disorders.

So naturally, Hocevar and other environmental advocates are concerned about the oil and gas industry’s plastics ramp-up. Production has quadrupled over the past four decades and continues to rise. Even before COVID-19, ExxonMobil was banking on plastic, telling shareholders last summer that the company would offset profit losses from the transition to electric cars by increasing its production of petrochemicals like plastic. Now, amid the triple crises of the pandemic, a brutal oil price war, and countries’ recognition of the urgent need to cut emissions, a situation the Financial Times has described as a “hellscape” has emerged, and many oil and gas companies see plastic as a lifeline.

Although these companies have helped provide equipment crucial to keeping people safe during the pandemic, they have also drawn scrutiny from environmental activists who are skeptical of their motives, saying they have quickly mobilized to take advantage of people’s uncertainty about the virus.

“It’s cynical opportunism,” Hocevar told Grist. “It has been really disgusting to watch the plastic industry exploit people’s fears … at a time when everyone is just trying to understand what they need to do to keep themselves and their families safe.”

Industry spokespeople have insisted to policymakers and the public that single-use plastics are safe and that reusables are dirty and dangerous. On March 18, for example, industry lobbyists penned a letter directly asking the U.S. Department of Health and Human Services to speak out against pending state and local bans on single-use plastic, calling the bans a “public safety risk.”

It remains to be seen how the industry will balance that public safety risk with the other risks of plastic, including the flood of PPE plastic entering the oceans. The University College London Waste Innovation Hub calculated that replacing disposable masks with reusable ones would mitigate climate change. This disposable plastic equipment could be swapped for gear that can be cleaned, sterilized, and reused.

The same goes for more than just PPE. Hocevar says there’s overwhelming evidence that we rely on plastic for too many things — that’s why, in spite of everything, many cities and businesses have not canceled their transition away from single-use plastics; they’ve just deferred it. In the long term, that transition will help address the escalating problems of climate change and ocean pollution, which impact all life on earth. Plastic is “not just bad for turtles, but for humans,” Hocevar told Grist.