Elizabeth Kolbert on why we'll never stop messing with nature 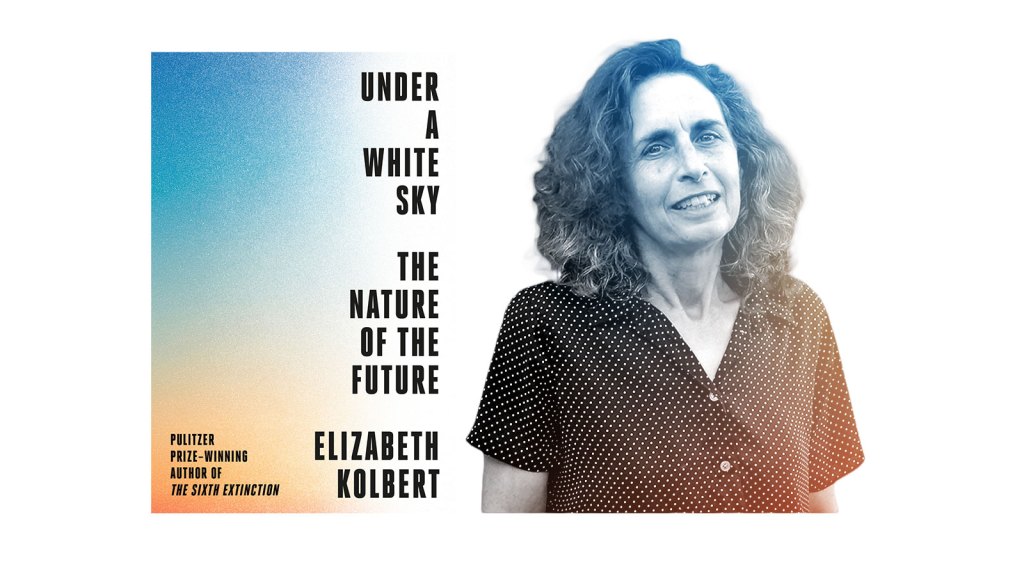 In Australia, scientists collect buckets of coral sperm, mixing one species with another in an attempt to create a new “super coral” that can withstand rising temperatures and acidifying seas. In Nevada, scientists nurse a tiny colony of one-inch long “Devil’s Hole pupfish” in an uncomfortably hot, Styrofoam-molded pool. And in Massachusetts, Harvard University scientists research injecting chemicals into the atmosphere to dim the sun’s light — and slow down the runaway pace of global warming.

These are some of the scenes from Elizabeth Kolbert’s new book, Under a White Sky, a global exploration of the ways that humanity is attempting to engineer, fix, or reroute the course of nature in a climate-changed world. (The title refers to one of the consequences of engineering the Earth to better reflect sunlight: Our usual blue sky could turn a pale white.)

Kolbert, a New Yorker staff writer, has been covering the environment for decades: Her first book, Field Notes from a Catastrophe, traced the scientific evidence for global warming from Greenland to Alaska; her second, The Sixth Extinction, followed the growing pace of animal extinctions.

Under a White Sky covers slightly different ground. Humanity is now, Kolbert explains, in the midst of the Anthropocene — a geologic era in which we are the dominant force shaping earth, sea, and sky. Faced with that reality, humans have gotten more creative at using technology to fix the problems that we unwittingly spawned: Stamping out Australia’s cane toad invasion with genetic engineering, for example, or using giant air conditioners to suck carbon dioxide out of air and turn it into rock. As Kolbert notes, tongue-in-cheek: “What could possibly go wrong?”

This interview has been condensed and lightly edited for clarity.

Q. Under a White Sky is about a lot of things — rivers, solar geoengineering, coral reefs — but it’s also about what “nature” means in our current world. What got you interested in that topic?

A.All books have complicated births, as it were. But about four years ago, I went to Hawaii to report on a project that had been nicknamed the “super coral project.” And it was run by a very charismatic scientist named Ruth Gates, who very sadly passed away about two years ago. We have very radically altered the oceans by pouring hundreds of billions of tons of CO2 into the air — and we can’t get that heat out of the oceans in any foreseeable timescale. We can’t change the chemistry back. And if we want coral reefs in the future, we’re going to have to counter what we’ve done to the oceans by remaking reefs so they can withstand warmer temperatures. The aim of the project was to see if you could hybridize or crossbreed corals to get more vigorous varieties.

This idea — that we have to counteract one form of intervention in the natural world (climate change) with another form of intervention (trying to recreate reefs) — just struck me as a very interesting new chapter in our long and very complicated relationship with nature. And once I started to think about it that way, I started to see that as a pretty widespread pattern. That’s really what prompted the book.

Q.Some of these human interventions to save nature seem hopeful and positive — and others go wrong in pretty epic ways. How do you balance those two types of stories?

A.The book starts with examples that probably will strike many Grist readers as “OK, that makes sense. That makes sense.” But it goes from regional engineering solutions through biotechnology, through gene editing, and all the way up to solar geoengineering. So it kind of leads you down what we might call “a slippery slope.” And one of the interesting things about these cases is that they will divide up people differently. Even people who consider themselves environmentalists will come down on different sides of some of these technologies. The bind we’re in is so profound that there’s no right answer.

Q.So someone who accepts what we’re doing to save the Devil’s Hole pupfish might not necessarily accept gene-editing mosquitos or dimming the sun through solar geoengineering.

A.Exactly. And I think sometimes those lines seem clearer than they are once you start to think about it.

Q.At one point in the book, there’s a quote that is (apocryphally) attributed to Einstein: “We cannot solve our problems with the same thinking we used when we created them.” But you don’t say whether you agree with that sentiment or not. Is that on purpose?

Q.When you write about geoengineering, you point out that many scientists conclude that it’s necessary to avoid catastrophic levels of warming, but that it could also be a really bad idea. Do you think that in 15 or 20 years you’ll be writing about a geoengineering experiment gone wrong, much as you’re writing now about failed attempts to protect Louisiana from flooding?

At the moment, it’s still the realm of sci-fi, and I’m not claiming to have any particular insight into how people are going to respond in the future. But the case that’s made in the book by some very smart scientists is that we don’t have very many tools in our toolbox for dealing with climate change quickly, because the system has so much inertia. It’s like turning around a supertanker: It takes literally decades, even if we do everything absolutely right.

Q.You’ve reported on climate change for a long time. How does it feel to see geoengineering being explored as a more valuable — and potentially necessary — option?

A.Well, one thing I learned in the course of reporting the book was that what we now refer to as “geoengineering” was actually the very first thing that people started to think about when they realized we were warming the climate. The very first report about climate change that was handed to Lyndon Johnson in 1965 wasn’t about how we should stop emitting — it was: “Maybe we should find some reflective stuff to throw into the ocean to bounce more sunlight back into space!”

It’s odd, it’s kind of almost freakish, and I can’t explain it, except to say that it sort of fits the pattern of the book.

Q.There’s been a longstanding fight in environmentalism between a “technology-will-save-us” philosophy and a “return-to-nature” philosophy. Based on the reporting in this book, do you think that the technology camp has won?

A.I think the book is an attempt to take on both of those schools of thought. On some level, technology has won — even people who would say “don’t do geoengineering” still want to put up solar panels and build huge arrays of batteries, and those are technologies! But where does that leave us? It goes back to Ruth Gates and the “super coral project”. There was a big fight among coral biologists about whether a project like that should even be pursued. The Great Barrier Reef is the size of Italy — even if you have some replacement coral, how are you going to get them out on the reef? But Gates’s point was, we’re not returning. Even if we stopped emitting CO2 tomorrow, you’re not getting the Great Barrier Reef back as it was in a foreseeable timeframe.

My impulse as an old-school environmentalist is to say “Well, let’s just leave things alone.” But the sad fact is that we’ve intervened so much at this point that even not intervening is itself … an intervention.

Q.Now that we have a U.S. president who takes climate change seriously, do you think we could actually start cutting carbon emissions quickly?

A.I really do want to applaud the first steps that the Biden administration has taken. I think they show a pretty profound understanding of the problem. But the question, and it’s a big one, is “What are the limits?” Will Congress do anything? What will happen in the Supreme Court? The U.S. is no longer the biggest emitter on an annual basis, but on a cumulative basis we’re still the biggest. And we still don’t have resolution on how much CO2 we can put up there to avoid 1.5 or 2 degrees Celsius of warming. Those are questions with big error bars. If we’re lucky, I think we can avoid disastrous climate change. But if we’re not lucky, we’re already in deep trouble.

Q.Is there anything else you want to say about the book?

A.It sounds kind of weird after our conversation, but the book was actually a lot of fun to write. It sounds odd when you’re talking about a book where the subject is so immensely serious.

Q.You mean like when the undergraduates in Australia are tossing each other buckets of coral sperm?

A.Yes! There is always humor in all these situations. I hope that sense of fun comes through.