Locusts and coronavirus: A Biblical nightmare strikes the horn of Africa 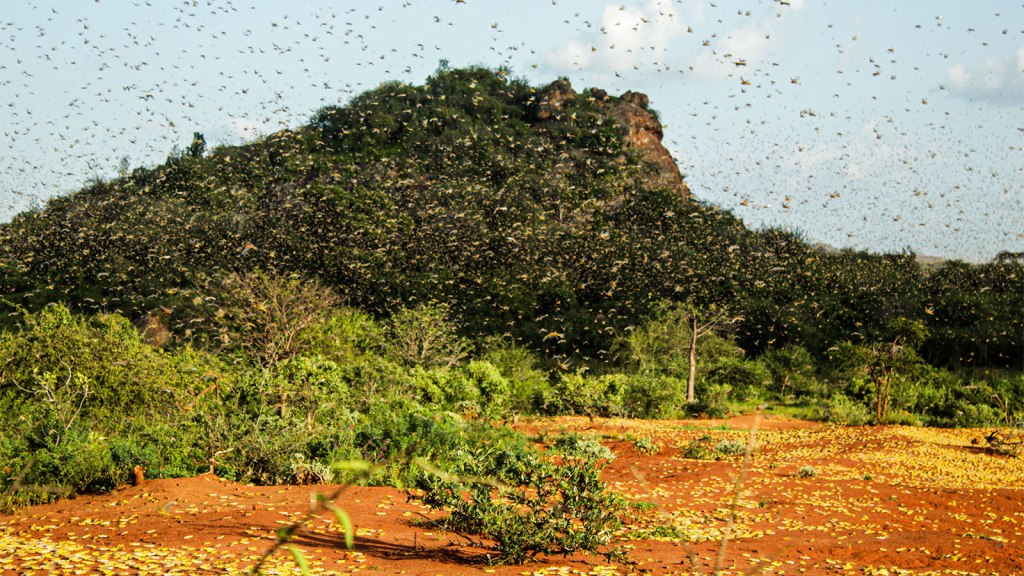 Locusts and coronavirus: A Biblical nightmare strikes the horn of Africa

What if COVID-19 had shown up in the United States last year, just as Hurricane Dorian forced people out of their homes and into shelters? What would it feel like to be told to shelter in place as wildfires approach your doorstep? It’s hard to imagine handling more than one disaster of this magnitude — but before the novel coronavirus struck the horn of Africa, countries already had a plague on their hands.

Toward the end of last year, swarms of desert locusts began flooding the region in numbers not seen in decades. Unusually wet weather over the previous 18 months — likely linked to climate change — created ideal breeding conditions for the insects. Since then, the swarms have multiplied across ten countries as continued rain during what is typically the dry season allowed each new wave of the insects to breed. The plague is especially threatening in Kenya, Ethiopia, and Somalia. Desert locusts are voracious eaters who travel in swarms the size of cities and will devastate crops, pastures, and forests if they aren’t controlled, posing a major threat to food security in countries where already 20 million people are food-insecure.

Despite the alarming numbers of swarms, they have not dramatically impacted the food supply yet, according to Cyril Ferrand, the East Africa resilience team leader for the Food and Agriculture Organization of the United Nations (FAO). When the locusts arrived in full force in late December, farmers had already secured their seasonal harvest.

“Our concern is for the season to come,” Ferrand told Grist. Farmers are beginning to plant now for the June/July harvest, just as a new generation of locusts are starting to mature. “There could be up to 100 percent losses,” said Ferrand. “That’s very clear.”

To kill as many locusts as possible, time is of the essence. That’s why Ferrand raised the alarm two weeks ago when a shipment of pesticides to Kenya was delayed due to coronavirus-related flight restrictions. When Grist spoke to him on Friday, he said the stock had been replenished, and that COVID-19 has not been a major impediment to control efforts yet.

In Kenya, where Ferrand is based, there have been under 200 confirmed cases of COVID-19 so far. Social distancing measures are in effect, and masks are mandatory in public places, but the country has declared controlling the locusts a national priority, so spraying and surveying have not slowed down.

The FAO began coordinating aid to affected countries in January and is trying to raise $153 million for control operations as well as to safeguard livelihoods. $114 million has been raised so far. On the control side, the organization provides pesticides and spraying equipment, including planes and trucks, as well as training to conduct surveillance and keep track of where swarms are moving.

But controlling the swarms is a sisyphean task.

“The locust infestation is happening in a very wide area, and you find that every time you are trying to control in one region, there’s another swarm that is happening in a different region,” said Ambrose Ngetich, an FAO project officer in a video produced by the organization. “It is not possible to control them simultaneously, because most of the time they are at different stages.”

Locusts bury their eggs 4-6 inches underground. Once they are laid, spraying cannot prevent a new generation from hatching.

Losses to crops and ranchlands are inevitable. That’s why the FAO also plans to provide cash to affected communities to buy food, compensate farmers so that they can purchase seed for the next planting season, and supply feed to livestock farmers whose pastures get devoured.

The COVID-19 pandemic has not slowed the battle to stop the locusts yet, but if the outbreak becomes more severe and countries begin implementing stricter lockdowns, it could bring control operations to a halt.

“We are talking about a region that is very fragile,” said Ferrand. “After the health impact, the economic one could be extremely severe for a long period of time.”