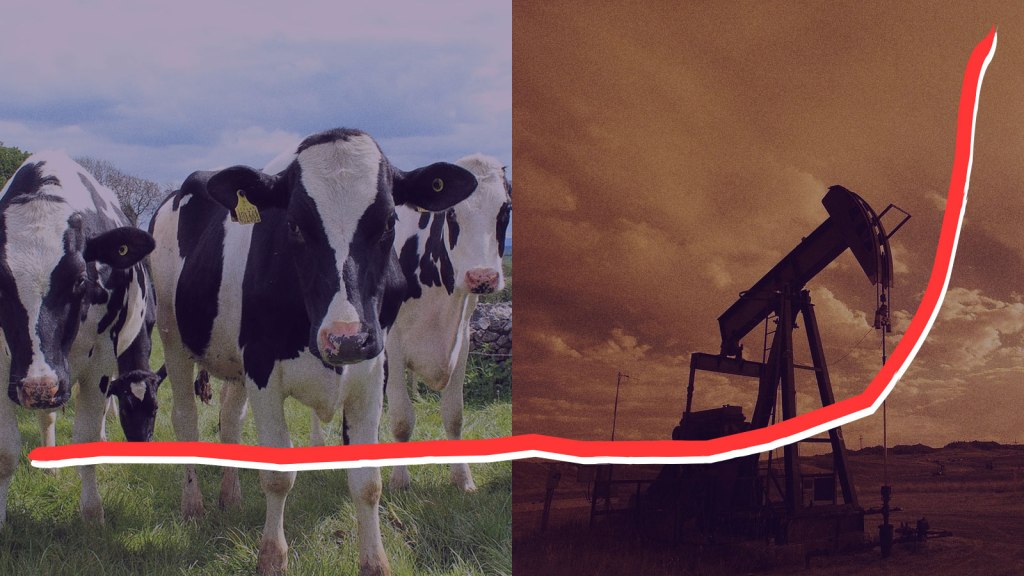 While the world has been focused on a global pandemic and widespread protests, another crisis is gathering in the atmosphere. And no, it isn’t carbon dioxide: It’s that other planet-warmer, methane, a colorless, odorless gas which traps 86 times as much heat as CO2. According to two new studies out Tuesday, a combination of agriculture and fossil fuel burning has boosted methane to a record-high 1,875 parts per billion in the atmosphere.

If unabated, the researchers warn, methane emissions could push the planet toward a world heated up by 3 to 4 degrees Celsius, one of the worst-case scenarios for global warming.

In the race over how to lower global greenhouse gas emissions, methane — a carbon atom joined to four hydrogen atoms — is often left out of the conversation. It doesn’t hang around in the atmosphere as long as carbon dioxide; when released into the air, it only takes about 9 years for half of it to dissipate and turn into other molecules. (Carbon dioxide, on the other hand, takes around a century.) But methane is responsible for a quarter of the world’s global warming since 1750. Tamping it down will be crucial for mitigating climate change.

“It’s a mistake to ignore methane,” said Rob Jackson, professor of earth system science at Stanford University and a co-author of both studies. “If we can reduce methane emissions quickly, we could shave a half-a-degree Celsius off peak temperatures.”

The problem is that methane keeps rising. And rising. Starting in 2007, methane emissions started climbing fast, after remaining fairly stable for the previous seven years. But scientists couldn’t figure out exactly why.

Some blamed fracking. When fossil fuel companies force water and chemicals underground to extract natural gas, they run the risk of methane leaking into the air. And studies have shown that, at least in the United States, these leaks are far larger than the government has admitted. Others pointed to the belching of methane from tropical wetlands, which depends on changes in temperature and precipitation, or to thawing Arctic permafrost releasing tons of fossilized methane into the air.

The new papers, however, tell a somewhat simpler story. Jackson and his coauthors blame the sharp increase on increased fossil fuel use and agriculture gobbling up land. Cows burp out huge quantities of methane in the process of their digestion; bacteria living in flooded rice paddies also spew out the gas.

Part of the problem is that the global population has surged to 7.7 billion over the past two decades — and many of those people are also eating more meat. “There are a billion and a half more people on Earth than there were in 2000,” Jackson said. “Emissions have gone up because of extra mouths to feed.”

Fossil fuels also play a big role, not just through fracking. Any time oil, gas, and coal are extracted from the ground, there is a risk of methane spilling out of rock formations into the air. Methane emissions from coal mining, for example, increased globally from 29 million metric tons between 2000 and 2006 to a whopping 44 million metric tons in 2017.

And, while carbon dioxide emissions fell when much of the world was locked down earlier this year (only to bounce back as shelter-in-place orders lifted), Jackson said that it’s unlikely we’ll see anything similar from methane emissions. Most of the decreases in CO2 emissions came from the transportation sector, as people stopped driving their cars and taking international flights. But as agriculture gobbles up more land and people continue to heat their homes with natural gas, methane emissions have continued climbing.

If there’s a source of optimism in the two studies, it’s Europe, where changing diets and better agricultural practices have decreased the amount of methane exhaled from the land. And despite repeated warnings that thawing Arctic soils could release huge quantities of methane into the atmosphere, researchers say that hasn’t happened — yet.