At some point in 2019, a time that feels so long ago that months-old memories are already sepia-tinged in my mind, the musician Grimes (née Claire Boucher) announced that she was going to release an album about climate change, Miss Anthropocene — a clever portmanteau of “misanthrope” and the term for the geological era defined by human influence on the planet.

While the collapse of global ecosystems might seem like an odd choice of muse for some artists, Grimes is, to be clear, extremely fucking weird. Her artistic persona is out of her gourd on the best of days. Par for the course, Miss Anthropocene seemed to cater to an extremely niche market — the intersection of people who know what “IPCC” stands for, fans of ethereal techno-pop, and the creepiest of Elon Musk stans. And yet when it was released in February 2020, it ended up topping the Billboard electro/dance chart.

The music is, like Grimes herself, largely deranged: a lot of guttural shrieking, long minor-key wails, and the artist’s signature airy register; wild vacillations among genres, from pop country to goth electronica; and impenetrably vague lyrics that probably have something to do with the apocalypse or dystopia. It’s kind of hard to tell what’s happening, and that’s the point.

When I listened to the album the day of its release, I was slightly baffled. I struggled to find any major climate message from Grimes beyond “the world is falling apart in these abstract and tenuous ways, and here I am losing my mind! Also, I’m in love with an eccentric and obnoxious billionaire.”

Little did I know that less than two months later, those feelings (except for the billionaire part; we are not all so lucky!) would become the defining ethos as the world around me spectacularly collapsed and shrunk due to the novel coronavirus.

Successfully tackling tragedy — especially climate tragedy — in a pop album no less, is no easy feat. There is a lot of very bad art about mass disasters, probably because mass disaster is, by nature, a big, blunt force of destruction. The art itself then also tends toward big and blunt; murals of rising water, unspeakably trite ballads about melting ice or something, and a couple of overwrought films with Mark Ruffalo. None of these do the experience of waiting for and living through global tragedy any justice; it is a long, exhausting slog of trying to process and react to a constantly shifting reality.

To actually work, I think that art about tragedy has to articulate something new about collective suffering — adding meaning, or in Miss Anthropocene’s case, near-prescience. The devastation we’re living through right now feels a bit more acute with a pandemic; that’s a matter of perspective, to be sure, and it’s almost entirely due to the fact that a pandemic moves so much more swiftly than climate change.

Shifting the “theme” of her album to apply to more than simple (ha) climate disaster was, as it turns out, well timed. Stuck inside for weeks at a time, endlessly scrolling, I now spend a great deal of time thinking about death and illness and suffering, which turns out is not so thematically different from the great deal of time I spent thinking about climate change. The first time I actually caught and processed the choral refrain on Grimes’ “4ÆM,” my personal pick for the strongest track on the album, I believe my jaw actually dropped: “I’m out late, at 4 a.m. / He says, “How’s the weather, baby? How’ve you been?” / You’re gonna get sick, you don’t know when.”

While the album was named for “the anthropomorphic goddess of climate change,” Grimes revealed during a conversation with Lana del Rey in Interview magazine that it’s actually a concept album in which each song is about a “different way to suffer or a different way to die.” Climate change, of course, being just one of those! She meant the album to be a modern interpretation of the type of ancient theology where all pain or misfortune or death could be attributed to the whims of a particular god:

“It’s like every form of suffering had a representation. I wonder if it almost has a positive psychological effect. If your kid dies in a war, you can literally go speak to War and be like, ‘Why did you do this?’ Or, ‘I hope you did this for a reason.’ There’s a weird philosophical justification for all pain, and there’s an anthropomorphization of every form of pain.”

I understand the appeal of thinking of climate change as a type of pain; particularly pain inflicted by some sort of mystical entity. Having someone or something to blame imparts a specificity on global ruin that somehow makes it easier to take. I guess fossil fuel companies or malfeasant government officials are the best incarnation of climate gods in this scenario, in which case all the kids suing them are the most poetic example of mortals begging to know, “Why did you do this?”

But that analogy is too mundane for Grimes, God bless her. “I wanted to make climate change fun,” she said to Crack magazine in a profile last year. “Miss Anthropocene” — the goddess inflicting climate change on us all — “has got a Voldemort kind of vibe. She’s naked all the time and she’s made out of ivory and oil. It’s going to be super tight.”

So climate change, by this conceit, is really more of a chaotic, vast-scale punishment inflicted on humanity by a malevolent — but hot — deity. Grimes is somehow able to pull that off! It is kind of tight — in this intoxicatingly chaotic way. And it more strongly evokes the introspective derangement and mass disorientation of living with the climate crisis on the near horizon than any other “climate art” I’ve encountered. Anyone with even a basic understanding of climate change is reckoning with the fact that they have no idea what the world will look like in just a couple of decades. We cannot look away, even if we want to. How could that not provoke even a minor sense of derangement?

Grimes is hardly the only introspective doom-obsessed weirdo in the game. Jenny Offill’s new novel Weather follows Lizzie, a librarian who signs on to help a mentor with a project answering questions about climate change — a word-for-word description of my own personal job — and begins losing her mind. 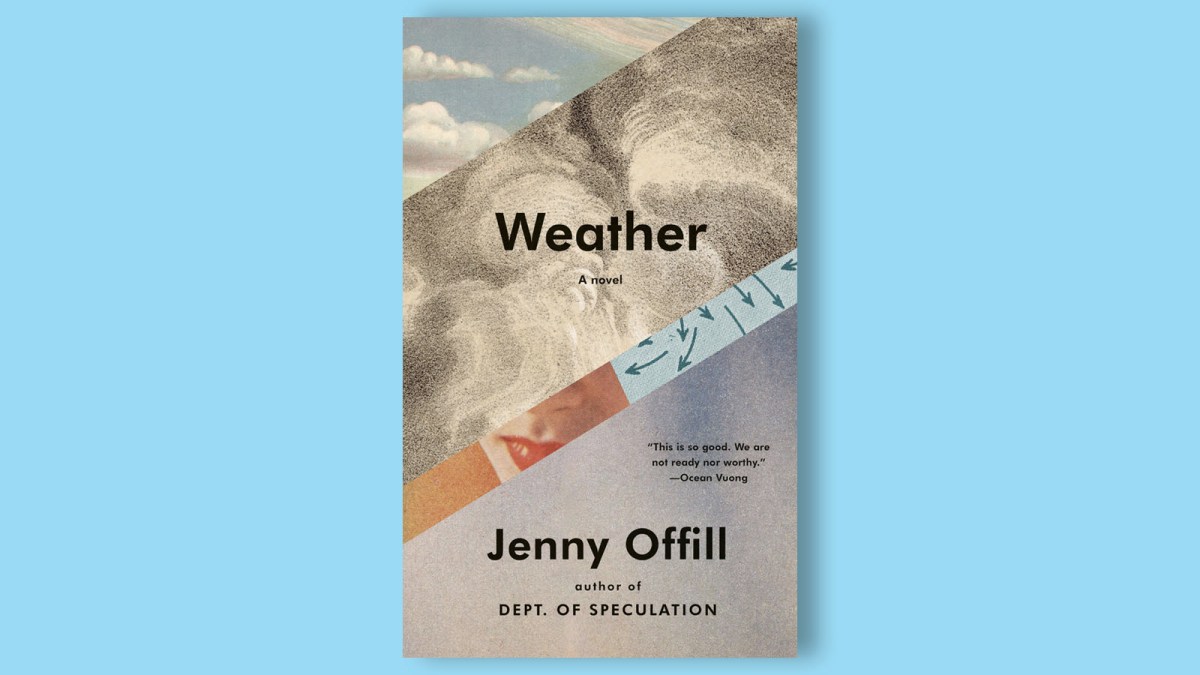 When I first heard the premise of Weather, I thought: I don’t know about this. Or rather, I don’t know if this is the “climate change novel I was waiting for.” I generally read to escape my own brain, so the prospect of delving into the interior musings of some woman who finds herself increasingly preoccupied with the climate-driven collapse of society, and how to survive said collapse, felt wearying.

But as with Miss Anthropocene, the current reality of the climate crisis and COVID-19 pandemic going down simultaneously actually made reading the novel feel kind of cathartic. I picked up a copy of Weather the day before I went into what I did not know would be several months of “social distancing.” At the time it felt like “some nice, relaxing time at home.” Now, it feels like a small, lovely prison sentence where my brain can run increasingly wild in its solitude. Lizzie’s life certainly goes through upheaval throughout Weather, but the action takes place primarily in her mind, swelling and never quite coming to a climax as her awareness of climate change grows and sharpens.

Weather, like Miss Anthropocene, is fundamentally a portrayal of the experience of sitting in wait for some kind of life-altering threat that’s entirely outside of your control. You wonder if it will come to you, and when, and how you will prepare for that moment. In the meantime, you may as well embrace the instability.

Amid pandemic, wildfires close in on abandoned Chernobyl nuclear site