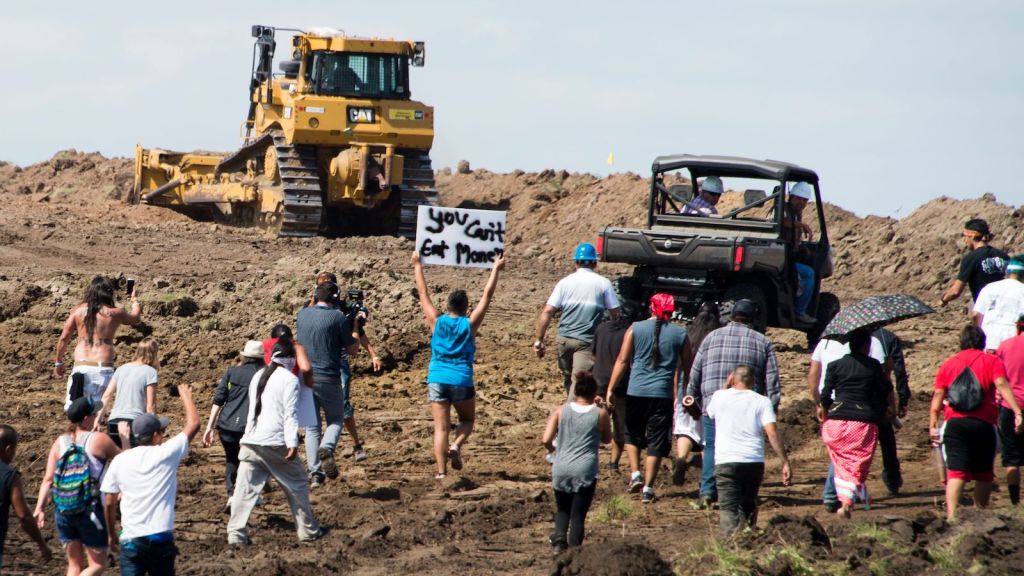 Protesters are confronted by security during a demonstration against the Dakota Access Pipeline in 2016. Robyn Beck / Getty Images
DAPL Down

It’s been a fitful few months for the Dakota Access Pipeline.

First, a federal judge ruled that the Army Corps of Engineers failed to carry out proper environmental reviews of the project before building the oil route under a vital waterway. Then, the same judge ordered the pipeline to shut down while the months-long reviews take place. Last month, the U.S. Court of Appeals for the District of Columbia Circuit staved off the latter order.

On Wednesday, the appeals court handed the pipeline and its Texas-based owner, Energy Transfer, another win, ruling that the Trump administration should decide whether it’s safe to continue operating while the project undergoes review.

But the decision isn’t a clear-cut victory for the controversial pipeline, which galvanized a national protest movement in 2016.

The Army Corps of Engineers, which is expected to greenlight the pipeline to keep pumping oil, must submit its reasoning for continued operation to the lower court that originally ordered the shutdown.

“This is something that kicks the can down the road three months, maybe four months, or however long the Army Corps can drag this out,” Brandon Barnes, a senior energy litigation analyst at the research firm Bloomberg Intelligence, said by phone.

The Army Corps isn’t expected to complete its review of the pipeline until the middle of next year.

If Democratic presidential candidate Joe Biden defeats President Donald Trump in November, the new administration could dramatically reverse the pipeline’s fortunes, particularly if Democrats retake control of the Senate. Once in office, Biden could slow the review process by probing the Trump administration’s decisions on the pipeline. He could also direct the Army Corps of Engineers to abandon the oil route.

The Obama administration, in which Biden served as vice president, blocked construction of the Dakota Access Pipeline in December 2016 after months of protests at which heavily militarized security forces attacked peaceful demonstrators.

Energy Transfer’s stock climbed nearly 5 percent on Wednesday afternoon following the ruling. But the price remains well below the nearly $26-per-share it hit before the first environmental review order was handed down in March.

The attorneys litigating the pipeline’s case, however, are almost certainly faring well.

“The court battle is strangely never-ending,” Barnes said. “It’s a virtuous circle for the lawyers.”