This story contains spoilers for The Good Place.

When aliens show up in fiction, the story usually reflects more about the state of life on Earth than anything else. During the Cold War, space invaders from Mars always seemed like stand-ins for Soviets and Commies. In more recent times, the blue-skinned aliens of 2009’s Avatar live in harmony with nature, serving as a foil to the humans pillaging the planet.

In much the same way, The Good Place, an NBC sitcom set in the afterlife, poses serious questions about life on Earth rather than a speculative life after death. Written by Michael Schur, the comedy writer behind The Office and Parks and Recreation, the show considers the moral problems that befuddle the living from the vantage point of the dead.

There’s never been anything like the series on network TV, which airs its final episode on January 30. Has a philosopher ever played a lead role in an American sitcom? One of the main characters is Chidi Anagonye (played by William Jackson Harper), a moral philosopher from Nigeria occasionally called “Professor Stomachache” in reference to his crushing anxiety and indecision.

“I know why I’m here,” Chidi says in the show’s fourth and final season, realizing yet again that he’s been fooled: He’s not in the Good Place (heaven-ish), but rather the Bad Place (hell without much fire). “Almond milk. I drank sooo much of it despite the negative environmental impacts.”

Chidi’s fate in the afterlife isn’t determined by what milk he drank — or even by his tendency to torture his friends by laboring over the ethics of every single decision. Everybody’s fate is determined by a point system, a scorecard that assigns a numerical value to people’s decisions over the course of their lives. And it’s out of balance, because all humans wind up condemned to an eternity of torture. The real root of our problems isn’t us, at least not in any simple way — it’s the political and economic systems that leave us with no good options. Sound familiar?

Michael (played by Ted Danson), is a demon-turned-good-guy who decides he’s going to make the point system fair. After a trip to the afterlife’s Accounting Department (which looks just as bland as it sounds), he discovers the system’s central flaw. As the world becomes increasingly complex, the consequences of our actions are obscured by a veil of mystery. An innocent glass of almond milk reveals nothing about the water-guzzling properties of almond cultivation. But drinking it still shows up as a net negative on Chidi’s scorecard (as would dairy milk, soy milk, and — sorry! — probably even oat milk.)

“Life now is so complicated, it’s impossible for anyone to be good enough for the Good Place,” Michael explains to the Judge (Maya Rudolph), the Netflix-binging god of the afterlife. “These days, just buying a tomato at a grocery store means that you are unwittingly supporting toxic pesticides, exploiting labor, contributing to global warming. Humans think that they’re making one choice, but they’re actually making dozens of choices they don’t even know they’re making!”

In other words, life presents a buffet of bad options. Those striving to do the right thing can be thwarted when the prevailing winds blow them in the wrong direction. Take NBC’s “Climate Confessions” project, which invites people to share their climate sins anonymously. “Even those who care deeply about the planet’s future can slip up now and then,” the site says. “Tell us: Where do you fall short in preventing climate change? Do you blast the A/C? Throw out half your lunch? Grill a steak every week?”

The responses are teeming with guilt about paper towels and plastic bags. But a number of them punt the blame to city infrastructure, corporations, and the food system. “Used to ride my bike until I almost got killed by a guy in an SUV,” one person wrote. “Amazon delivers one order of multiple items in separate packages instead of one,” noted another. A third explained a meat-eating habit by pointing out that “really good veggies are hard to find and expensive.”

These dilemmas are unavoidable, according to Roger Gottlieb, a real-life philosophy professor at Worcester Polytechnic Institute. “Morally, we are caught in a system we did not design, faced with unpleasant choices we would rather skip over, torn between wanting a little more ease and a nagging conscience that suggests that such ease is not worth the moral cost, and sometimes compelled to choose what we would think is the least bad of two distressing alternatives,” he writes in the book Morality and the Environmental Crisis.

This plays out in the second season of The Good Place, when our spunky protagonist, Eleanor Shellstrop (Kristen Bell), gets a second chance at life on Earth as part of a grand experiment to see if humans can self-improve. She’s saved from the accident in a grocery store parking lot that killed her the first time out. Shaken from the experience, Eleanor reconsiders her life as a world-class jerk, quits her job at a sham pharmaceutical company, and apologizes for being rude to an environmentalist. Then she joins his group, the “Clean Energy Crusaders,” and spends half a year campaigning for the environment, eating less meat, and trying to be a better person.

In return, Eleanor’s friends make fun of her for trying to go vegetarian. And then her morale cracks. “I’ve been nothing but good for, like, six months, and all I have to show for it is this crummy apartment, a lawsuit, a loose caboose, and an overdrawn bank account,” Eleanor says. “Being good is for suckers.”

As Eleanor discovered, not only do environmentalists get few immediate benefits for doing the right thing, but in the real world, they also get flak when they fail to live up to the high standards others set for them. When regular Americans drive an SUV, eat a hamburger, or throw a plastic bottle in the trash, it’s considered mundane; when environmentalists do the same things, they’re called hypocrites. The same goes for flying. When Vermont Senator Bernie Sanders, a presidential candidate with an ambitious climate plan, took a private jet to get back in time for President Trump’s impeachment trial, the right-wing press took it as an opportunity to question his morals.

Other people who fly are just … people who fly. What if that same level of criticism was aimed at the policies that prioritize freight travel over passenger trains like Amtrak? Where are all the articles assessing the moral character of the politicians who have failed to approve high-speed rail projects?

That said, it’s true that thousands of small decisions can add up to force economy-wide changes. That’s how market economies work: Witness what happened when bajillions of small purchases shifted from small stores to Amazon. To a much lesser extent, the spread of “flight-shame” is already changing travel habits in Germany and Sweden, where people are beginning to take fewer domestic flights. But recent research suggests that guilting your friends into ditching plastic straws and bringing cloth bags to the grocery store might backfire. A 2017 study found that emphasizing individual solutions, like cutting down on energy use at home, reduced people’s support for wide-scale efforts like a carbon tax, since they felt like they’d already done enough for the environment. 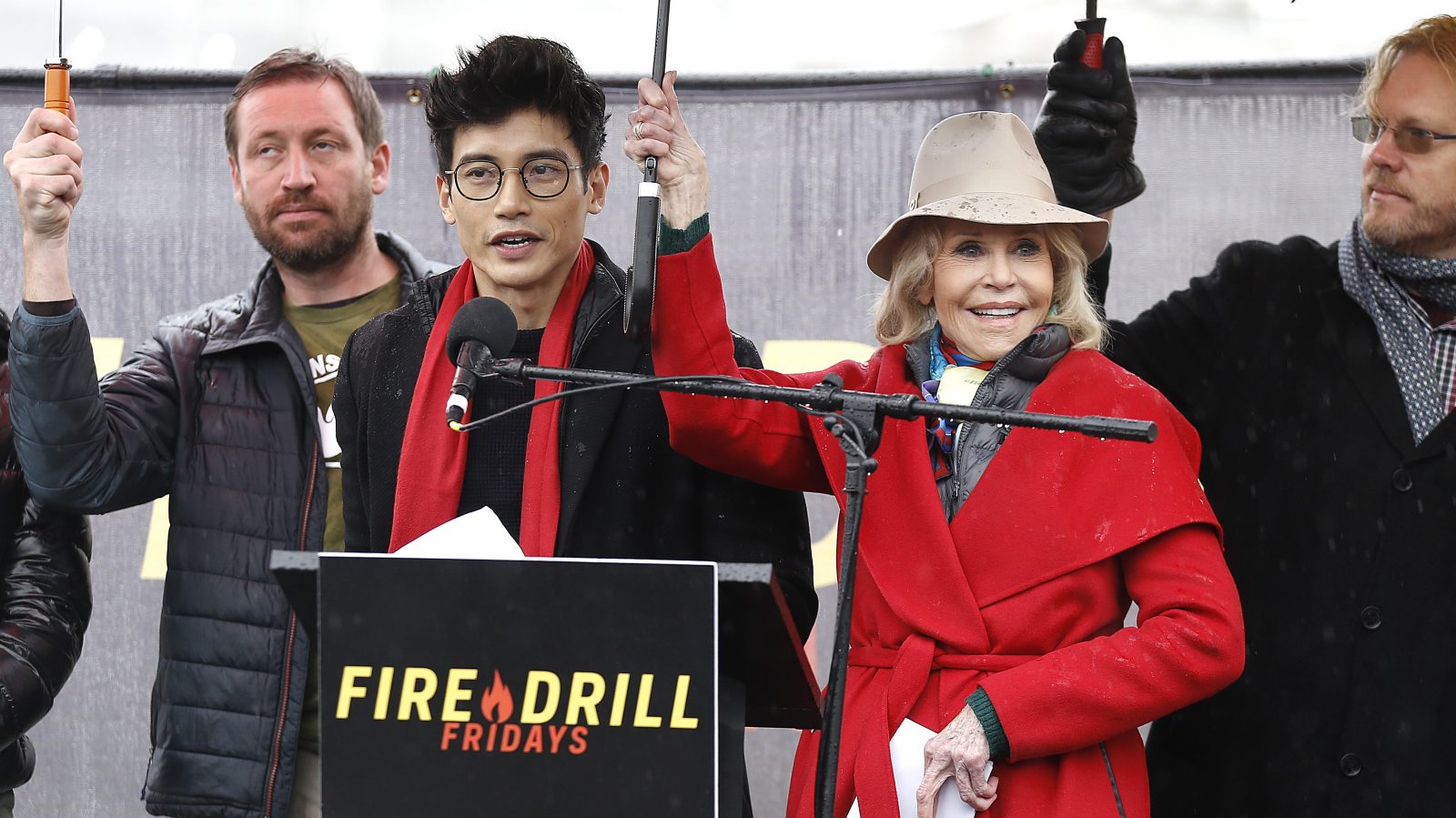 The fossil fuel industry has embraced the story that individuals, all those folks filling up their cars at the gas station, are to blame for climate change, rather than the company selling the fuel. “The first step to reducing your emissions is to know where you stand,” BP tweeted last October. “Find out your #carbonfootprint with our new calculator & share your pledge today!” Oil companies have wielded this narrative to absolve themselves of blame in court cases, even though one study found that 100 big companies were responsible for 71 percent of emissions since 1988. The upshot is that while you and I are busy agonizing over how to make more thoughtful decisions, corporations can trash the world without facing serious consequences.

Coincidentally or not, some of The Good Place actors are calling this dynamic into question. Danson has been arrested for participating in Jane Fonda’s weekly protests of the climate crisis, and Manny Jacinto (who plays everyone’s favorite Florida Man, Jason Mendoza) has joined in, too. “Climate deniers are attempting to deflect our attention,” Jacinto said in a speech at a protest in November. “Rather than finding policy solutions, they’re highlighting the need for our individual changes … We cannot be taken in by this deflection campaign and must push for policy reform.”

The Good Place also highlights the importance of acting with urgency. The alternative? Deliberating for so long that nothing ever gets accomplished. While the angels on the Good Place Committee are pondering how to fix the point system, they decide to form a committee to investigate and fast-track the process to be completed in 400 years (plus another thousand or so to cross-examine themselves). During that deliberation period, billions of Earthlings would be sent to the Bad Place for eternal damnation.

“The Titanic is sinking and they’re writing a strongly worded letter to the iceberg,” Michael says. It’s a neat metaphor for the climate crisis.

“You say children shouldn’t worry,” Greta Thunberg, the 17-year-old Swedish climate activist, told the assembled leaders in a chilling speech at the World Economic Forum in Davos, Switzerland, last week. “You say: ‘Just leave this to us. We will fix this, we promise we won’t let you down. Don’t be so pessimistic.’ And then, nothing. Silence. Or something worse than silence. Empty words and promises which give the impression that sufficient action is being taken.”

Afterlife time on The Good Place is nonlinear; it loops back on itself in a pattern that resembles the name Jeremy Bearimy written out in cursive. Here on Earth, we don’t have the luxury of do-overs — time’s arrow points straight ahead.