How can we see the impact of rising ocean temperatures? For the residents of Townsville, a vibrant city on Queensland’s coast, a new public artwork just off their shores reminds them each day of the challenges facing Australia’s Great Barrier Reef.

The enormously biodiverse reef, named a World Heritage Site in 1981, is unlike anywhere else on the planet — a serious drawcard for scientists, tourists, and divers, who flock to Australia for a chance to experience the world’s largest coral reef formation. But in recent years their flocking has taken on a new urgency. The Great Barrier Reef’s health — like that of coral reefs everywhere — is at risk from rising ocean temperatures, pollution, and coastal development.

When coral gets stressed by temperature fluctuations or sediment deposits, it can change from a vibrant-hued wonder to a sad white shade. Known as coral bleaching, this phenomenon was first recorded on the Great Barrier Reef on a massive scale in 1998 — which also happened to be the hottest summer in a century. It can take decades for coral to recover from this kind of bleaching (if it does at all).

But how to raise awareness of something that can’t be seen above water? Enter the “Ocean Siren.” 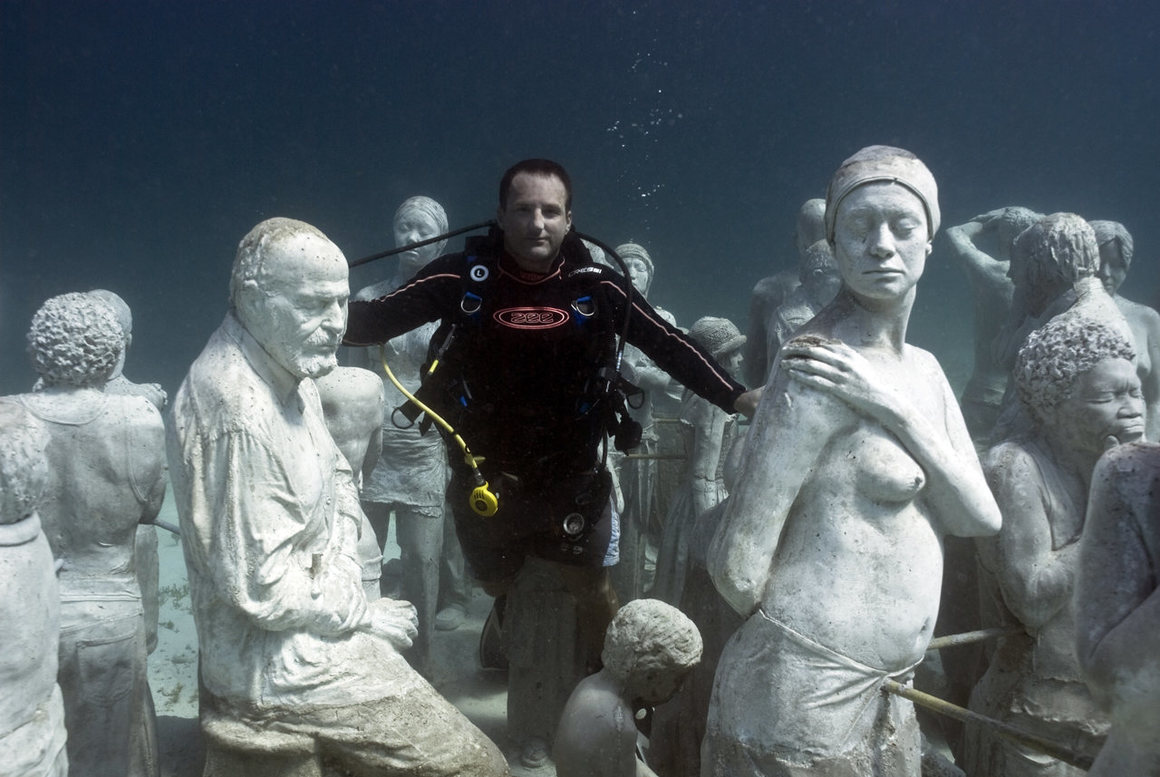 Unveiled in late 2019 off Townsville’s Strand Jetty, the “Ocean Siren” sculpture changes color, reacting to the fluctuating water temperature on the Great Barrier Reef in real time. Made of welded plate stainless steel and translucent acrylic, it contains 202 internal LED lights that change color as the water heats up or cools down. Visitors can see it go from a dark blue to a lighter hue, then to yellow, orange, and finally a dark red — a distinct warning that the reef is in danger. Now.

The sculpture — modeled on local Wulgurukaba descendent and student Takoda Johnson — is the first installation of Queensland’s new Museum of Underwater Art (MOUA). It’s also the only part of the museum that’s visible above the surface. The MOUA’s other three sculpture gardens — featuring artworks made of nontoxic, pH-neutral marine-grade cement — are all anchored underwater.

Created by underwater sculptor and conservationist Jason deCaires Taylor and the Queensland government, it’s the first — and only — underwater art museum in the Southern Hemisphere.

To learn more about the sculpture and the nonprofit art museum — and to find out how one becomes an underwater sculptor — Atlas Obscura recently spoke with Taylor. 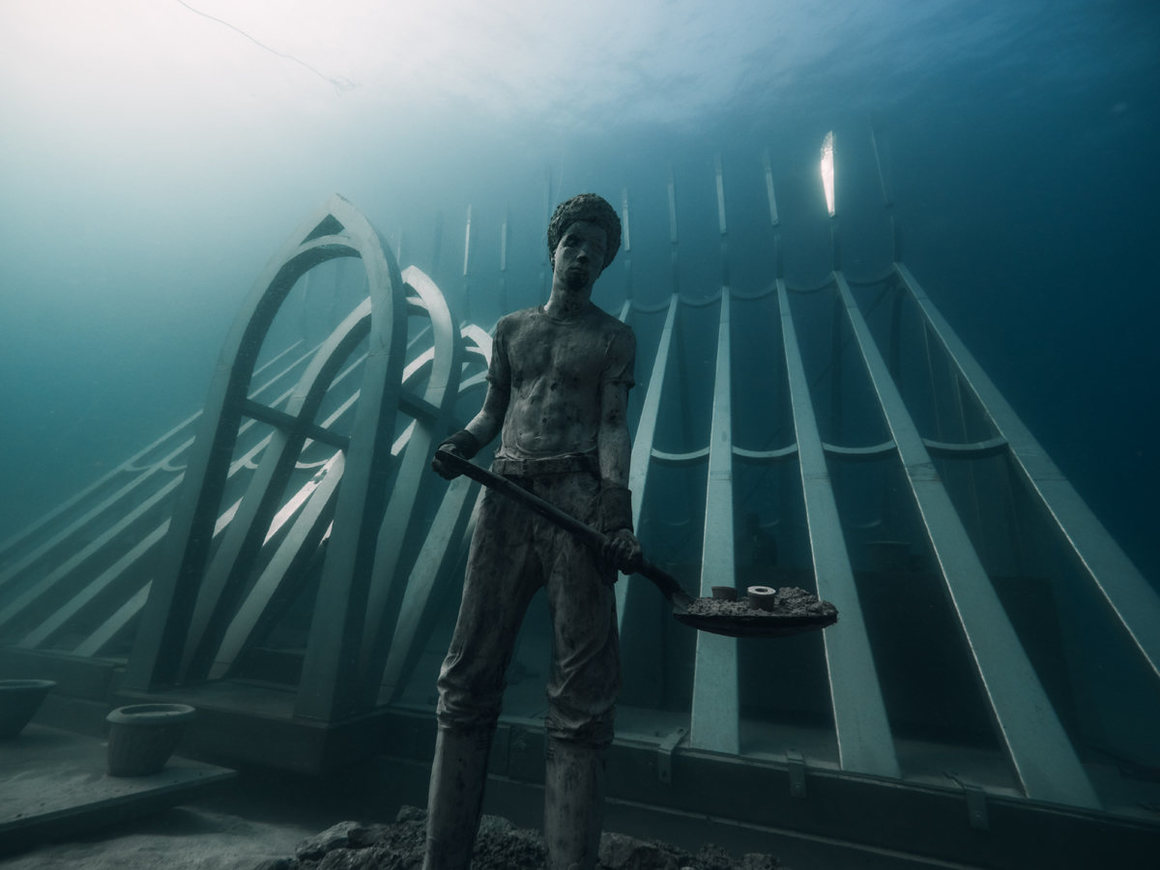 Q. How did you get involved in underwater sculpture?

A. I trained as a sculptor many years ago, and I used to work on public projects … I’d build a big exhibition, and then at the end of it, I’d have to pack it away, and store it. It all just seemed so wasteful, and it felt like it needed another reason to exist.

So when I realized that if I started working underwater, [my sculptures] would have this … secondary benefit of also creating a reef and encouraging marine life to inhabit them. I started around 2006. I think I’m approaching almost a thousand [underwater installations].

I [also] love the idea that these sculptures aren’t static. [They are] completely evolving, changing. And ultimately, nature is one of the best artists in the world.

Q.Can you explain how the concept for the “Ocean Siren” came about?

A. I think part of what’s happening in our underwater world is that it’s sort of forgotten and misunderstood. If we saw a forest that was on fire, degrading, I think we would be very quick to act. It would be right at the forefront of our minds. Whereas underwater, it’s out of sight and slightly forgotten … Yet major changes are happening [down there], and major ecosystems are being lost.

So I wanted to bring that threat right in front of our faces … and to convey in real time what’s happening. 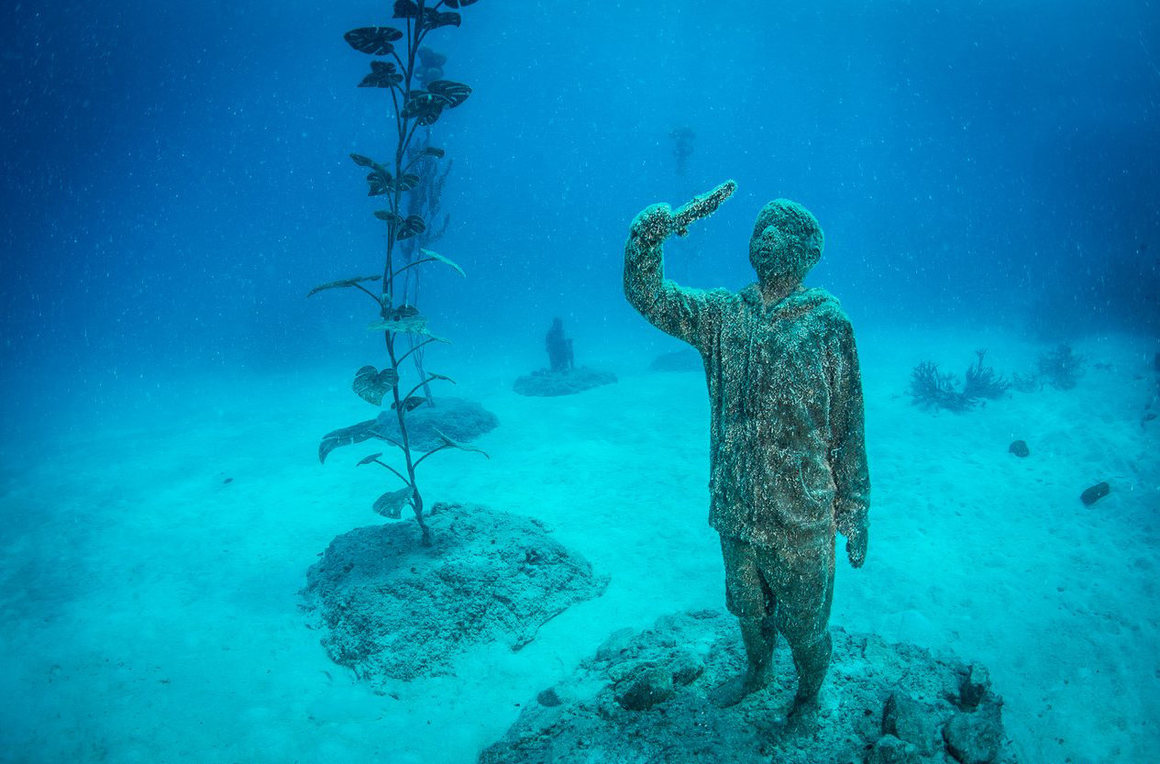 The “Ocean Siren” is the only sculpture visible above the surface. The other installations—including this one—are made of marine-grade concrete and anchored to the seabed. Matt Curnock / Museum of Underwater Art

Q.What was it about Townsville that made it the perfect spot for the installation?

A. Townsville’s probably the marine science capital of the world. It has two huge marine institutions there: James Cook University and the Australian Institute of Marine Science. It’s a great launchpad to the Great Barrier Reef.

Q.You worked with local student Takoda Johnson on the project, and used her as the model for the sculpture. What did you learn from working with her?

A. I was really fortunate to be able to find someone like her, who was willing to be part of the project, and she was wonderful.

I think she added a whole extra layer of connection to [the] place. [Her statue] looks out over the Great Barrier Reef, but she also looks out on Magnetic Island, which is where her great-grandfather is from. It really gave [the project] a personal connection, and a very important connection to indigenous lands rights. 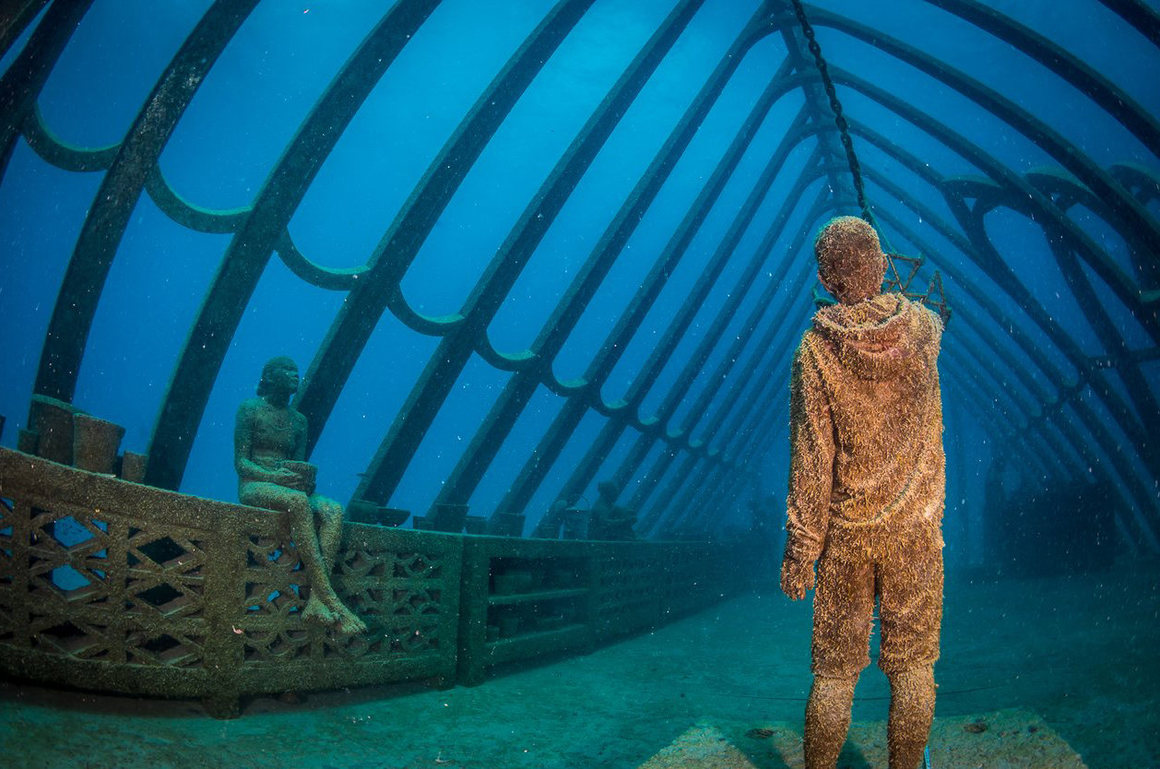 Q.There are so many pressing environmental concerns for our planet at the moment. What role do you see art playing in raising awareness of these issues moving forward?

A. I think facts and figures are not enough to engage people. I think we’ve seen that around the world in many, many different things. Artists play such a vital role [in] conveying science [as] something that’s emotive.

There’s a very famous quote by [an environmentalist who] sort of said, “I used to think that the world’s problems were habitat loss, global warming, and species destruction.” And then he goes, “But then I realized that no — the greatest problems of the world are greed, apathy, and denial.”

People could walk past [the “Ocean Siren” sculpture] and instantly know what’s happening out [in the water]. The temperature logger for that piece is right out on Davies Reef, which is, I think, 50 kilometers [about 30 miles] away.

I quite like that direct connection to the underwater world.

Q.What do you hope visitors, after seeing the “Ocean Siren,” will take away from their experience?

A. Ultimately, I just want to convey that everything is connected. We’re all one big organism that is cyclical. I hope people [understand that] … what happens in the sea affects us directly, and affects our livelihoods, and the future of our species.

And I think [one] of the best ways to inspire people is to show them how incredible it is — and how important it is to continue to conserve it.

This interview has been edited and condensed for length and clarity.