Why massive Saharan dust plumes are blowing into the US 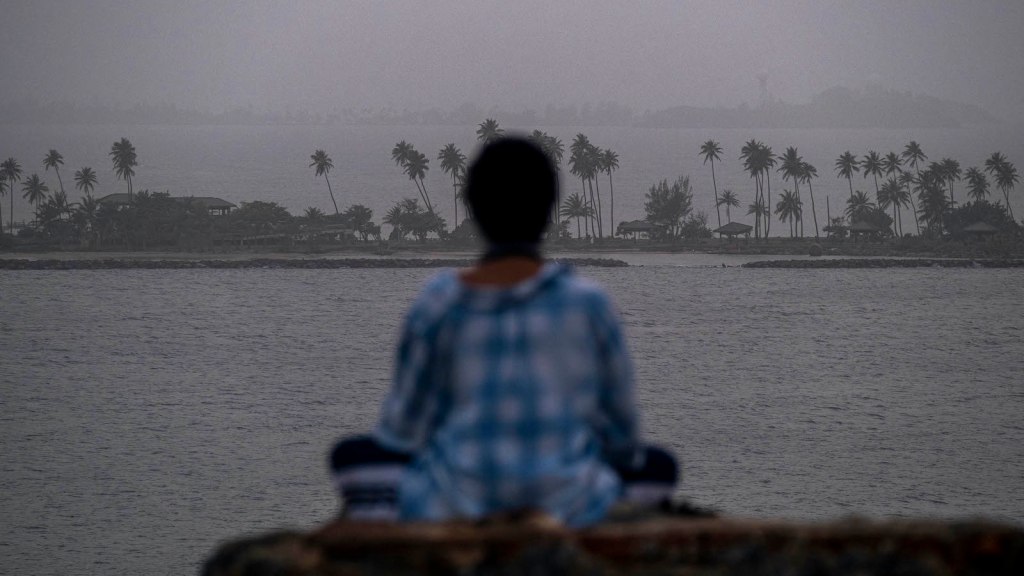 Why massive Saharan dust plumes are blowing into the US

The pandemic is still raging, the Arctic is burning up, and microplastics are polluting every corner of the Earth, but do try to take a deep breath. Actually, belay that, especially if you live in the southern United States. A plume of dust thousands of miles long has blown from the Sahara across the Atlantic, suffocating Puerto Rico in a haze before continuing across the Gulf of Mexico. Yesterday, it arrived in Texas and Louisiana.

It’s normal for Saharan dust to blow into the Americas — in fact, the phosphorus it carries is a reliable fertilizer of the Amazon rainforest. The dust makes the journey year after year, starting around mid-June and tapering off around mid-August. The good news is, the dust plumes can deflate newly forming hurricanes they might encounter on the way over. But the bad news is that dust is a respiratory irritant, and we could use fewer of those during the COVID-19 pandemic. Also, the current plume is particularly dense, and it’s not alone: The African desert is now releasing another that’s working its way across the Atlantic and will arrive in a few days. Still more could be on the way as the summer goes on.

En route to the continental United States, the plume struck Puerto Rico on Saturday, cutting visibility down to 3 miles. It’s the worst Saharan dust event the island has seen in 15, maybe 20 years, says Olga Mayol-Bracero, an atmospheric chemist at the University of Puerto Rico. Her air-analyzing instruments were working in real time, detecting the component elements of the desert dust. “We were quite surprised, seeing such high values for all these different parameters — we had never seen that,” Mayol-Bracero says. “So it was quite shocking.”

How does Saharan dust make it all the way across an ocean? It’s a lesson in atmospheric science.

Because it’s a desert, the Sahara is loaded with particulate matter, from coarse sand down to the tiniest of dirt specks, none of which is very well anchored to the ground. By contrast, the lush rainforests to the south of the Sahara have trees that both block the wind and hold on to the soil with their roots, keeping all the muck from taking to the air. The conflict between these two atmospheric regions is what births the plumes that blow clear across the Atlantic.

The dust plume arrived in the Caribbean a few days after it left Africa. VIDEO: CSU/CIRA/NOAA

The Sahara is notoriously dry and hot. But down south, around the Gulf of Guinea, it’s much cooler and wetter, on account of its proximity to the equator. “The setup between those two — the hot to the north and the cool, moist to the south — sets up a wind circulation that can become very strong, and it can actually scour the surface of the desert,” says Steven Miller, deputy director of the Cooperative Institute for Research in the Atmosphere at Colorado State University, which is monitoring the plumes. (You can watch the dust’s progress from a satellite with this neat tool. Look for the gray clouds on the map.)

At the same time, a mile above the desert a 2-mile-thick mass of hot, dry air called the Saharan Air Layer, or SAL, has formed. This happens reliably every summer, blowing east toward the Americas. The process creates “pulses” of warm, dry, dusty air traveling along the SAL that cycle every three to five days, says Miller. So if you take a look at the GIF below, you can see the first plume that’s reached the southern US, and the new plume currently kicking off from the Sahara. Each plume takes about three days to cross the ocean.

Here you can see one plume moving through the Caribbean, while another leaves Africa. VIDEO: CSU/CIRA/NOAA

Looking at these images, you might notice that the plumes are traveling suspiciously like hurricanes do across the Atlantic — and, indeed, this is where things get extra interesting. The SAL is about 50 percent drier than the surrounding air, and 5 to 10 degrees Celsius hotter, and it’s unloading plume after plume. “When that kicks into high gear, and you’ve got these pulses after pulses of really strong Saharan air, that’s what kind of inhibits the tropical storm formation, which forms in these easterly winds as well,” says Miller. In other words, these dust plumes actually counteract the generation of hurricanes.

That’s also because of the contrast between wetter air and drier air. Tropical storms derive their energy from wet air. “When you get dry air mixing in, it can weaken the storm, and it creates these downdrafts and inhibits the convection that starts to get organized to create hurricanes,” Miller says.

Think of this convection like boiling a pot of water. At the bottom of the pot, the water gets much hotter than the water at the surface, which is in contact with the air. This contrast creates convection — boil some rice and you’ll notice that the grains cycle between the top and the bottom of the pot. “But if you have the opposite situation set up, where you have the warm water above cool water, then it’s what we call a stable situation — there’s no mixing that happens,” says Miller. Warm air, after all, wants to rise, and cold air wants to sink. “When you have the Saharan Air Layer moving across, it’s kind of like that. You’ve got this warmer air moving across the Atlantic Ocean, which is a cooler ocean surface. You have this cool air underneath warm air, and then the atmosphere in that case is very stable.”

It doesn’t help matters for any budding hurricanes that the dust in the SAL is absorbing heat from the sun as it travels across the Atlantic, creating still more atmospheric stability. Even worse for hurricanes, they need a calm environment in order to start spinning, but the SAL is barrelling in with 50-mile-per-hour winds. “It tilts and it bends the tropical cyclone vortex as you go up in height, and it decouples and disrupts the storm’s internal ‘heat engine,’ as we call it,” says Miller. “What the storm wants is just a nice vertically aligned vortex so it can transfer heat and moisture from the surface upward and out.”

Forecast models can predict where the dust might land in the Americas, just like scientists would do with an approaching hurricane. Miller reckons that the plume currently working through the southern United States could eventually make it to him in Colorado, albeit in a diminished form. That’s because of gravity: As the plume makes its way across the Atlantic, the larger particles fall out first, leaving the smaller particles to make landfall.

Air sampling stations throughout the US gather this particulate material for scientists to study. “What we typically see is that the concentrations are highest in the southeast, more toward Florida,” says Jenny Hand, senior research scientist at the Cooperative Institute for Research in the Atmosphere. “And as it moves farther north, the concentrations will go down, just as it sort of settles out, diffuses, and gets moved around. But we do see those impacts up into the Ohio River Valley pretty regularly in our data.”

So what does that mean for respiratory health, especially with COVID-19 being a respiratory disease? “Yeah, it’s not good,” says Hand. “Especially now.”

When you inhale dust, it travels deep into your lungs, triggering an inflammatory immune response. If your lungs are healthy, maybe this will manifest as a mild cough. “But for others who have chronic inflammatory lung conditions, such as asthma or emphysema, this extra burden of inflammation can tip them over into severe breathing trouble,” says W. Graham Carlos of the Indiana University School of Medicine and Eskenazi Health. “We know, for example, that in many parts of the world that are afflicted with sand and dust storm events, such as the Middle East, we see more asthma and asthma attacks.” He advises that people with respiratory conditions stay indoors until the plume passes. If you have to go outside, he says, wear an N95 mask: “That type of mask filters those fine particles, fine enough to travel in the air across the Atlantic Ocean.”

Carlos adds that researchers can’t yet say whether inhaling the Saharan dust might predispose people to contracting COVID-19 or make the illness worse. “I would caution, though, that COVID is also an inflammatory condition in the lungs, and that’s in fact why people are needing ventilators and hospitals are surging,” he says. “So this could add insult to injury. In other words, you might have a low-grade inflammatory condition from the dust plume, and then if you were to get COVID on top of that, it may be worse.”

As the weather cools in Africa starting in mid-August, that temperature differential between the desert and the forests to the south will weaken, zapping the SAL conveyor belt. The dust clouds will stop rolling across the Atlantic. Then we can all go back to just worrying about COVID-19 and microplastics and a melting Arctic.