Will 2021 be the year New York finally breaks ground on its clean energy promises? 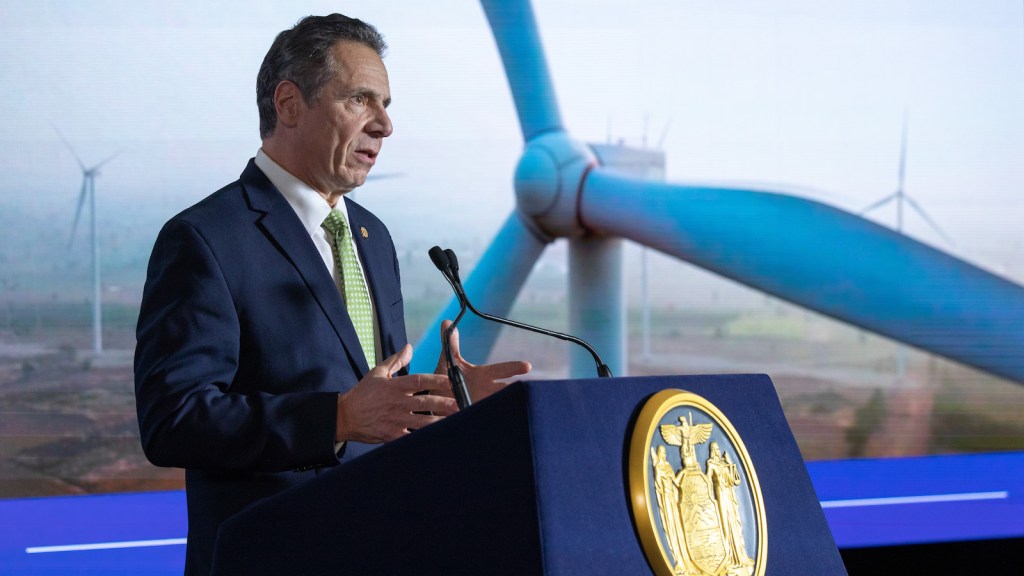 Will 2021 be the year New York finally breaks ground on its clean energy promises?

New York Governor Andrew Cuomo pledged to close the gap between rhetoric and reality when it comes to the state’s climate targets on Wednesday, announcing a slew of new clean energy projects during his annual State of the State address.

“As the world economy resets,” Cuomo said, “there’s an opportunity to raise our efforts to the next level, and New York should seize this moment.”

In 2019, New York state passed the Climate Leadership and Community Protection Act, which requires the state to reduce net emissions to zero across the entire economy by 2050. The law also requires 70 percent of the state’s electricity to come from renewable sources by 2030, with at least 9,000 megawatts from offshore wind and 6,000 megawatts from solar.

Progress has been slow. Wind and solar energy currently only make up about 5 percent of New York’s electricity mix. The state’s process for siting and permitting large-scale renewable energy projects can take between five and 10 years, a problem it’s trying to address with a new, more streamlined process. There’s also not currently enough capacity on the state’s transmission lines to handle all of that new clean energy once it gets built.

Cuomo laid out a four-pronged strategy to pick up the pace while creating thousands of jobs and investing billions in the economy through public-private partnerships. The first component is simply to get more renewable energy projects in the pipeline. The state will contract with private companies to start developing 23 new solar farms and a new hydroelectric facility this year. It will also partner with offshore wind giant Equinor to develop two offshore wind farms, adding to the three projects that are already underway, bringing the state’s total offshore wind procurement to more than 4,300 megawatts, or enough to power more than 2.4 million homes.

Next, Cuomo elaborated on his plans to make New York a wind manufacturing powerhouse, announcing the development of a facility in Albany to build the towers for wind turbines and an offshore wind turbine staging facility and operations and maintenance hub at the South Brooklyn Marine Terminal in the New York City neighborhood of Sunset Park.

Uprose, a Brooklyn-based grassroots environmental justice organization that has long advocated for the state to use the industrial waterfront in Sunset Park as a hub for clean energy, celebrated the news. “This is a climate justice victory — this is what the industrial waterfront of the future looks like,” said Elizabeth Yeampierre, executive director of Uprose, in a statement.

The new wind hubs up the ante in the offshore wind arms race between New York and its neighbor New Jersey, which has also declared plans to build the first major wind hub on the East Coast. The office of New Jersey Governor Phil Murphy did not respond to a request for comment by the time of publication.

The third leg in Cuomo’s strategy is to train a green energy workforce, and he announced plans to create a new Offshore Wind Training Institute at the State University of New York that will begin training at least 2,500 New Yorkers beginning this summer. He also highlighted the state’s efforts to train 14,000 workers to electrify approximately 130,000 buildings in the state, replacing fossil fuel-based heating appliances with electric heat pumps.

Finally, Cuomo highlighted the physical gap between the rural areas upstate where real estate to build renewable energy is available and the high-demand region around New York City. The state is issuing a request for proposals to build new transmission lines to bridge that gap, a plan that was authorized last year and could be used to subsidize a decade-old venture that would allow NYC to access Canadian hydropower. Cuomo also promised that several other transmission projects that have been in the works for years will finally get shovels in the ground in 2021.

In an interview with Grist, Anne Reynolds, executive director of the advocacy coalition Alliance for Clean Energy New York, said she was happy to see the governor talk about transmission. “We’re trying to get the word out that transmission is an environmental issue,” said Reynolds. “We need this transmission in order to get renewables built.” She also applauded Cuomo’s focus on construction. “If we can really cut some ribbons and get people to work, then we can show the country that we’re serious about creating jobs and creating clean power.”

But some clean energy advocates were not impressed with the news. Peter Sikora, climate and inequality campaigns director for the nonprofit New York Communities for Change, pointed out that despite Cuomo’s clean energy promises, there are three proposed natural gas power plants currently going through the state’s permitting process. Until Cuomo halts new fossil fuel infrastructure, there will be a large gap between the governor’s rhetoric and climate action in New York, Sikora said.