With the world on fire, climate fiction no longer looks like fantasy 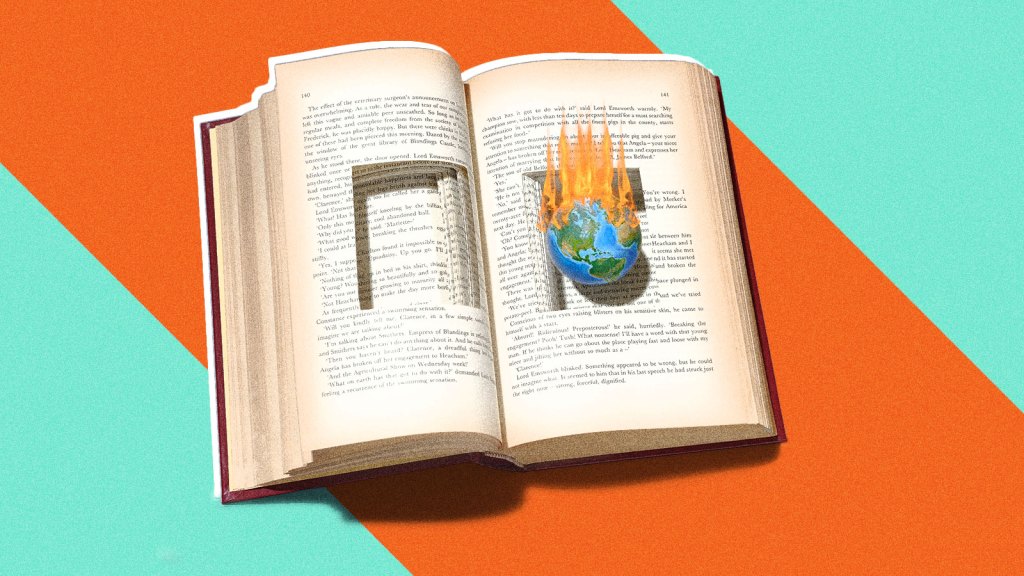 With the world on fire, climate fiction no longer looks like fantasy

The tops of houses poke above the waves. The desert has crept into fields, turning corn dry and brittle. Firestorms ravage entire towns, turning homes into charred, ashy remains.

You don’t have to read a novel to picture what climate change looks like anymore — you only have to read the news. But there’s new evidence that reading fiction about our overheating planet might make it feel more real, sort of like how watching a horror movie makes you scared of the basement for a while.

Authors have been imagining what a warmer world would look like ever since climate scientists first made their concerns about greenhouse gases known. But in recent years, climate fiction, or “cli-fi,” has really exploded. With contributions from celebrated authors like Margaret Atwood, Barbara Kingsolver, Amitav Ghosh, Cormac McCarthy, and Kim Stanley Robinson, it has left the realm of sci-fi, a reflection of how climate change has moved from speculation to touch every facet of our lives.

“I think we’re close to the point where literature that doesn’t include climate change, in some way, shape, or form, just isn’t reflecting the reality that we inhabit,” said Matthew Schneider-Mayerson, an assistant professor of social sciences at Yale-NUS College in Singapore.

A first-of-its-kind experiment published last month found that reading a short story about climate change makes people more worried about the crisis — even if the effect doesn’t last long. The study, led by Schneider-Mayerson, surveyed Americans who were interested in reading fiction and moderately concerned about the climate crisis. In the experiment, participants read short stories online and were then subjected to questions about climate change.

Some read Helen Simpson’s “In-Flight Entertainment,” a realistic depiction of a conversation between a rich businessman and a former climate scientist on an airplane. Others read Paolo Bacigalupi’s “The Tamarisk Hunter,” a fable set in a future Southwest U.S. that has transformed into a drought-stricken dystopia. A third short story didn’t touch on the environment, so the researchers had something neutral to judge against.

Although the two tales of climate change were very different stories, they produced similar results. Readers said they were immediately more worried about how the crisis would affect their own lives and the lives of future generations.

After one month, however, researchers found that their elevated concern had faded. That result isn’t quite as discouraging as it sounds, according to Schneider-Mayerson. “I mean, you wouldn’t expect that reading a short 20-page story would change your life forever,” he said.

In real life, people will more likely read a novel than a short story, or even a number of novels, he said, giving the message more time to sink in. Narratives can change our perspectives in a few keys ways: They transport us to fictional worlds, potentially making distant threats feel more visceral. They also put us in the shoes of the characters, generating empathy for their plight.

Novels that touch on climate change have been winning literary awards and appearing on bestseller lists. Richard Powers’ The Overstory, which follows the lives of people who choose to defend trees, won last year’s Pulitzer Prize for fiction. Lauren Groff’s Florida, a collection of short stories that explores climate change and the apocalypse, was a finalist for the 2018 National Book Award. And last month, Diane Cook’s book The New Wilderness — a tale of a mother-daughter relationship in a world wrecked by climate change — was named one of six books shortlisted for this year’s Booker Prize.

Older works of climate fiction are reaching new readers, too. Octavia Butler’s The Parable of the Sower, published in 1993, follows the life of a Black teenager in the firey, post-apocalypse California of the 2020s. It just made it on the New York Times bestseller list last month, accomplishing one of the science fiction author’s lifelong dreams.

Literature alone isn’t going to solve world problems, of course. (Too many headlines ask, “Can Books Save the Planet?”) But stories have a unique way of reaching people. They’re often more persuasive than facts.

And it’s not just that more authors are focusing on climate change — the hotter planet is simply becoming the backdrop for more stories, songs, and movies. The South Korean film Parasite, the winner of this year’s “Best Picture” award at the Oscars, isn’t a “climate movie” per se (it’s more about class), though the extreme rains that flood a poor neighborhood in Seoul play a pivotal role in the plot.

“These different forms of media — whether it’s journalism or fiction or film — they tend to have a compounding effect, and the messages tend to stick more through repeated exposure,” Schneider-Mayerson. In other words, hearing about climate change over and over could make people take the real-world threat more seriously.

In the near future, Schneider-Mayerson said, we may get to the point that any story that doesn’t touch on climate change might as well be considered either historical fiction or other-worldly fantasy.