There is a lot to be cynical about when it comes to a buddy-travel climate-awareness documentary series starring the actor Zac Efron and his “health guru,” Darin Olien. Neither of these characters are men I would trust to inform me about climate solutions, or really anything at all aside from how to improve my plank form, which is frankly impossible to improve upon, so never mind. But their authority is not really the point of the new Netflix show Down to Earth, thank God; we are following these two bros, the Elder Bro and the Younger Bro, as they learn about the different ways in which people all over are attempting to be more resilient against climate change.

When I say “I love bros” — which I do, regularly, throughout the day — what I mean is that I truly appreciate the platonic ideal of bro, unpretentious, unendingly curious about the world, and unapologetically committed to building musculature at every opportunity. A show centered around this rare archetype, embodied by the RVCA-clad recovering teen idol Zachary David Alexander Efron, learning about climate adaptation and mitigation — it’s just like, is God finally listening to me?

A quick background on Efron, if you’re unfamiliar: His rather confusing oeuvre includes High School Musical, Baywatch (for which, we learn at one point in Down to Earth, he did not approach a single carbohydrate for six months), the Netflix Ted Bundy biopic in which he stars as a hotter version of the serial killer, and, of late, a YouTube series where he and his brother attempt different feats of strength.

But let us talk about Efron’s Elder Bro spirit guide. Olien, who has lesser name recognition but ostensibly more “sustainability” clout, boasts on his resume the invention of Shakeology, a protein shake you might recognize from the Facebook videos of women you knew in high school as part of the multilevel marketing scheme Beachbody; an expertise in “superfood hunting” that culminated in his publication of SuperLife: The 5 Simple Fixes That Will Make You Healthy, Fit and Eternally Awesome, and a podcast and app about wellness (which is how Efron discovered him). 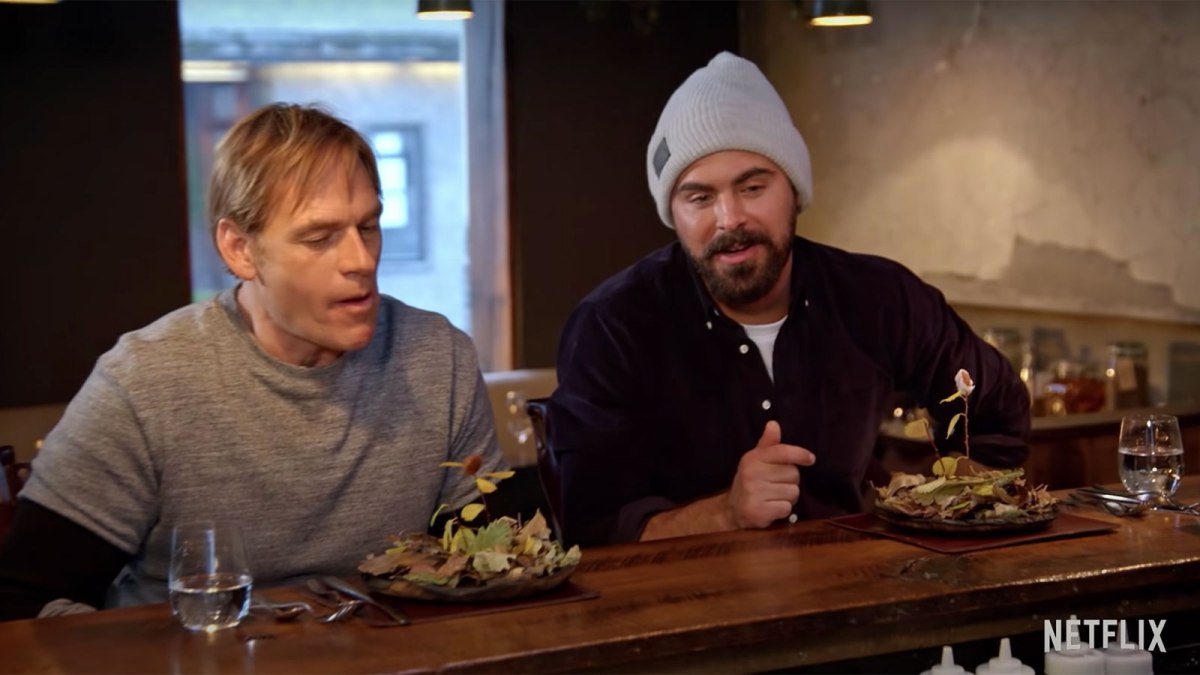 With those credentials, I guess I blame Olien for episode conceits so incredibly far afield of the proverbial point — if the point is to do anything remotely meaningful to address climate change — that watching the eight-part series, I found myself actually screaming wordlessly at the screen at regular intervals. “Sustainable,” as so often happens, gets too frequently confused with “natural.”

Low points include a visit to a Costa Rican eco-village populated entirely by linen-clad, well-moisturized expats. It is unclear what remotely useful climate lessons could be gleaned from this experience apart from “what if your lawn were food, bro?” There is a genuinely excruciating scene with the infamous “water sommelier” of Los Angeles — and the actress Anna Kendrick, for some reason. The prevailing lesson seems intended to be “We should know what goes into our water, because we need it to live” but is really much closer to the sommelier’s line: “You are the only people in the country who are able to drink this water right now.” The series finale attempts to connect a tour of medicinal plants in the Peruvian Amazon with Olien’s Malibu home burning down in the 2018 Woolsey Fire — both places are endangered by climate change, I guess?

The pilot episode, in Iceland, includes a lengthy and somewhat useful explanation of the value of hydro- and geothermal power, which supplies close to 100 percent of Iceland’s electricity, and how it compares to the United States’ own polluting energy sector. There is no discussion, however, of the limitations of comparing the energy needs of a country of 300 million people to one of 300,000. And there are infinite scenes in which Efron and Olien eat some high-gourmet plant concoction and pronounce it, “really, really good, bro,” accompanied by throaty groaning and bleeped-out expletives. 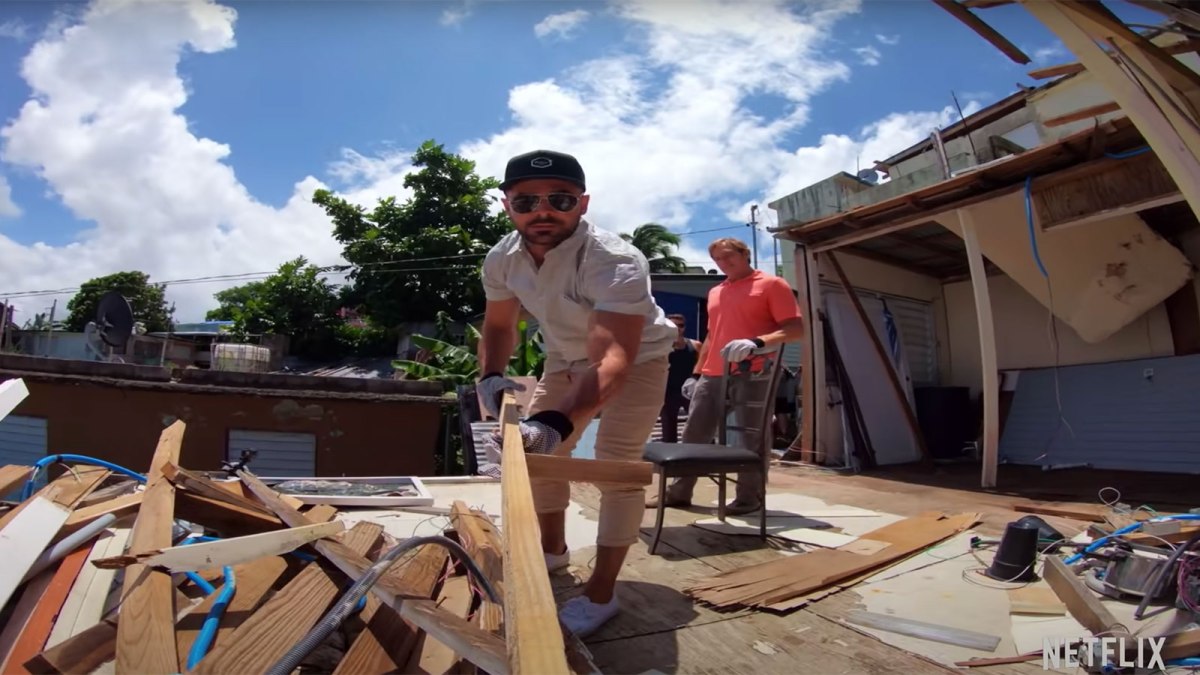 Zac Efron is really, really into his GoPro.

You have to grit your teeth through a lot of this kind of indulgence to get to, in my opinion, any worthwhile subject matter. By the latter half of the show, the introduction of relevant discussions about systemic change, food security, and resilience to extreme weather is so shocking that I actually texted my colleague Jesse Nichols late at night: “MAYDAY!!!!!! ZAC EFRON IS TALKING ABOUT CONGESTION PRICING!!!!” Including a reminder of the importance of voting! The Bros visit the International Potato Center in Peru to learn about how staple crops are being bred to be more drought- and heat-resistant, and all jokes aside, I would watch 100 straight hours of Zac Efron, wide-eyed, utterly captivated by a potato. The Bros also visit Puerto Rico, and Efron tours San Juan with embattled mayor Carmen Yulín Cruz to witness the devastation of hurricanes Irma and Maria. Again: I would watch 100 additional hours of Zac Efron volunteering to clear storm wreckage with his bare, bulging arms from Puerto Ricans’ homes. Maybe 150! It’s genuinely very touching.

The point that Down to Earth gets so close to but manages to miss, again and again, is that so many “sustainable” ways of life only work on a very small scale. There is a lot of denigration of “city life” and “dense, urban” areas, and a near-constant conflation of “healthy” and “environmentally sound.” Olien and Efron rhapsodize about the beauty of simplicity and “back to basics” at restaurants that charge $250 a plate. I actually can’t discuss the Costa Rican eco-village episode without an eye twitch, but suffice to say that — as far as I could tell — the only native Costa Ricans who appeared in the episode were the compound’s staff.

I have no idea who Down to Earth is intended to reach; I assume it’s supposed to win over people who are lukewarm on climate issues. But it succumbs to the same pitfall as so many other “climate awareness” campaigns, which is to joyously proclaim that climate mitigation and adaptation will create this wonderful new way of life that’s great for everybody! I guess there’s an increasingly small chance that that might be true. But it’s disingenuous bordering on grotesque to make that claim with zero discussion of the corruption and structural inequalities that make a “healthy, environmentally sustainable” life available to some and not others.

If I’m going to spend six hours of my life watching a bro — even the platonic ideal of bro — learn about climate change, I would like him to at least learn that.

This makeup ingredient could destroy 99% of ‘forever chemicals’