Ten years ago, electric cars were still a novelty. Spotting one in the wild offered a small thrill, a hopeful harbinger that the world could someday shed its reliance on fossil fuels. But the development of longer-lasting batteries gave buyers more confidence, sales jumped more than tenfold, and now, EV sightings have lost their safari-like wonder.

The era of EVs may have arrived, but the full potential of the technology has not. While it has become possible to drive from, say, New York City to Washington, D.C. on a single charge, the best Tesla on the market still takes at least an hour to fully recharge — nowhere near the five minutes it takes to pull up to a gas station for a refuel. A growing field of scientists think they can solve that problem, and many other energy storage challenges, with the help of very tiny particles, invisible to the naked eye, called nanomaterials.

The definition of a “nanomaterial” is contested, but is often considered to be anything that measures between 1 and 100 nanometers in length in at least one dimension. This is unimaginably small — the average human hair is about 75,000 nanometers thick. Scientists develop these materials from the bottom up by manipulating atoms and molecules, or from the top down by crushing or burning larger materials into much smaller bits. The ultimate product often looks like a powder, but if you viewed it under a powerful microscope, you’d see that the individual particles within the powder measure at the “nanoscale.” 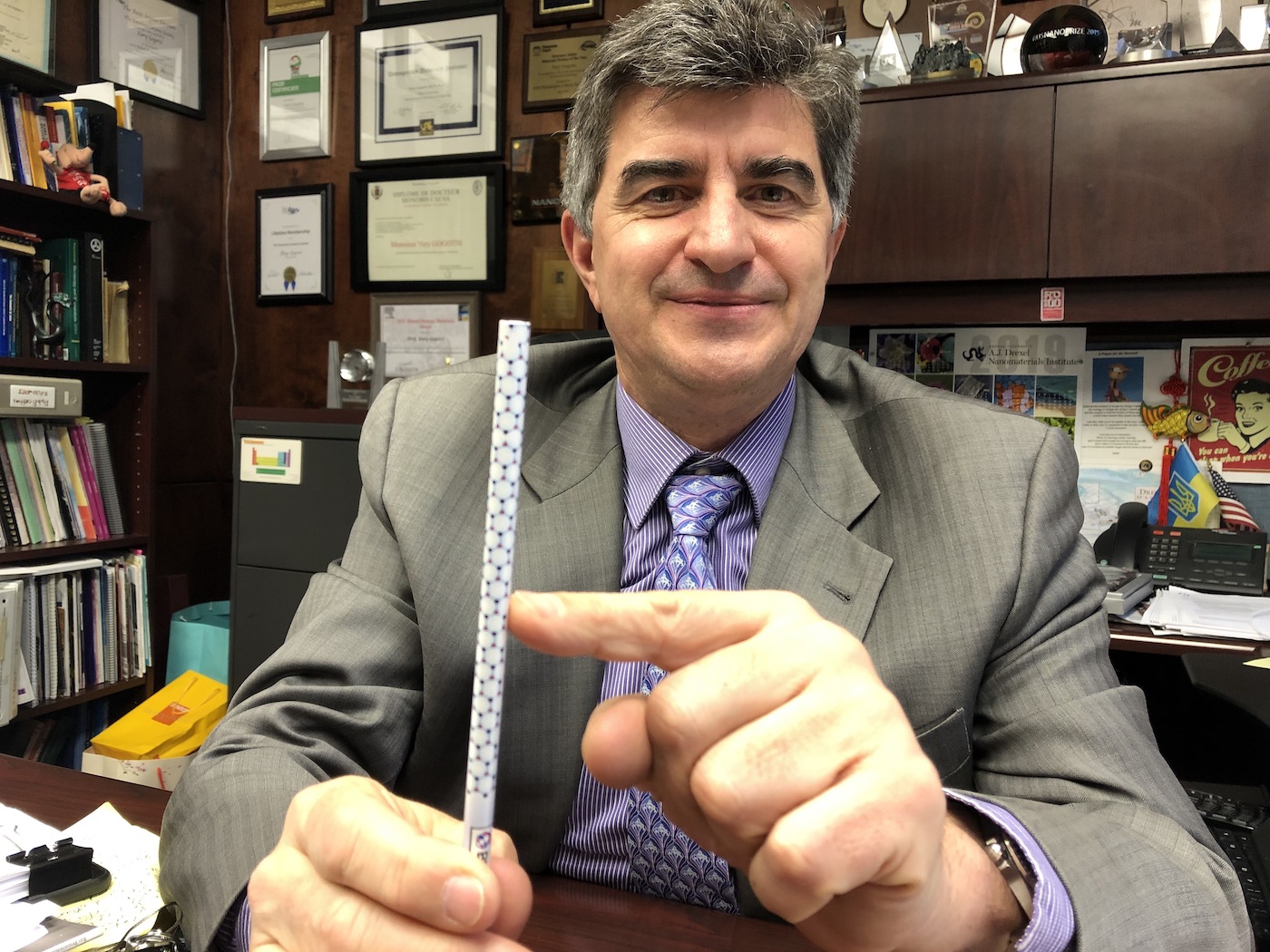 Yury Gogotsi in his office, pointing to a pencil illustrated with the molecular structure of a carbon nanotube. The pencil is 1 million times larger than a real nanotube in diameter. Emily Pontecorvo / Grist

The promise of these less-than-flyspeck objects is that they exhibit different behaviors and properties than their “bulk” material counterparts. They might be more electrically conductive, or reflect light differently, or have a different melting point. But the most important of these properties, when it comes to building better batteries, is exponentially more surface area.

When you cut an object in half, you increase its surface area without changing its mass. For example, say you’re eating an apple with peanut butter. When you slice the apple, you’re creating all these new surfaces to slather on that peanutty goodness, but the amount of apple stays the same. Nanomaterials are like objects that have been sliced in half millions of times. In the case of batteries, you can pack a lot more of them into the same amount of space as those built with traditional materials, and the additional surface area will increase the amount of ions and electrons the battery can hold, meaning it can store more energy.

But in order to improve charging speed, “We need to have very fast movement of ions and electrons,” said Ekaterina Pomerantseva, one of Gogotsi’s colleagues in the AJ Drexel Nanomaterials Institute. “And with reduced size of the particles, both will be achieved much easier than in the case of bulkier, bigger particles.”

To understand why ions and electrons move more quickly through smaller particles, Pomerantseva recommends thinking of batteries as buildings. If your car battery is an apartment building with one entrance, and a thousand people are trying to get in, it’s going to take some time for each person to enter and make their way to their apartment. But if instead your battery were made up of a dense row of houses, each with its own door, people would be able to make their way inside and spread throughout the rooms much faster.

Just how much faster depends not only on the size of the particles, but also on the materials used. Discovering and synthesizing better materials, Pomerantseva said, are the most exciting parts of the work. “I have this incredible feeling when I see a material that nobody else has in his or her hands, only me, only my group,” she said. Once they have a new material on their hands, they test it in a battery cell to see how it performs. “Those first steps you take in understanding how this material works bring a lot of excitement, a lot of positive feelings, a lot of hopes, which do not always … stay.” 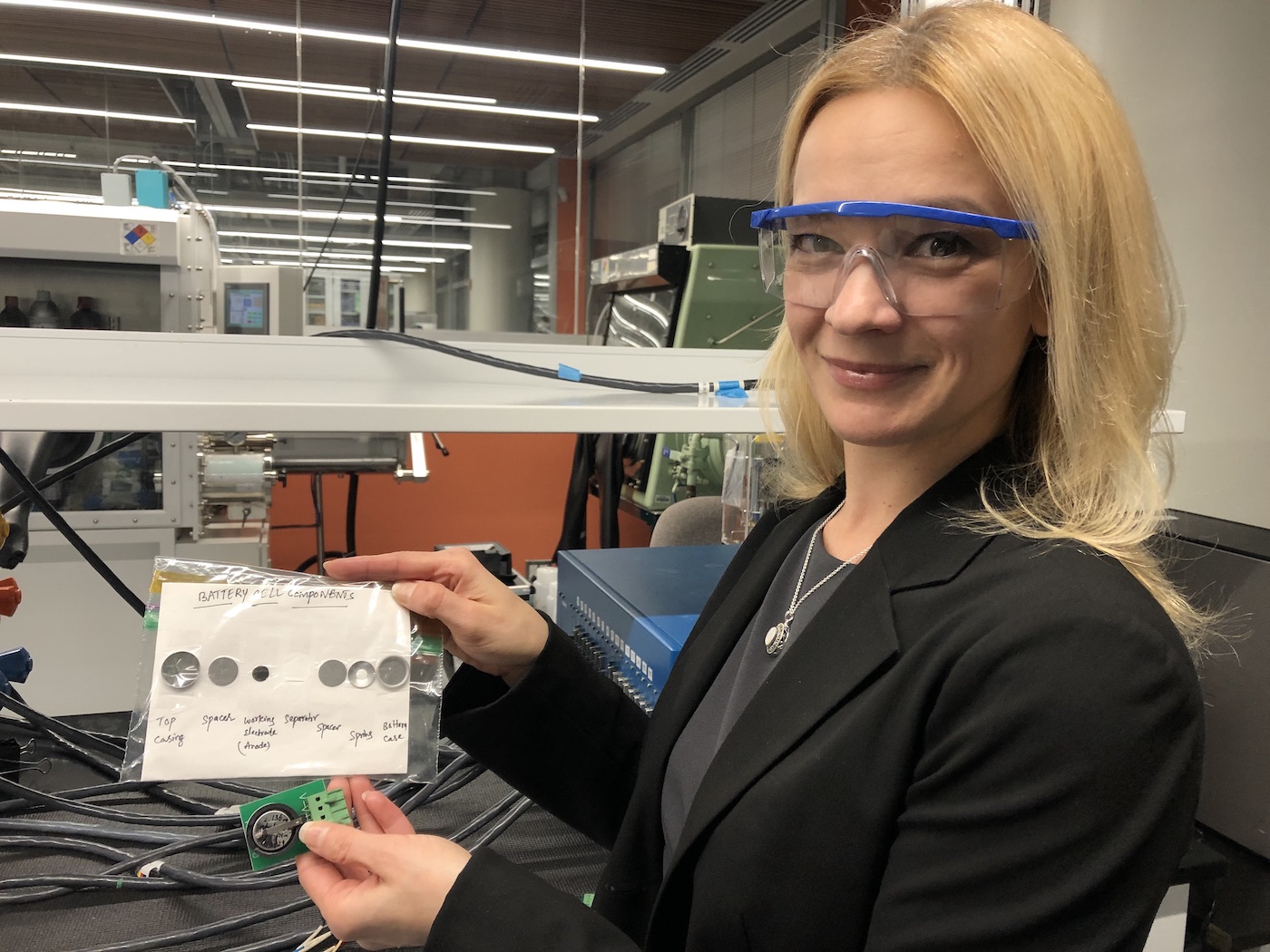 Ekaterina Pomerantseva in her lab, holding up a card with the different components of a simple coin battery. The anode is made of a polymer film coated with a slurry of nanoparticles.

Those dashed hopes sometimes stem from what Pomerantseva called the “drama” of nanomaterials. The very thing that gives them an advantage is also their greatest weakness — materials with a high surface area are very reactive, Pomerantseva explained, and inside a battery, this can lead to unwanted reactions that cause the battery to degrade quickly. And even when researchers discover high-performing nanomaterials, they can be difficult to manufacture at scale outside of the laboratory. Pomerantseva and Gogotsi recently published an article in Science that describes these and other challenges the field is trying to overcome.

The biggest recent breakthrough in the field, according to Gogotsi and Pomerantseva, comes from a company called Sila Nanotechnologies. Many scientists and companies have been trying to figure out how to replace the graphite typically used in lithium-ion batteries with silicon, because silicon, at least theoretically, can store 10 times more energy than graphite. Plus, it’s a much cheaper, lighter material. But when silicon absorbs lithium ions, it swells, causing reactions that degrade the battery. Sila Nanotechnologies claims it has solved this problem with its “nanocomposite” of silicon and other materials; the exact formulation is confidential intellectual property. The company, which is now valued at more than $1 billion thanks to investments from companies like BMW and Daimler, says its product will increase battery capacity by 20 to 40 percent, and expects to get its technology into the hands of commercial companies in the next year.

But the lithium in these batteries, which are ubiquitous in everything from electric cars to cell phones to utility grid storage, is a problem in its own right. Lithium is a scarce, expensive resource, with environmental consequences, and there are much more abundant elements we could be using. This is another problem that some nanomaterials scientists are working on, including Gogotski and Pomerantseva. They call this area of research “beyond lithium-ion” batteries and are exploring replacing lithium with materials like sodium, potassium, magnesium, and aluminum. 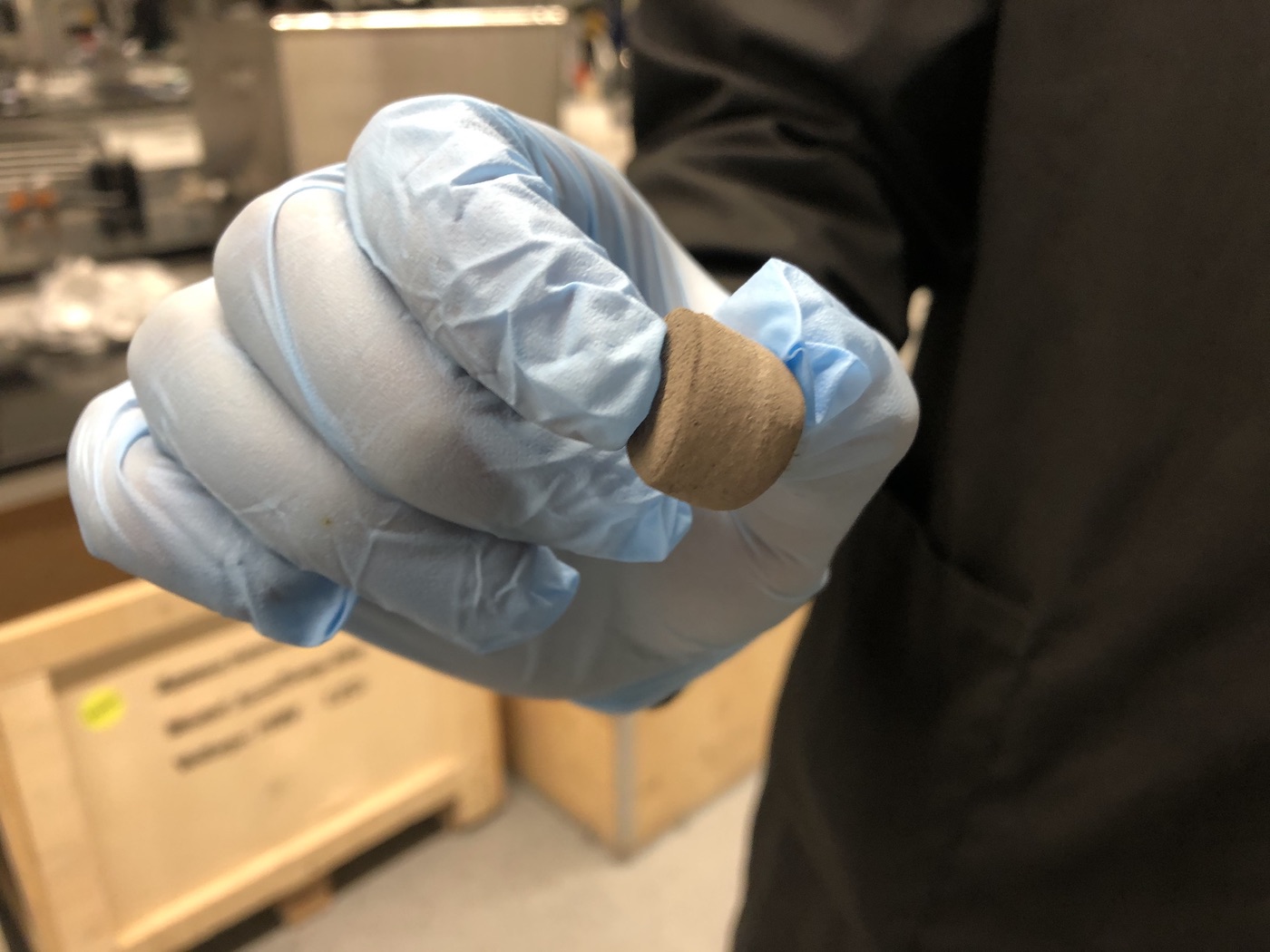 Christopher Shuck, a postdoctoral researcher in Gogotsi’s lab, holds up a “precursor” made of titanium, carbon, and aluminum — a bulk material that he will break down to create nanoparticles. Emily Pontecorvo / Grist

And batteries as we know them are just the beginning. Because of their undetectable size, Gogotsi envisions a future where we can integrate nanomaterials into just about any object to harness and store more of the ambient energy that is all around us but currently gets wasted. “As you walk to work, just go for a walk in the park, you actually generate a lot of energy just by stepping. You generate a lot of energy by moving,” he said. If you had a battery fast enough to store this short pulse of energy, Gogotsi said, you could use it to power your cell phone and other devices. Gogotsi’s team has already collaborated on an experiment where they dyed different yarns in a nanomaterial-based ink and wove it into clothing to create conductive textiles.

This kind of application has implications far beyond the convenience of self-powered devices. The more our everyday objects are imbued with the ability to store energy, the less we may need to generate energy or rely on a central electric grid. “If we learn [how to do] this type of ubiquitous everywhere energy storage system, we will have a much more environmentally friendly system in the world,” said Gogotsi.