About all those oil tankers off the coast of California ... 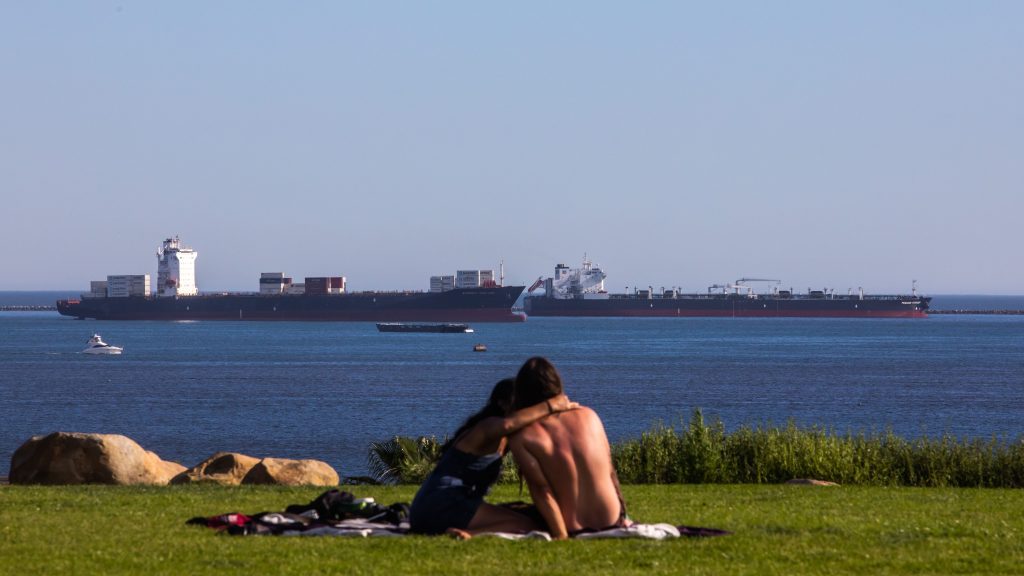 A couple enjoys the sun at Long Beach's Cherry Park with an oil tanker and a cargo ship seen anchored off the coast in the distance. Apu Gomes / AFP via Getty Images
oil aboard!

About all those oil tankers off the coast of California …

The U.S. oil market was in a tailspin when dozens of oil tankers began approaching California’s coast in late April. The vessels, some as long as three football fields, were filled with millions of barrels of oil that suddenly had no place to go.

Amid the combined effects of a price war between oil-rich states Saudi Arabia and Russia and the COVID-19 pandemic’s curbing of demand, American refineries slashed production while onshore facilities filled to the brim. As a result, U.S. oil prices plunged to negative levels for the first time in history.

Tankers are still anchored near southern California today, and as they wait, they’ve switched from running their primary diesel engines to smaller auxiliary engines. While idling doesn’t create the carbon emissions of actually transporting cargo, the fleet is still generating the equivalent daily footprint of driving roughly 16,000 passenger cars. The giant ships burn fuel to keep lights on, power equipment, and heat the large volumes of crude oil resting in their tanks. Given the turbulent economy, oil analysts say the tankers might sit in suspended animation for weeks or months.

In recent days, as many as 32 tankers were anchored near Los Angeles and Long Beach, with some vessels leaving and new ones arriving as oil very slowly trickles in and out of ports. On May 11, 18 tankers filled designated spots as if in a “truck stop parking lot” three miles offshore, said Captain Kit Louttit, who monitors port traffic for the Marine Exchange of Southern California. That is about triple the typical number of tankers in those spaces.

Tankers along the U.S. West Coast, mainly off of California, held some 20 million barrels of oil on Monday, or nearly enough to satisfy a fifth of the world’s daily oil consumption, according to market data firm Kpler. The floating supply glut should gradually clear once new deliveries from the Middle East and Asia stop arriving.

But while the idling ships remain near California, they “could pose an ongoing risk to air quality,” said Bryan Comer, a senior researcher at the environmental think tank International Council on Clean Transportation, or ICCT. “Especially because you have these ships lumped together.” The cluster, he noted, concentrates the pollution that drifts ashore.

ICCT gathers annual emissions and fuel-use data for the world’s shipping fleet. By its estimates, the largest oil tankers burn nearly 4 tons of petroleum-based fuel every day they’re at anchor. That means each ship emits more than 11 tons of carbon dioxide per day — the equivalent of driving nearly 800 passenger vehicles. Anchored tankers also emit about 15 pounds of sulfur dioxide and 8 pounds of particulate matter daily, contributing to smog and air pollution. (Those global data points hold true even off the coast of California, Comer said, despite cargo ships of all kinds having to meet some of the strictest air-quality rules in the region.)

Worldwide, shipping regulators are cracking down on sulfur pollution, which is linked to heart and lung disease — and is thought to raise the risk of dying from COVID-19. As of this past January, oceangoing vessels can burn fuel with only 0.5 percent sulfur content, a significant drop from the previous limit of 3.5 percent. However, since 2012, California has required ships sailing within 28 miles of its coastline to use lighter “distillate” fuels with just 0.1 percent sulfur content. (A similar rule now applies to most coastlines in the United States and Canada.) Still, even the cleaner-burning distillate fuel has nearly 70 times the sulfur content of on-road diesel fuel.

It’s not yet clear how the tankers will affect shipping pollution overall — especially in light of pandemic-induced disruptions across the industry. Container ships and other cargo vessels are sailing far less frequently to ports around the world as measures taken to slow the spread of coronavirus upend trade flows and squeeze consumer demand. In Los Angeles, home of the busiest U.S. container port, cargo volumes fell by 15.5 percent in the first four months of 2020, with no growth expected in the near future. Comer said researchers haven’t yet calculated the net effect of fewer trips and idling tankers on shipping-related emissions.

Much like in California, oil tankers are crowding ports in places like India, Singapore, and the U.S. Gulf Coast, serving as temporary storage units or waiting indefinitely for customers. With cities and countries on lockdown, global oil demand fell sharply in April to levels last seen in 1995, according to the International Energy Agency. Russia and Saudi Arabia only agreed last month to cut output to ease the glut.

According to ICCT’s Comer, some of these stranded vessels pose pollution concerns beyond air quality. Certain tankers burn dirty bunker fuel — a byproduct of the petroleum refining process — and use “open-loop” scrubbers to reduce the ship’s sulfur output in line with regulations. The scrubber systems mix water with exhaust gas, filter it, then dump the resulting washwater — an acidic mixture that contains carcinogens like polycyclic aromatic hydrocarbons and heavy metals that can harm marine life. ICCT estimates that large vessels emit nearly 40 tons of scrubber washwater every hour.

This particular problem doesn’t apply to California, where state regulators prohibit scrubber use. And while anchoring so many massive tankers could raise the risk of collisions and spills, Capt. Louttit said that every vessel’s movement is monitored and planned in advance to prevent such a catastrophe. The U.S. Coast Guard also flies helicopters over California’s San Pedro Bay to ensure the vessels aren’t leaking oil or dumping trash or sewage.

The California Air Resources Board, or CARB, which monitors air quality in the state, said that given the tankers’ “fairly low” power needs while idling, their emissions “are not likely as high as” when the ships are at berth and running pumps to load crude oil onto ships or shore. Nevertheless, storing the excess crude at sea doesn’t come without some environmental cost.

“We are experiencing a unique and extraordinary situation,” CARB spokesperson Karen Caesar said about the tankers. “We are closely monitoring the situation and tracking these ships.”