Don’t mind me — I’ll be over here, staring wide-eyed at my computer screen, sifting through an endless treasure trove of food facts and trivia. National Geographic’s interactive map, “Eat: The Story of Food,” is a delicious history of the evolution of food. I’m here to whet your appetite with choice tidbits, like how some scientists think that the size of the human brain doubled after we started eating cooked meat.

First, let me set the scene — or in this case, the dinner table. The website is divided into six dishes and each section tells a piece of the story of how people have manipulated aspects of the natural world to make something edible, and oft delicious. 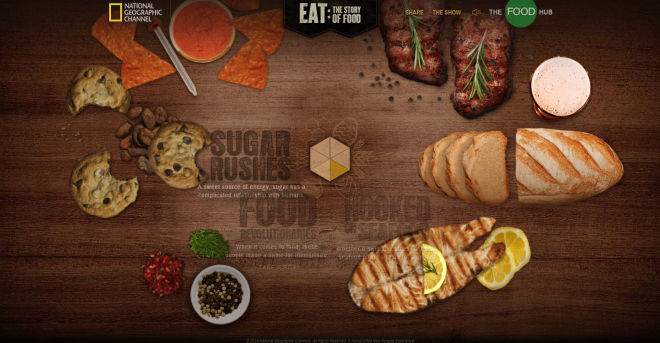 Click on a set of steaks and you’re inundated with information on the revolutionary act of searing meat. The juicy Carnivores section includes the birth of barbecue:

The “low and slow” cooking method that makes barbecue so tender and delicious was born of the desire to make tougher, less desirable parts of animals more enjoyable. Slaves in the pre-Civil War south perfected the air of barbecuing while plantation owners ate the choice cuts of meat.

Next, click on the loaf, and find out how humans learned to grind grain and turn it into bread. Baked & Buzzed includes the history and importance of grain and yeast’s most revered lovechild: beer.

Respected laborers, some ancient Egyptian pyramid workers were paid in beer and food instead of money. Those who died during construction were sometimes buried with rations of beer and bread to take into the afterlife.

Then there’s a lemon and thyme topped sea bass that brings you to the history and future of the fishing industry. Hooked on Seafood shows the evolution of what we deem as fine seafood cuisine:

When America was still a young nation, lobster was shunned by the wealthy as a food for servants, slaves, and prisoners. That all changed when railroad passengers in the late 1800s, who were unfamiliar with the giant sea bug’s history, dined on lobster and helped it reach its status as a gourmet food.

Next, Food Revolutionaries tells the story of how chefs flambeed and sautéed their way to food as art. Click the bowl of peppercorns and chopped endives for an exploration of the future of food:

Guilty Pleasures documents the “battle for the American stomach” and is symbolized by a haphazard pile of Doritos:

At Doritos inventor Arch West’s funeral, attendees sprinkled the chips into his grave in tribute.

Finally, a chocolate chip cookie brings you to humans’ complicated and sordid relationship with Sugar Rushes:

Queen Elizabeth was a huge fan of sugary treats, and her blackened teeth were proof of her indulgence. Since sugar was expensive, people began blackening their teeth intentionally with cosmetics to give the appearance of wealth.

For more on how we got from simply roasting meat to scarfing corn chips from a plastic bag, be sure to check out the full project. I, for one, am stuffed.