Are your reusable grocery bags making you fat? 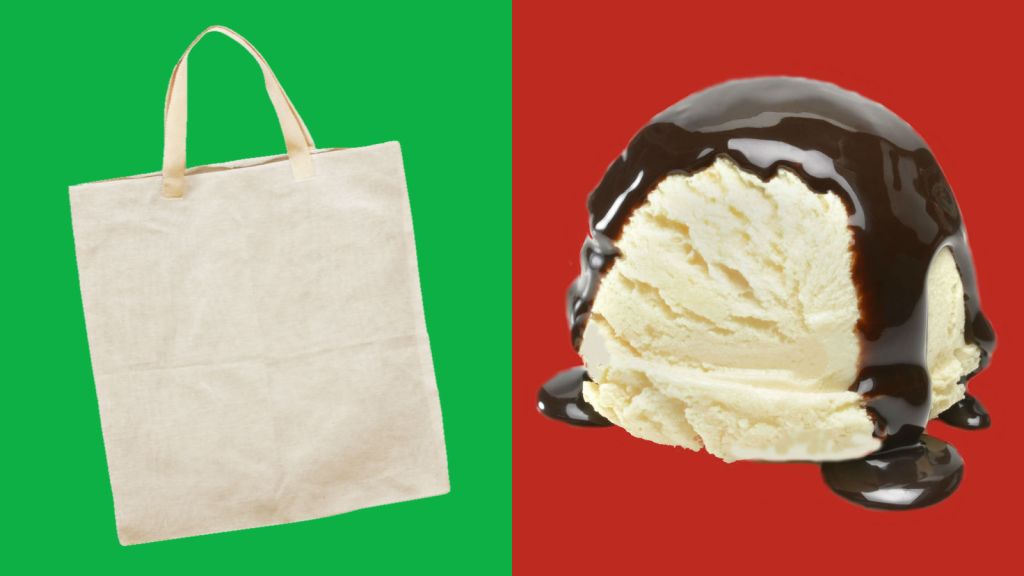 Are your reusable grocery bags making you fat?

As an insane 19-year-old, I worked the late-night shift at the Vassar College coffee shop. Included among “Java City”’s offerings was a milkshake made with an entire pint of the Ben & Jerry’s ice cream of your choice, which cost approximately $7 — but just as calories are no object when you are a lithe college student subsisting exclusively on designer speed and cereal from the dining hall, money’s no object when it comes from your meal plan! Two kinds of students patronized the coffee shop late at night: procrastinators and/or overachievers, and stoners. The former category, drunk on self-congratulation for their own 2:00 a.m. essay-writing, frequently added one of these milkshakes to their order of a quadruple espresso. The latter category, high on weed, purchased these devil-beverages for other reasons.

It turns out that the rewarding-pseudo-hard-work-with-ice-cream response carries beyond the deranged minds of college students into the slightly less deranged minds of functioning adults. Uma Karmarkar, an assistant professor at the Harvard Business School, lead a study analyzing the grocery receipts of thousands of Californians, and noticed a trend: Customers who took the absolute minimal initiative of bringing their own goddamn bags to the grocery store found that reason enough to congratulate themselves with, say, a pint of Chocolate Fudge Brownie.

Karmarkar did an interview with the Harvard Business Review to discuss this study:

So this is the classic indulgence: You do good and—

You give yourself a cookie. In this case literally. In consumer psychology the word “licensing” is the key. If I behave well in one situation, I give myself license to misbehave in another, unrelated situation. Similar research has also been done on health decisions. I get a Diet Coke; I treat myself to a hamburger. In this case bringing a bag makes you think you’re environmentally friendly, so you get some ice cream. You feel you’ve earned it.

Karmarkar: It was clear that shoppers who brought their own bags were more likely to replace nonorganic versions of goods like milk with organic versions. So one green action led to another.

This also makes sense: Putting industrially-produced milk in your Oakland Farmers’ Market tote is like pairing an Azzedine Alaïa with parking lot asphalt — not a match!

Anyway, there you have it. A reusable bag can make your groceries a little greener and more delicious! We’re not going to penalize you for the ice cream, because life is to be enjoyed.