My 8-year-old daughter only began to comprehend the absolute weirdness of living in this time of coronavirus on a recent trip to a grocery store.

The line outside to get in, the employee regulating traffic at the door, the gloops of hand sanitizer, the face masks — it was all bizarre. And stranger than strange were the empty shelves. For the first time, she could see that she was living through an extraordinary moment in history.

“That was super weird,” she said quietly, when we got home.

The abundance of food in a grocery store is every bit as much a hallmark of Americana as Bugs Bunny and Major League Baseball. So it’s eerie to see those shelves bare.

What exactly is going on here? Are people irrationally hoarding beans and toilet paper? It turns out, not so much. To find out what’s really happening, I talked to a few people who study the country’s massive chain of farms, trucks, and warehouses that deliver the nutrients we all need to survive to ask how the system is holding up, what this stress test tells us about preparing for future shocks, and just what the fresh hell is happening with toilet paper.

The sudden shift in the way Americans shop is stunning.

“One stat I have heard from grocery store folks is that the traffic in their stores is up tremendously, like 300 percent,” said Jayson Lusk, an agricultural economist at Purdue University.

Grocery store sales reached the highest level in history in the week ending March 15, an eye-popping 62 percent higher than in the same week last year, according to the retail research company IRI. Americans are buying a lot of staples — bread, eggs, beans — but also just buying more of everything. Nail polish remover sales are up nearly 60 percent, too.

In turn, grocery stores have to order more from their suppliers, driving up prices. The wholesale price of a dozen eggs jumped from 90 cents at the start of the year to a recent $3.00. 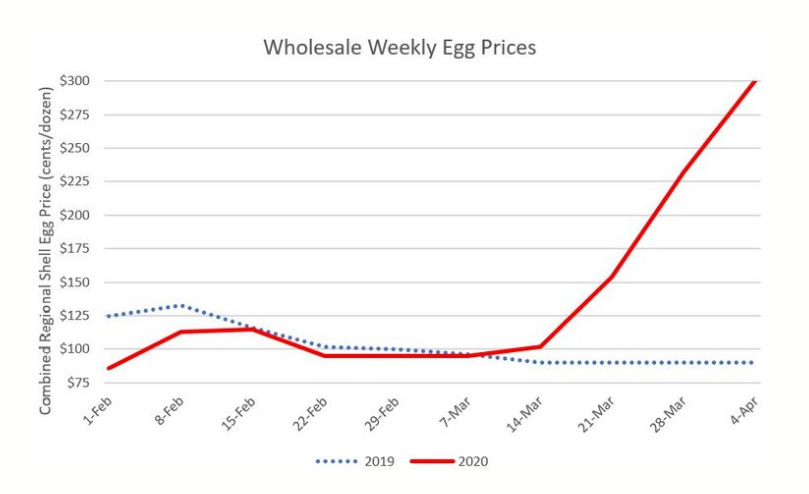 We’re running out of food!

Not true. There are pigs aplenty and enough chickens for every pot. Cattle are copious.

“We’re actually on pace to produce more beef than we have in, really recorded history, this year,” Lusk said.

There’s plenty of wheat, too. But it has to be ground, baked into bread, and delivered. Before you can eat a sausage, someone needs to slaughter a pig, cut it up, and get it on a shelf. And that’s where there are bottlenecks.

“There’s only so many loading docks coming out of a distribution center,” said Shelie Miller, a professor at the University of Michigan who studies the environmental impacts of food systems. “The system is not designed for everyone to buy everything at once, but it will catch up.”

Why are we shopping more?

If you tell people they should be prepared to stay in their house for a long time, it only makes sense that they are going to fill up their pantries. That part is no mystery. But after the first week or two, you’d think people would go back to their normal shopping patterns and grocery stores shelves would be full again. After all, it’s not like we are eating more, right?

Turns out, we are eating more groceries. A lot more. You might have noticed the same thing that I’ve noticed in my house: Food seems to run low at an alarming pace. That’s because we are no longer eating out. Instead of getting food from school lunches, company cafeterias, and restaurants, Americans are now getting the bulk of their calories from grocery stores. Normally, the meat Americans eat is split evenly — half from restaurants (and schools, and office canteens) and half from stores. That has “drastically shifted,” with 85 percent of meat running through grocery stores, a Cargill executive told Food Navigator.

And it’s not like all the trucks full of food headed for restaurants can just turn around and drive to a grocery store instead. There’s only so much space on the shelf in every store, and it takes a while for grocers who need more milk, say, to figure out who has excess and negotiate a new deal. That’s why dairies are dumping truckloads of milk into fields around the country. But pretty soon, people will figure out how to divert the food headed for restaurants so that it gets to groceries instead. It’s already beginning to happen:

“Some of the big meatpackers have already said they are doing that,” Lusk said. “They are packing more individual items, rather than big cuts that normally go to restaurants.”

As a result, prices for meat have started to go down. 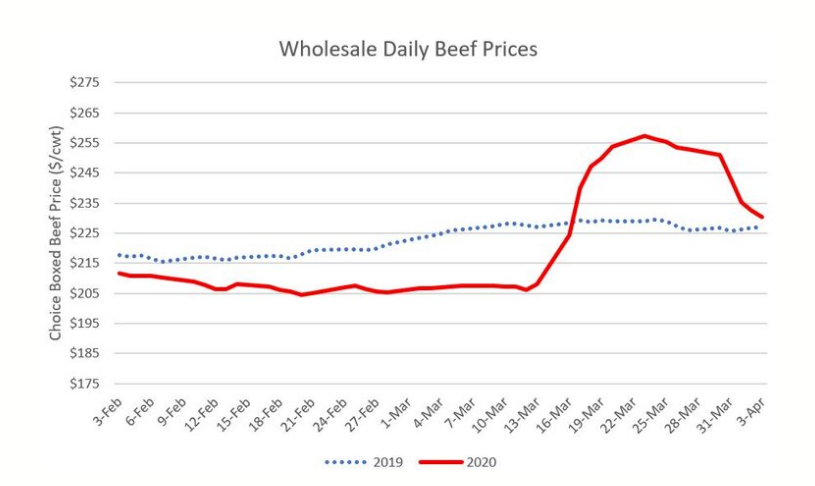 Where are the strains?

Anywhere the food system relies on workers: people who pick the veggies, drive the trucks, and restock the shelves. Many farmworkers come on special work visas from Mexico — now suspended. It’s likely that melons and lettuce will rot in the fields this year.

A lot of the people who harvest and process our food can’t afford to quarantine themselves. Already a few workers at meatpacking houses have contracted the coronavirus. That’s concerning because these packing houses tend to be big; Big enough that when something goes wrong it can trigger shockwaves of shortages. If there aren’t enough workers to run any one of these food-processing links in the food chain, that could cause major problems.

“Last fall there was a lot of fervor when a fire in a Tyson meatpacking plant caused really big disruptions in the meat market,” Lusk said. “That one facility was about 5 percent of all the beef processing in the country.”

What does this stress test tell us about eating in a hotter future?

Big meatpacking plants are very good at producing affordable food. But their size also makes the country vulnerable to shocks: A single flood or fire could shut down a significant portion of the food system.

To prepare for future disasters we might want to encourage food companies to have five or six food processing plants scattered around the countryside, rather than one giant regional plant, Lusk said. That would cost more, but it would be more resilient.

Some help could come from abroad. If one giant slaughterhouse or grain-processing plant goes dark in the United States, there’s already a robust network of ships and rails to move food around the world.

But in many ways the coronavirus pandemic presents fundamentally different challenges than the slow emergency of climate change. Adapting to a hotter planet requires figuring out how to feed ourselves without releasing greenhouse gases, which means growing more food on less land, so that we can stop cutting down forests, and start growing more carbon-sucking trees.

Who gets left out?

There is a real danger that this pandemic causes many more people to go hungry, not because there isn’t enough food to go around, but because the economic slowdown leaves families without the money to buy it.

“COVID-19 is a health crisis. But it could also lead to a food security crisis if proper measures are not taken,” wrote Shenggen Fan, former director general of the International Food Policy Research Institute, which is funded by governments and foundations.

Researchers at IFPRI projected that the number of desperately poor people — those living on less than $1.90 a day — could surge by 14 million because of the virus to around 750 million. If the pandemic shuts down international trade, that could rise to 22 million. That increase of 2 or 3 percent is especially significant, because the number of people living in extreme poverty has been falling for years.

It’s hard to tell. Americans are buying tons of food, and some of that could end up in the trash.

“As a general rule, Americans already tend to produce a lot of food waste,” Miller said. “Estimates are 30 to 40 percent of food that is grown ends up going to waste — and a lot of that happens in our own refrigerators where we buy produce and then let it wilt and rot.”

This has big environmental consequences. Just think of all the farmland that could be devoted to wildlife, all the water that wouldn’t need to be pumped out of aquifers to farmland, if we stopped letting so much food rot.

But we are also spending so much time at home that we have time to cook, and to plan out how we will use up food. That makes this quarantine period an important opportunity Miller said: “Because if we are doing it now we might be able to keep doing it when things go back to normal.”

It’s also an opportunity to think a little differently about food waste. It’s understandable that people want to overstock their pantries even if it means throwing some things out, Lusk said, because for any one person waste is better than scarcity. Ideally we’d have a food system with some excess — that produces a little waste in normal times but can fill bellies in emergencies — rather than a system that’s so lean that leads to hunger when something unexpected happens. As we can see with masks and ventilators, there can be tragic downsides to keeping a lean supply of surplus.

OK, so what the heck is going on with toilet paper?

The explanation for those empty shelves isn’t panic buying. Sure, some people are buying too much. But people really do need more toilet paper at home because they aren’t using the bathrooms in office buildings, airports and restaurants anymore, as Will Oremus of OneZero explained in a post on Medium. The paper giant Georgia Pacific estimated that people staying at home full time would need to buy 40 percent more TP.

The larger issue is that supply chains just aren’t cut out for the shift in demand. Just like food — which is split into two supply chains for restaurants and grocery stores — toilet paper is divided between industrial and consumer markets. That toilet paper in public restrooms comes in giant rolls. And so, just like food, companies can’t just turn the trucks headed for the office parks and send them to grocery warehouses. They need to retool their supply chains to deliver household-sized products to grocery stores.

And once stores ran out of TP, Lusk thinks store managers may have prioritized other goods:

“If a grocery store has one semi-truck showing up at their backdoor from the warehouse, what do you tell the warehouse to fill that truck up with? Toilet paper is big and bulky: It doesn’t take a lot to fill up the back of a semi truck. If your choices are toilet paper or bread and pasta you are going to choose the bread and pasta.”

One of coronavirus’s lasting legacies: The end of work as we knew it