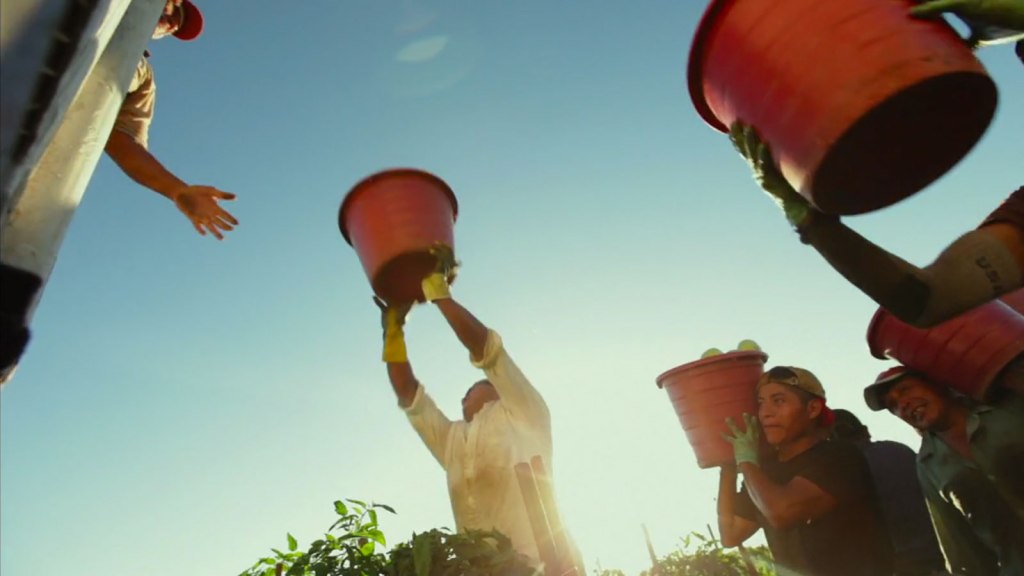 Last night, Obama announced an executive order overhauling immigration policy and granting protection from deportation to some 5 million immigrants. Republicans are irate, because of course they are, but the wrath of a bunch foamy-moathed old white men is just more exhausting than anything else. A snoozefest, if you will. Let’s just not talk about it.

Let’s talk about farms instead! Hell of a segue, but bear with me. Immigration has everything to do with agriculture in the U.S. – at least as it functions today. And the fact that our agricultural system literally could not function without immigrant labor (it can’t) is a symptom of the super-cheap food system we have today.

The majority of crop workers are foreign-born, and it’s estimated — although, obviously, difficult to verify — that most of those are undocumented. Lack of documentation is equivalent to lack of rights, which means that workers put up with being paid below minimum wage and harsh and unregulated work environments (think threats, sexual harassment, exposure to chemicals). The H-2A guest worker program brings thousands of seasonal farmworkers into the country each year, primarily from Mexico, but provides almost no protection of labor rights. And many more undocumented workers come to the U.S. outside of the program.

So how will Obama’s immigration reform plan help farmworkers? Well, it won’t, really. The plan excludes anyone who has come to the U.S. illegally within the past five years. It also eases the immigration/employment process for those coming to the U.S. on H-1B visas, which largely applies to higher-education industries — in other words, not agriculture.

Sanjay Rawal is the director of Food Chains, a documentary about farmworkers in the United States, which is released in theaters today. I got to chat with him about whether Obama’s failure to address farmworkers in his immigration reform is actually a significant setback.

“Obama is not addressing the needs of agricultural workers in this country,” he agrees. “The reason why the agricultural lobby did not push for farmworkers to be included — and in essence actually fought against it — was because they said that if farmworkers get a pathway to citizenship, they will no longer work in the fields, and [farms] will lose that labor force.”

The thesis of Food Chains, essentially, is that the exploitation of migrant farmworkers is a direct result of supermarket monopsony. In short, huge supermarket chains have maintained prices at artificially low levels as the cost of producing fruits and vegetables — in terms of land and equipment — has increased. To survive, farmers have no choice but to hire very, very cheap labor.

Food Chains traces a campaign orchestrated by the Coalition of Immokalee Workers, a farmworkers’ union in Immokalee, Fla., to get the supermarket chain Publix to raise the price of each pound of tomatoes by one cent. This would double the wages paid to farmworkers, who are compensated by the amount of tomatoes they pick.

“It’s not the hard work [that’s the problem], but it’s the fact that people are treated terribly, and they’re paid very poorly,” explains Rawal. But the Fair Food Program, which originated from the CIW campaign, guarantees that large buyers — supermarket and fast food chains including Walmart, Trader Joe’s, and McDonald’s — refuse to purchase from farms that operate with known human rights violations. (For the record, Publix has refused to join the Fair Food Program.) So far, it’s been effective in raising wages and increasing quality of life for farmworkers.

“[The Fair Food Program] has circumvented this legislative vacuum, and it’s created a system — for the first time in our nation’s history — where we have farmworkers who are legally, through these contracts, required to earn a living wage and [be] treated as human beings,” says Rawal. “And that’s through the power of corporate purchasing, and ultimately through the power that consumers have over the supply chain.”

So Obama didn’t come through for farmworkers last night. Turns out, that’s not a death knell for migrant workers’ rights — as with everything in the good ol’ U S of A, corporations can have more power than government when it comes to the treatment of farmworkers! The system, however, is still very far from perfect — but as long as the agricultural lobby is so focused on preserving a minimum-cost, large-scale farming system, consumer-driven initiatives like the Fair Food Program might be the only option we have.

Watch the trailer for Food Chains below, and check to see if it’s playing in your area here.