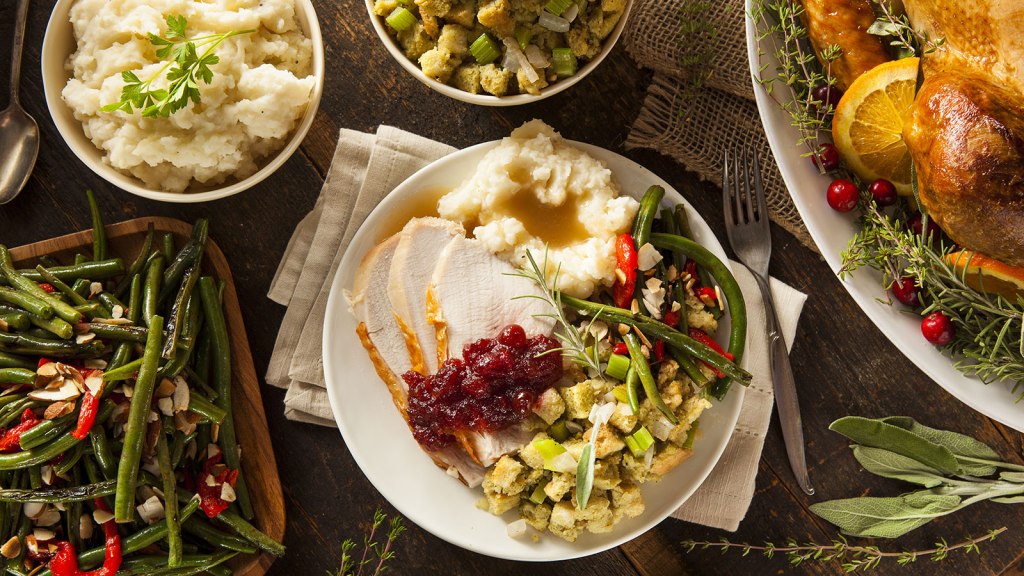 This Thanksgiving when you sit down to eat, it might be an interesting experiment to try to thank everyone who brought you that food, if only from afar.

This would include someone who sold the food (a grocer or farmer-stand worker), and the farmworkers, but also many more. Don’t forget the people who transported your food, the people at the distribution hub, the government inspectors who work to keep it safe while reigning in environmental impacts, the breeders who provide the seeds, and the nearby animal-farm owner who provides the manure for fertilizer. If you have a processed food like ice cream, or meat (turkey!), you have another set of people to thank: hairnet-wearing factory workers, food scientists, flavor specialists, turkey-feed producers, poultry farmers, and importantly, the turkey itself.

One thing I find, when I try this experiment in thankfulness, is that everyone I imagine in this food chain is a good person trying, as best they know how, to bring us healthful and delicious meals. The food system has its problems, but they are structural, and just about everyone in it wants to correct those problems.

I heard from several of those people — mostly farmers — after Mark Bittman, Michael Pollan, Ricardo Salvador, and Olivier De Schutter published an opinion piece articulating the structural problems with the food system and laying out a set of goals for a national food policy.

The farmers were upset because they read this op-ed as an attack on their life work. I can understand that: The piece reads not as a loving critique, but as a rousing call to action. It makes sense that the people who currently bring us our food might interpret it as a call to action against them. But if you read the proposed goals with an open mind and a generous spirit, it’s hard to imagine anyone taking issue. Forget about how these things might be implemented for a second, and just ask yourself if you agree with these principles:

Farm policies are designed to support our public health and environmental objectives;

Our food supply is free of toxic bacteria, chemicals and drugs;

Production and marketing of our food are done transparently;

The food industry pays a fair wage to those it employs;

Food marketing sets children up for healthful lives by instilling in them a habit of eating real food;

Animals are treated with compassion and attention to their well-being…

The details, of course, bedevil any interpretation or application of these goals. Does compassion for animals mean that we shouldn’t keep them in the tight confinement of battery cages and gestation crates? Does it mean that we shouldn’t eat them at all? When we are keeping our food supply free of toxic germs, chemicals, and drugs, who gets to decide what’s toxic? Does freedom from toxic bacteria mean we should crack down harder on the threat of French cheeses? How do we reconcile the people out there who equate all chemicals with “poison” and the people who would like to irradiate all food to kill off germs?

So yes, all hell breaks loose in the particulars. But the point is that both radiation proponents and chemophobes can at least agree on these goals in the abstract, before they plunge into the debate over what works and what doesn’t. I absolutely agree with the authors that it’s useful to define our core principles for a national food policy. Those principles would become a pole-star for all the people working, in their own ways, to improve the food system.

Bittman, Pollan, Salvador, and De Schutter want President Obama to lay out a national food policy and begin to implement it as best he can within the executive branch. Obama isn’t likely to do that, for the same reason he has refrained from taking a muscular stance on the Ferguson shooting, and the same reason he waited years before taking executive action on immigration reform.

That reason? Ezra Klein articulated it best in his conversation with political scientist Frances Lee.

“Doing what people think of as leading — going public, making big speeches, getting people excited — that can actually be harmful to passing his agenda. Because the more a president associates himself with an idea, the more important it becomes for the minority party to make sure that idea doesn’t pass.”

When a president takes up an issue these days, it becomes a partisan issue. The other party has every incentive to defeat it. And we’ve seen both parties reverse their position depending on who is proposing a policy. Sometimes forcing the partisan line down the opposing party’s throat is the only way to make progress (as seems to be the case with both health-care and immigration reform), but sometimes entangling an issue in partisan politics makes it tougher to solve.

There’s this old idea that if you want to change something, you do it through the national government — you go to the president, the most powerful man in the world. That’s often not the way work gets done in this era of obstructionism. Much more is being accomplished at the local and state levels, and on lower profile issues. David Festa of the Environmental Defense Fund has made a strong case that reform in national food policy can be made without the partisan bluster. Republicans, Democrats, agribusiness, food corporations, and farmers could all work together to address issues like fertilizer runoff, Festa argued. (In fact, in some places they already are.)

A good example is the Food Safety and Modernization Act, a bipartisan bill that passed unanimously in the Senate (though, to be sure, after years of ridiculous posturing). Since it became law, the FDA has been working with farmers to insure it protects eaters without unduly burdening farmers. Organic farmers were especially worried it could prevent them from applying manure to their fields, but the FDA has tweaked the rules to address these concerns. The details of the regulations are still in play (some food safety experts say the exemptions for small farmers went too far), but we actually seem to be working our way toward a rational outcome.

So if Obama does take on this issue, you can be sure he’ll do it as part of a larger, nonpartisan group. The goals that Bittman, Pollan, Salvador, and De Schutter have laid out aren’t liberal or conservative — they are simply sensible human, and patriotic. I’m thankful for the American food system, which allowed my parents to feed me well, inexpensively, and safely. And it’s because I care about our food system that I want to make it better. I’ve added my name to the list of those endorsing these goals; if you agree, you might do the same.