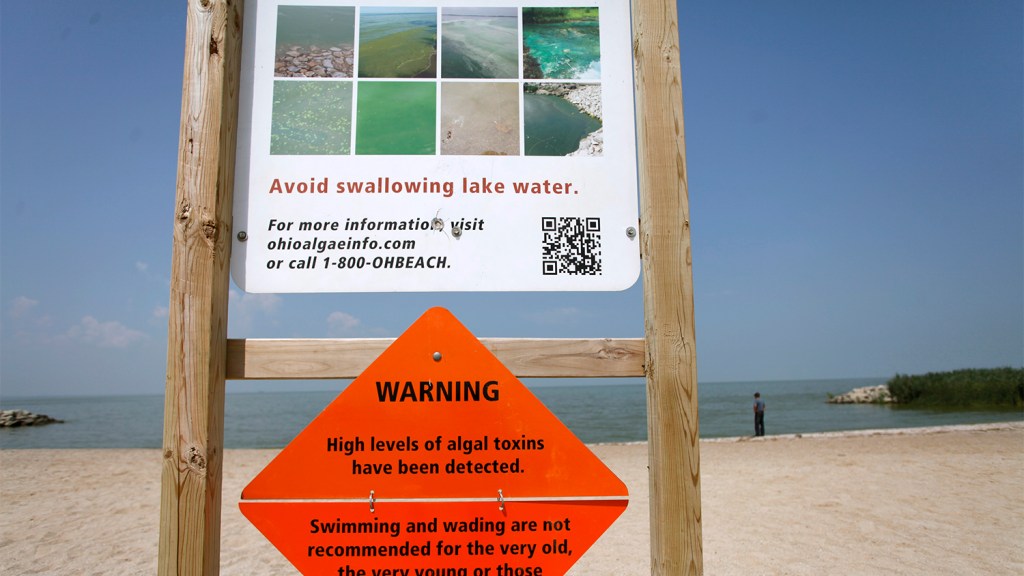 Algae warning along Lake Erie, in Ohio REUTERS/Joshua Lott
Against the ooze

I have a confession to make: I love corn. I also love soy. Dammit, I even love wheat, like most American eaters. I love it baked, ground, deep-fried, or transformed into sirloin.

And, let’s face it – even the most packaged-food snubbing, label-reading locavores among us let some form of these conventional, fertilizer-loving crops slip past our lips every now and then.

Unfortunately, feeding these crops and ourselves also means feeding environmental catastrophe. Case in point, the massive algae bloom that has cropped up on Lake Erie. Show me a crop that loves fertilizer, and I’ll show you an aquatic bacteria that loves it even more.

Invigorated from phosphorus-laden runoff sweeping out of farms, the fast-growing, green-tinted algae is thriving from the  fertilizer intended to nourish crops. The algae — cyanobacteria, to be precise — uses photosynthesis to create energy, loves warm water, and is so robust that scientists have dubbed it “the cockroaches of the aquatic world.”

Last year, a massive bloom of the same species contaminated the drinking water of half a million Toledo, Ohio, residents, and it’s fair to say that agriculture had a major hand in that situation (According to a 2013 report from an Ohio phosphorus task force, farmed cropland accounts for 61 percent of the phosphorus that ends up in the Lake Erie basin).  The runoff’s effects are many: Fields erode, crop yields fall, food costs increase, lakes turn green, and water turns toxic.

“We knew there were issues, and we’d been looking for ways to lower runoff for a long time, before the crisis even happened,” says fourth-generation corn farmer Todd Hesterman. “Lake Erie has always been sensitive, environmentally, for some time. But what’s happening there and what happened last year is just the perfect storm.”

This year, the algae returned to the Great Lakes region with a vengeance, bolstered by a deluge of runoff following heavy rains and flooding from Ohio and Indiana farmlands. The National Oceanic and Atmospheric Administration predicts that, exacerbated by climate change, it could easily morph into the most severe bloom on record.

When agriculture first arrived in the region in the 1800s, Lake Erie was thought to be lifeless, known as a ‘Black Swamp’ leftover from glacial till. Back then it seemed perfectly logical for farmers to dig ditches to drain their fields into this swamp. Today, although farmers understand the folly of their predecessors, those ditches are still part of the waterways, and they provide a perfect avenue for fertilizer-infused water to head directly to Lake Erie.

“Now, if there was anyone who had their head in the sand about this issue, they have to face it,” says Hesterman. “The double-edged sword is that we still need fertilizer for plant growth.”

Ah. That. Food has to be grown, come hell or excessively high floodwater, and fertilizer is essential for grain crops like corn. So what’s the solution?

Government can, and has, tried to force farmers to reduce runoff. After last year’s epic bloom, a few bills were introduced in Ohio with the aim of reducing  runoff. For starters, any farmer with 50 or more acres must become certified in order to use fertilizer, and the stuff is banned  when the ground is saturated with floodwater or frozen with snow. Additionally, the Natural Resources Conservation Services in the region are concentrating efforts to reduce runoff, earmarking $17.5 million for projects in Ohio, Michigan and Indiana.

But so far, government restrictions and government help hasn’t cured the problem. Farmers often resist top-down regulations, because what makes sense politically may not make sense in the context of every unique farm. Farmers are often more open to changes when the proposals come from trusted partners: Food makers and farm suppliers have a vested interest in thwarting agriculture-related problems like the Lake Erie algae bloom.

Now, more than policy and governmental agencies, the private sector is proving to be the biggest driver of farm conservation. Big Ag is going sustainable: providing money, rolling out educational programs, and networking within their industry to get the word out. Perhaps the most interesting private-sector program for fighting algae in the Great Lakes is led by wholesale agricultural products cooperative United Suppliers, along with the nonprofit Environmental Defense Fund.

“It was time,” says Matt Carstens, vice president of United Suppliers, to develop a conservation program.

Aptly named “Sustain,” the program is made up of 560 agricultural retailers, and provides guidance and training to farmers looking to get their conservation on. Those who partner with Sustain learn to use data and on-farm trials to show how to reduce fertilizer runoff, increase nutrient efficiency, and rebuild soil health. Sustain was inspired by Walmart’s commitment to reduce fertilizer runoff.

It’s kind of a big deal. The 15 companies that have signed up to reduce fertilizer runoff so far represent 30 percent of the U.S. food and beverage industry. These aren’t niche-market companies making gluten-free pizza; they are industry heavyweights. In total, those companies draw from 23 million acres of farmland, and United Suppliers hopes to have at least 10 million of that under active sustainability plans by 2020.  By that same time, EDF is aiming to get 50 percent of corn acreage into fertilizer optimization and soil health programs. They believe this will be the tipping point in making such practices the norm in commodity crop farming.

“Traditionally, a lot of sustainability within our food system is really niche stuff that costs more,” says Suzy Friedman, director of sustainable agriculture at EDF. “Organic is great, but that’s a really small part of the food system. When you start looking at these fundamental crops, you can see the potential it has when you are looking at big issues like Lake Erie and climate impact.”

In other words, we may regard the small-batch, literal fruits of labor at chic farmers’ markets as precious jewels, but they don’t have a big enough footprint to achieve the larger goal. So, we need to stop thinking about commodity crops like corn, soy, and wheat and hopeless environmental disasters and instead find ways to improve them.

Sustain aims to improve soil health and reduce fertilizer use by getting farmers to use fertilizer in more targeted, precise ways. But some of the best ways to achieve these goals, like planting cover crops or adding compost, can cost a lot of money  This has been the sticking point for farmers. Sustain is trying to change the conversation, by making the case that sustainability is worth the price.

“When educating farmers, the trainers start by listing out the benefits that would accrue from the farmer being more sustainable, and from there they can start talking about practical changes they make take,” says Karen Chapman, project manager of EDF’s agriculture sustainability program. “This way, the farmer can understand that making this a part of their business will give them greater confidence over time and help their bottom line.”

Just like farmers, food companies are also motivated by the lure of cost reduction over time.

“The food retailers themselves want to be a part of the sustainability movement, and that’s great,” says Cristina Mestre of EDF.  “But they are also looking at this from a business perspective. It’s risk management.”

Partnering up with Sustain isn’t the only choice for farmers, but it may be more enticing than working with the federal government.

“We need the regulatory backstop, and we need it to be meaningful and scientifically sound,” says Friedman. “But we also need the marketplace saying [sustainability] is a business norm and the expectation of what we buy. We’re in the beginning stages of that.”

For now, the algae of Lake Erie may be multiplying, but don’t think the farmers upstream aren’t fighting them. It’s clear that farmers and the food industry still have a long way to go, but at least they’ve come around to accepting the problem as their own.