The day began in the parking lot of a real estate office off Hwy 17 south of San Jose. We parked Lewis Lewis there after the long drive from Medford, OR. Sleeping at a gentle downslope angle, we hoped not to hear the window tap and see the bright white light of a California Highway Patrol officer’s mag light telling us we can’t overnight park here. But there were no rude awakenings or spicy dreams about Officer Poncherella, and we rolled out early, arriving at 7am to the Santa Cruz Homeless Garden Project‘s Natural Bridges Farm on the north side of Santa Cruz, Calif.

Within a few minutes, we were eating breakfast strawberries and drinking coffee with David, one of the farm’s trainees. By nightfall, we would be back in the same spot sipping bourbon and eating dessert strawberrries with the farm director. As usual, it’s what happens between the coffee and the toddy that makes up a day.

The Homeless Garden Project is a 20-year-old success story that began as a small plot and a thousand donated herb plants tended by a few homeless men and women. It now employs 14 homeless trainees and provides weekly CSA shares to over 80 members of the Santa Cruz community.

People might wonder if the name isn’t demeaning. Yeah, we get that sometimes,” says Paul Glowaski, 31, farm director. “But at some point you’ve got to stand up and say, ‘This is who we are, we’re people.'”

The Homeless Garden Project is not a charity case. It grows beautiful organic produce to rival any small farm’s in the country — deep shades of purple and maroon and green and yellow in the rainbow chard rows, artichoke stalks as tall as a man, strawberries the size of crabapples, kale, broccoli, squash, lettuce, spinach, bok choi, lavender, wheat (they make pancake mix), and rows of cut flowers. It just so happens that homeless people, given a chance at gainful employment for up to three years, are the ones moving the plow, lining the irrigation tubes, harvesting the goods, learning job skills, and enjoying the satisfaction of responsibility and community.

The farm is about to go crazy. Already the strawberries are lying fat and drunk in their sugary juices. The trainees — the term for employees — crouch between the rows and pluck them off, chatting and laughing. Robert, a Santa Cruz Homeless Garden trainee, in the shelter where he now lives.Robert arrived two months ago when he took a bus away from San Francisco and the bad scene he’d fallen into there. He’s lean and he smiles a lot. His voice is deep as a blues singer, but still all young and caramel smooth. He walks or takes the bus here from the homeless shelter, and he saves his money from the hourly farm wage he gets for working 20 hours a week. His training program began in early spring. He tells us about how amazing it feels to plant something, watch it grow, then pull it and share it with someone.

Darrie Gaznhorn has been the executive director of the Homeless Garden Project for almost the entire 20 years. She works in the project’s gift shop in downtown Santa Cruz, for which trainees make wreaths and candles and other value-added farm wares during the winter. Gaznhorn’s worked with hundreds of trainees, and she’s seen some move on to success and others slide back down the wrong side of life. Although HGP doesn’t call itself a horticultural therapy project, therapy and recovery — in addition to concrete job skills — are intrinsic in a farm.

“Food has incredible meaning for survival. It’s so needed and tangible and there’s such satisfaction in planting a seed and seeing it grow. You see results,” she says. “People say that when they’re weeding, they’re throwing away the bad thoughts. They see the clean row in front of them and this pile of bad stuff off to the side. Farming and providing food for people is an honorable thing, and it’s very healing.”

We stand at the edge of the Sonora wheat, a 16th-century heirloom seed brought up the coast by the Spanish missionaries and cultivated at HGP. Glowaski talks about his generation — our generation — and how it has a different approach to the nonprofit world than the one established by our parents’. He doesn’t like asking for money, preferring instead to aim for the new buzz in business planning: the Triple Bottom Line, the triangle formed by ecological, social, and economic values. It’s easy to see businesses that miss the ecological and social part; just watch the news. But many nonprofits, especially production urban farms, no longer want to settle for fundraisers and grants; they want and need to hit the economic corner of the triangle.

The sun takes its time setting and the wind is cold. The trainees have left but Glowaski’s still here. This is his time to chill. He says at this crepuscular hour the farm reveals itself in a brief moment of soft colors when everything alive is moving, either coming or going.

Leaving biodiesel Shangri-La for a farm amidst suburbia

January 2011 update: Many of the photos have been removed from this series so they can be published in a Breaking Through Concrete book, forthcoming this year from UC Press. By David Hanson A grease bus breaking down in Berkeley … 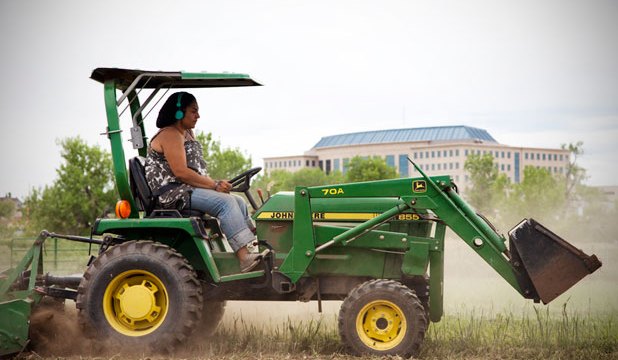 January 2011 update: Many of the photos have been removed from this series so they can be published in a Breaking Through Concrete book, forthcoming this year from UC Press. When we were still in Seattle, preparing for this project, …
See all articles in this series