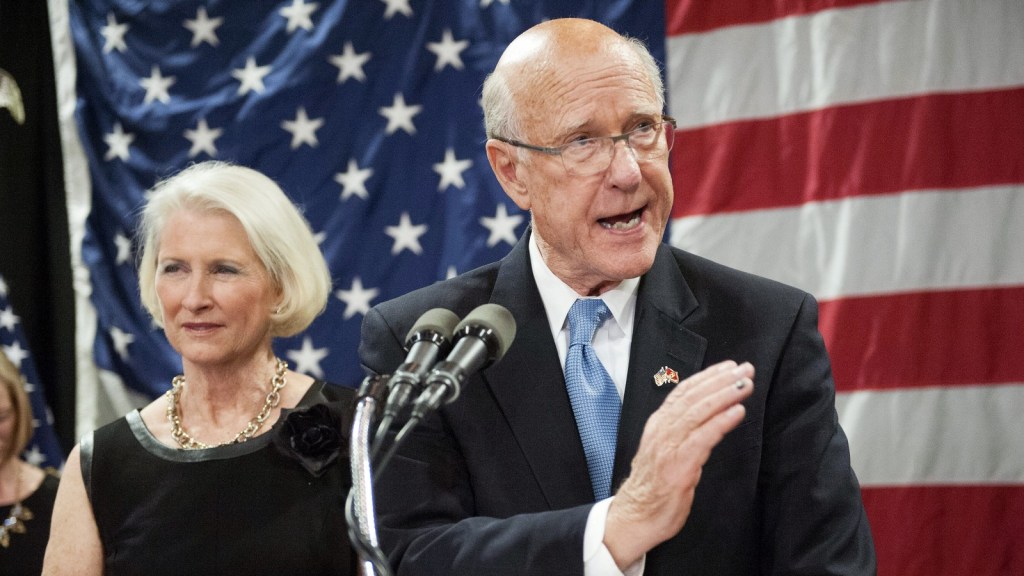 The Senate may soon scuttle state laws that force food companies to put GMO labels on their packages. The Senate Agriculture Committee just voted 14-6 to move a bill blocking state labeling laws to the full Senate. A similar bill has already passed in the House.

Three of the nine Democrats on the Senate committee and all of the Republicans voted in favor of the bill. When the situation was reversed in 2013 and the Senate was voting on an amendment to make GMO labeling mandatory, all the Republicans and 28 Democrats voted against it. If most of those Republicans and a few of those Democrats vote against labeling now, the bill would pass. If this bill becomes a law it would quash a slew of local initiatives, including a labeling law in Vermont which kicks in July 1.

For years, anti-GMO advocates have been using the voter initiative process to put labeling on state ballots. The result has been the same every time: Food and farming companies spend loads of money campaigning against them and the initiatives fail. So activists in Vermont took a different route. In 2014, instead of using the initiative process, Vermont passed its law through the legislature. The food industry promptly sued the state and, while that case is still in the works, the judge decided not to put the law on hold. As a result, nearly every processed food item sold in Vermont will have to be labeled before July 1 (specifically, ingredients derived from mainstream corn, soy, papaya, sugar beets, or canola). That prospect is bumming out the food industry, because it would have to put cover-your-ass “may contain” labels on all its products, just on the chance that they end up in Vermont.

In an effort to broker a national compromise over labeling rules, Agriculture Secretary Tom Vilsack has been meeting with leaders of opposing factions over the past month. But Vilsack wasn’t able to find common ground. Pro-labeling forces want a mandatory, front-of-the-box labels, while anti-labeling forces want a voluntary standard. Faced with this stalemate, Kansas Sen. Pat Roberts (R) charged ahead with the current bill.

Roberts may have abandoned negotiations because the clock is ticking on Vermont’s July 1 deadline. Last week, he told the Topeka Rotary Club last that the Vermont law would cause chaos. “We have to have the USDA have a label that is standard for everybody or we’re going to have the food industry crashing and a big wrecking ball coming down,” he said.

I haven’t been able to get anyone to explain exactly why that apocalypse would occur. When I asked Roger Lowe at the Grocery Manufacturer’s Association he sent me this video of Vilsack’s explanation. Essentially, Vilsack is saying that if every state has own labeling rules, interstate food commerce would grind to a halt. But at this point there’s just one state with labeling rules, and companies could comply with a simple (if dumb) “may contain genetically modified ingredients” label on everything. The Corn Refiner’s Association estimates that simply changing the packaging design for these CYA labels would cost companies $3.8 billion, which sounds like a lot but nets out to just $50 per family of eaters (and keep in mind that this organization has an incentive to inflate its estimate).

Roberts’ bill could garner bipartisan support because GMOs don’t divide people along the usual party lines. That may seem like a bold assertion, because, among media pundits at least, the anti-GMO position is certainly associated with the left. Yet liberal stalwarts perplex those pundits by voting against GMO labeling. Why? Well, there’s abundant evidence showing that politics don’t predict the average American’s position on GMOs. When a study confirmed this lack of a partisan divide, Dan Kahan, a Yale professor who studies the way tribal affiliation affects thinking, blogged that it shows:

[for] the 10^7 time that there is no political division over GM food risk in the general public, despite the constant din in the media and even some academic commentary to this effect …

Ordinary Americans — the ones who don’t spend all day reading and debating politics — just don’t give GM food any thought. They don’t know what GM technology is, that it has been a staple of U.S. agricultural production for decades, and that it is in 80 percent of the foodstuffs they buy at the market.

Kahan goes on to predict that Congress will pass a bill blocking state labeling laws, that Obama will sign it and that less than 1 percent of the U.S. population will notice.

But what about those polls showing that big majorities of Americans want GMO labels? Won’t that scare senators straight? The problem with those polls is that, if you ask people whether they want any kind of label they generally say, sure, why not! You are proposing a positive, without discussing the negatives. It’s like offering people free newspapers — hey, want more information? Big majorities of survey respondents also say, nonsensically, that they’d like mandatory labels for food containing DNA.

Pro-GMO advocates worry that a label will become the mark of Cain. People might see labels, and think, I don’t know what this is, but it must be bad!  And it won’t matter if the GMOs in question are ones that primarily lined the pockets of big agribusiness or primarily helped small farmers grow food more sustainably.

Many anti-GMO advocates agree that it would be the mark of Cain, and want labels expressly for the purpose of campaigning against GMOs.

In the middle are people like me, who think that labels will normalize, rather than stigmatize, GMOs. Also in the middle is Sen. Debbie Stabenow, the ranking Democrat on the Agriculture Committee, who voted against this bill. She supports a federal standard that would block state labeling laws, but she also wants to honor the desire for transparency. So she wants a federal law that would make GMO labeling mandatory but unobtrusive. For instance, companies could put GMO information on their website, rather than slapping a skull and cross-bones warning sign on the front of every box.

Stabenow could be the key to this whole thing, because she is a key wrangler of Democratic grain-belt votes. I’m inclined to think that Roberts needs to compromise with Stabenow to get this passed. On the other hand, if most Republicans and a few more Democrats sign on, this could sail through the Senate, even without her help.