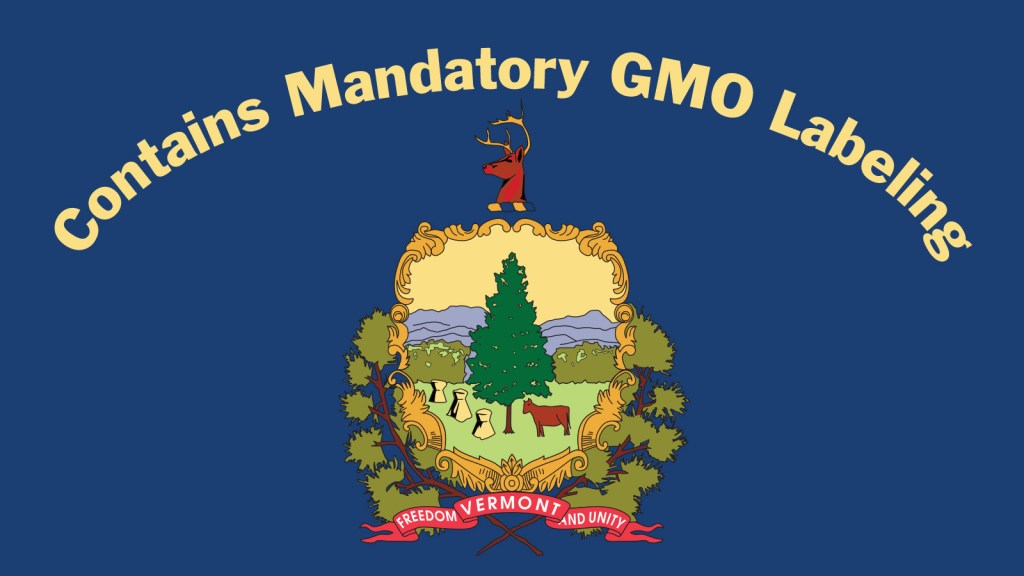 Vermont is the first U.S. state to require the mandatory labeling of food produced using genetic engineering. Maybe I shouldn’t get ahead of myself — it’s not official yet, but the state House and Senate passed the bill with overwhelming majorities (114-30 in the House, 28-2 in the Senate), and the governor has said he looks forward to signing it.

The law requires retail products to have a label by July 2016 if they contain genetically engineered ingredients. Enforcement of the law will go through the state attorney general’s office, said Falko Schilling, consumer protection advocate for the Vermont Public Interest Research Group, which backed the bill. The bill also prohibits the use of a “natural” label on foods that contain genetically engineered elements. The rule will primarily affect processed foods — such as cereal and bread — where it can be difficult to impossible for the producer to know whether the ingredients, like corn starch and sugar, are GE or not.

This makes things interesting. Several New England states have been tiptoeing around the issue, passing or considering labeling laws that only kick into effect when enough other states join them, so they might collectively defend against food-industry lawsuits. At the same time, the food industry is working on a federal law that would lay out the ground rules for voluntary labeling of GMOs, while also nullifying state labeling rules. Each side has been eyeing the other, and quietly fortifying its position. Now it may get very noisy.

Vermont Gov. Peter Shumlin elliptically alluded to the fact that the state could be sued over this law. On his Facebook page he wrote: “There is no doubt that there are those who will work to derail this common sense legislation.” Which makes it sound like he’s prepared to defend the law in court.

It also ups the ante on the push for a federal voluntary labeling law. When there were no mandatory labeling laws on the books, it may have been a little easier to talk about the federal effort as a simple measure to insure that we had one standard across the entire U.S.. But now the fact that the legislation would also preempt and invalidate Vermont’s law will have to become part of the conversation.

There’s a whole swarm of issues surrounding genetically engineered food. If you think it’s just about your right to know, or your right to inexpensive food, you might want to read my attempt to cut through the debate. I think there are some good reasons to label GMOs. But if I were in charge, there are plenty of other, more important measures of agricultural and nutritional quality that I’d choose to label first.