So, Nietzsche and an Alaskan fisherman walk into a bar ... 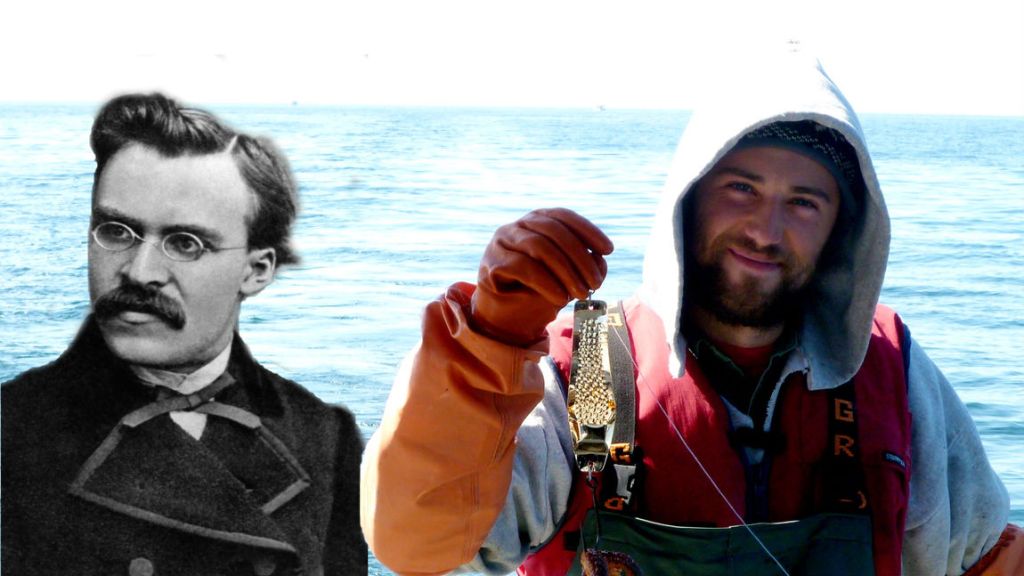 So, Nietzsche and an Alaskan fisherman walk into a bar …

Dylan Hitchcock-Lopez was raised “on a fishing boat” in Sitka, Alaska, but ended up leaving to study philosophy at St. John’s College in Santa Fe. Now that he’s returned to his hometown to help out as a broker for his family’s fishing business, which plays a part in Alaska’s $4.6 billion commercial fishing industry, the connection between these two seemingly incompatible spheres of his life has become clearer to him.

“I could be a bit of an advocate for the fishermen up here, who didn’t have the luxury of really being able to connect with people in other places, and I could be kind of a go between,” says Hitchcock. “And frankly, I enjoy that more than I enjoy fishing. I like to be able to pause a little bit and think about it and talk about it … I think that issues like climate change and sustainability and food security are really important, and that thinking about what we eat and getting more philosophical about it is an important part of daily life.”

After a thoughtful interview with Hitchcock-Lopez, I wondered: Can philosophical thinking indeed help the fishing industry prepare for — and fight against — warming waters? And what would a friendly chat between Friedrich Nietzsche and Hitchcock-Lopez look like, anyway? Here’s an edited and condensed version of what the philosofisherman had to say — and what we imagine Nietzsche might add:

On how consumer awareness can change our seafood:

Hitchcock-Lopez: People just really seem to pay attention to the price tag, and I think that’s really what needs to change. I think [we need] a little more awareness about consuming less seafood, consuming domestic seafood, and [that] the foreign options are, by and large, really not that great. If the consumer becomes interested in climate change, then the fishermen will adapt as well. But when they’re being out-competed by the global fish market — aquaculture and fish farms in China and Chile and Norway — then they’re going to have a hard time thinking about something like climate change when the consumer doesn’t seem to demand any awareness.

One of the startling statistics about the consumption of seafood in this country is that, depending on what resource you’re going with, between 92 and 98 percent of all seafood consumed in America is imported — much of it from China. We have this huge industry that’s based around production in countries that we don’t control, standards that we are not aware of, and then shipping it back and forth.

Nietzsche: Everything which distinguishes man from the animals depends upon this ability to volatilize perceptual metaphors in a schema, and thus to dissolve an image into a concept.

On knowing what’s actually on our plates:

Nietzsche: Are designations congruent with things? Is language the adequate expression of all realities? It is only by means of forgetfulness that man can ever reach the point of fancying himself to possess a “truth” of the grade just indicated. If he will not be satisfied with truth in the form of tautology, that is to say, if he will not be content with empty husks, then he will always exchange truths for illusions.

Hitchcock-Lopez: I was just reading a study that came out [last year] from Oceana, and it said that, on average, a third of all seafood sold in the U.S. is mislabeled. That our food regulatory system can’t even make sure that the right label is on the product is a big issue for me. So I think people need to start thinking a little bit more about this stuff that just kind of comes across their plates. People have this view of seafood that you throw a net down in the ocean, and you pull it up and there’s a bunch of stuff and you eat it. And that’s something that I think needs to change.

Hitchcock-Lopez: I think the people who are sort of on board with the science of climate change are already talking about it. But fishing, like a lot of extraction-based industries, tends to be a bit more conservative-minded. You have the fishermen who just don’t really believe in it because, at this stage in the game, you can kind of see whatever you want to see. Oceans are so mutable — they’re constantly changing year to year — that it’s really easy for people to ignore. You have other people, who, probably rightly so, are very concerned about this. There are people who are a little alarmist — [for them], everything becomes a sign of climate change. I see both of those attitudes on a daily basis.

Nietzsche: The pride connected with knowing and sensing lies like a blinding fog over the eyes and senses of men, thus deceiving them concerning the value of existence. For this pride contains within itself the most flattering estimation of the value of knowing. Deception is the most general effect of such pride, but even its most particular effects contain within themselves something of the same deceitful character.

On a more sustainable fishing industry:

Nietzsche: We are, all of us, growing volcanoes that approach the hour of their eruption; but how near or distant that is, nobody knows — not even God.

Hitchcock-Lopez: Maybe a hopeful sign we could look at is that over time, [there has been] this shift in how the fish stocks are regulated and managed. We have seen that fishermen are much more likely — [though] they might grumble about it — to pay attention to what biologists are saying. You know, “You can’t catch more than this number of fish this year, otherwise we’re not going to have a return year.” And they’ve definitely learned that if you want to have sustainable industry and you want to come back in a couple years, you’re going to listen to the science on it. And I think that might be a good sign [for the] community. Perhaps that conversation on climate change isn’t happening as it needs to be yet, but we’re kind of as an industry moving in that direction.