The American diet is an exercise in extremes. How can we find the middle ground? 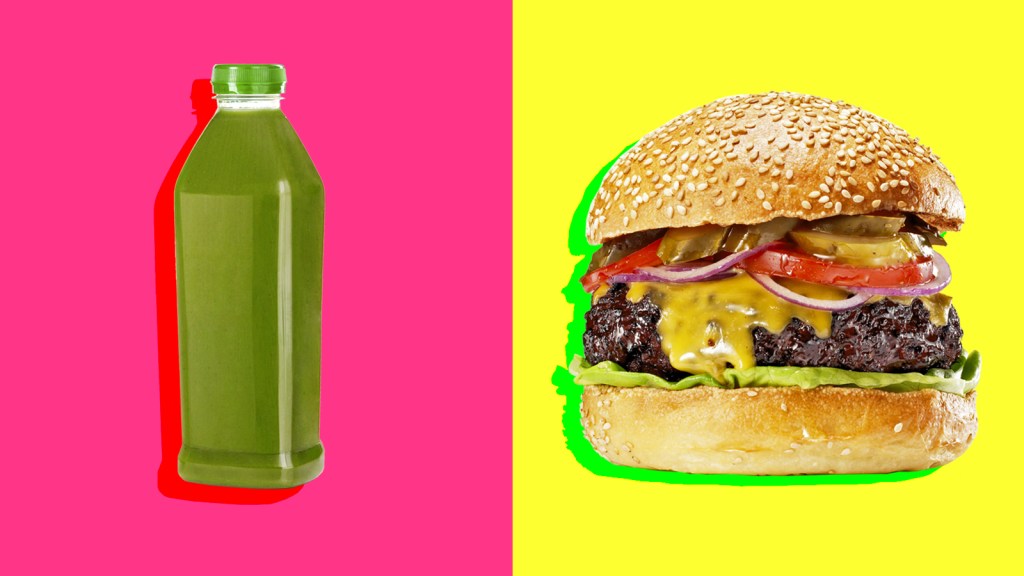 The American diet is an exercise in extremes. How can we find the middle ground?

What defines American food culture? It’s a question with any number of suitable answers. “Melting pot,” for one; The Melting Pot, the national chain fondue restaurant that traffics in such delicious cardiovascular assaults as “Top Shelf Fiesta Fondue” and “The Flaming Turtle” (??), also works. Our national culinary values are, in sum, extremely nebulous, pretty over-the-top, and by most medical standards, full of things that are not good for your body — no shade to molten dairy products.

But Sophie Egan, director of programs and culinary nutrition for the Strategic Initiatives Group at the Culinary Institute of America, may have hit on what unites all of our diets. In her new book Devoured: From Chicken Wings to Kale Smoothies — How What We Eat Defines Who We Are, Egan identifies one of the fundamental things we have in common: the roided-up American work ethic, which is either the source of our inevitable demise or the key to our national success, depending on who you ask.

“I felt tired of hearing that there’s nothing that really unites us on a national level as eaters,” Egan told me by phone. “And I set out to find out what those [shared] traits and values and ways of relating to food really were.”

In her book, Egan argues that many of the ways in which our food culture has evolved — and the ways in which our agricultural systems and national health have devolved — can be connected back to convenience. That, in turn, is easily tied to mushrooming work weeks (fully half of salaried employees report working more than 40 hours a week in the United States). The relationship is pretty intuitive: The more you work, the less time and energy you have to put into preparing a real meal with, like, salad.

But it goes deeper than that. Egan discusses how companies encourage their employees to stay at their desks with a king’s ransom of snacks: “Culturally, we think of candy (and especially chocolate) as essential furniture of the work environment.” In the case of tech giants like Google and Facebook, full-service restaurants are used not only to lure top programmers, but also to keep them on company grounds as much as possible. And the market for pre-frozen, handheld foods that you can eat tragically, alone at your keyboard, is now worth $2.7 billion.

This is one end of the spectrum — the all-nutrients-included protein bar, shoveled down in between meetings to achieve a bare minimum of sustenance. At the other: Standing in line for two hours for chicken and waffles and bottomless mimosas at the latest addition to the Eater 38. And then, inevitably, punishing oneself for all that fried food and bubbly with a juice cleanse.

Enter the other thing Americans have in common when it comes to what we eat: “We really take everything to the extremes,” Egan explains. “I attribute that kind of Jekyll-and-Hyde type of deprivation-indulgence, those internal dialogues — you’ve been a good girl, you’ve been a bad girl, you deserve this cookie, you must have this salad — very much more to the inability to just stay put in the middle with the boring-but-timeless: ‘Everything in moderation.’ We spend very little time in that middle zone.”

Yes, we are a nation that demands the latest in Victoria’s Secret Angel dieting tips (tl;dr: don’t eat) in the same breath as we place our orders for Guy Fieri-esque monstrosities. Egan would argue that both tendencies have put us in a real pickle with regard to our current food system, which threatens both human health and the climate.

But she’s not at all surprised that people are hesitant to adopt more ecologically sustainable and healthy practices. As she puts it, “I fear that some of the dialogue that happens around food systems change and tackling the obesity epidemic presents this [argument of]: ‘We have to get rid of everything we’ve got going in order to fix things.’ And it just feels so unattainable to many people.” It’s hard to fathom doing away with large-scale, antibiotic-intensive cattle farming when you consider that the average American eats nearly 100 pounds of red meat per year (although that figure is on the decline).

But instead of leading with monoculture, Egan thinks those advocating food-system reform might do better to focus on … culture. We are never going to be France or Sweden, Egan adds — countries that prize good food, communal eating, and yes, better work-life balance — and if we’re going to actually change our food system in meaningful ways, we have to embrace that. Which brings us to the national event consistently demonized by most remotely eco- or social-justice-conscious contingents: The Super Bowl.

Are metric tons of seven-layer dip and buffalo wings going to save our food system? Definitively not — but embracing the communal nature of indulging in said dip and wings, valuing the experience of eating, could be a step on the way to doing so, Egan says. “It’s certainly not a really mindful dinner, but it is in people’s homes, and there’s a variety of things that really do have that same very comforting feeling of a holiday,” she explains. “[I wanted to] peel back deeper layers of meaning to the Super Bowl beyond its commercialism, and the zillion-dollar ads — because clearly if it’s that many eyeballs, that many people caring about something at one moment in time, there’s more to it.”

As Egan tells me: “Any chance that we have of shaping the food system really requires first understanding on a deep level how sometimes subconscious cultural norms affect the way that we eat.”

At the end of the day, Americans might not eat the same things, but we eat in the same bizarre ways: slumped at our desks, huddled over our laptop screens in bed, celebrating or berating ourselves or both. Fundamentally, the most arresting argument of Devoured is this: Perhaps changing our food system really means changing our habits, especially the fucked-up way we work. (I’m writing this at 7:30 pm while snarfing on a Chipotle burrito in one hand [harder than it sounds], so I’m clearly part of the problem.) And yes, that could mean a whole host of reforms: Increasing the minimum wage, for one; not rewarding staying long nights at the office; even instituting (gasp!) paid family leave.

Imagine getting all that and getting to keep the Super Bowl, queso and all. That’s the real American dream, right there.