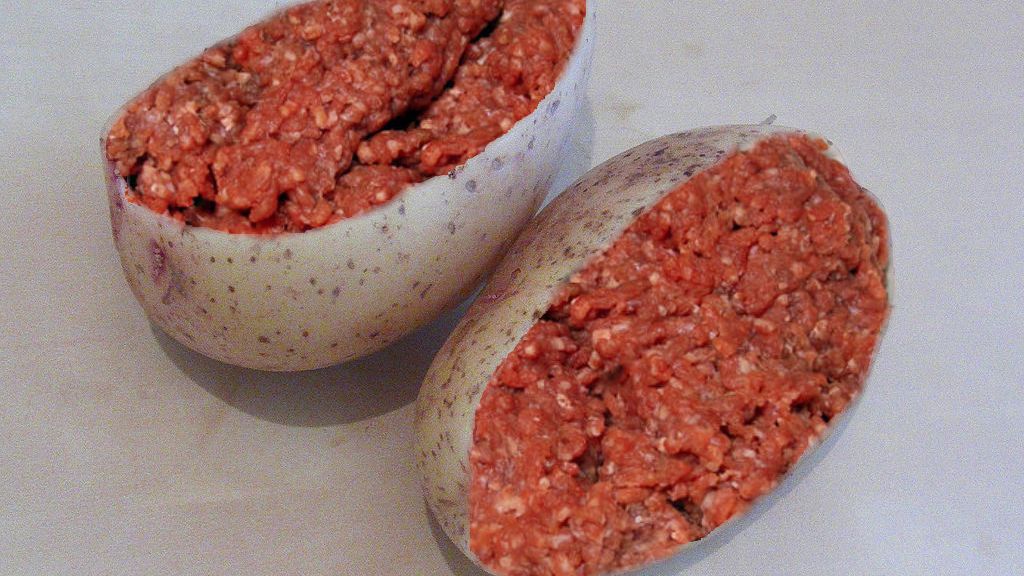 io9 has a roundup of where genetically modified plants could be going in the next few generations, and it’s a heck of a lot weirder than tomatoes with fish genes. Writer Daniel Berleant envisions oak trees that reproduce via spores and wheat that can fix nitrogen in the soil as well as beans, but shit gets really wacky when he starts talking about modifications that would make produce taste better. Here are some of his weirdest visions for the future of food:

Hamburgatoes: If you can make Quorn, a fungus that tastes like chicken, why can’t you make carrots that taste like potato chips, or “potatoes with small hamburgers in the middle”? Presumably this means a small amount of potato-based matter that tastes and behaves like hamburger, but I’m preferring to envision cutting open a potato to find a fully dressed burger on a bun.

Imagine eating an enormous sunflower seed the size of a small egg … hefting its weight in the palm of your hand … cracking off its shell to reveal the rich, tasty meat within … and finally sinking your teeth in to savor its nutritious and distinctive flavor. A future sunflower could produce just a few seeds like that, instead of dozens and dozens of smaller seeds like the sunflowers they used to grow back around 2020.

I can barely imagine this, actually, because I don’t think I’ve eaten an in-the-shell sunflower seed since like 1992, but sure. Sounds potentially bad for sunflower reproduction, but maybe they can just make spores.

Fruits that taste like other fruits for some reason: There seems to be an infinite capacity for genetically modifying fruit to taste like fruit but not the same fruit.

Consider the following future foods: pearapples (fruit transgenic hybrids that taste like apple and pear at the same time), peacherries, nectarmelons (watermelons that taste like nectarines), bananaberries, and so on. If people would eat them, someone will want to create and sell them.

It’s not totally clear why you wouldn’t just eat a nectarine if you wanted to eat something that tasted like a nectarine, but evidently there’s genuinely some call for this; coconuts that taste like pineapples, Berleant points out, are already a thing.